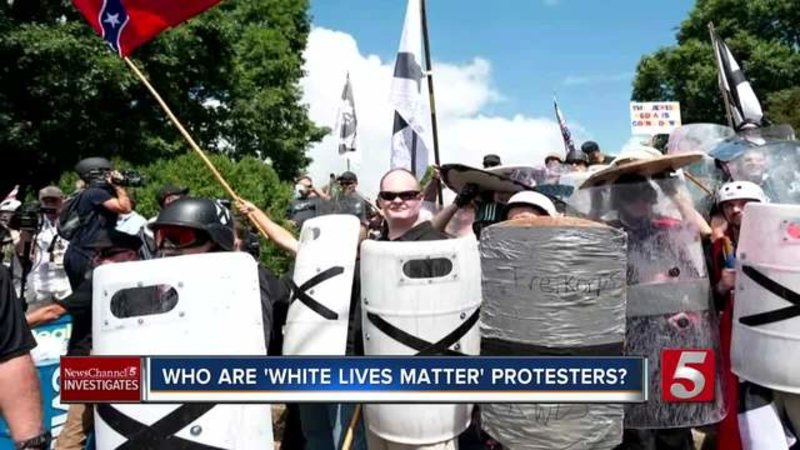 Posted from abc15.com
Posted in these groups:

SSG (Join to see)
Edited 4 y ago
Posted 4 y ago
I sort of like seeing protests where a couple hundred "alt-righters" are met by thousands of counter protestors. They have a right to protest that must be protected, however they should also understand their beliefs are despised by all decent persons.
(4)
Comment
(0)
show previous comments
MSG (Join to see)
4 y
SSG Mark Colwell
Your comments sound good but it isn't true in practice.
While there are those who show hate and prejudice on the right, there are an equal number on the left.
Being conservative or white does not mean you are less tolerant of others or show hate or discrimination. Being black, hispanic, Asian, and liberal doesn't mean you aren't prejudiced or hate others with a different color skin or ethnicity (look around the world, genocides have occurred for these very reasons)
It should be noted that while groups such as SPLC classify religious hate as a alt-right group, ISIS and Muslim religion based terrorist groups and orgnizations should be listed as alt-left but of course, that would show far more left wing hate groups than they would be comfortable with. On the subject of Antifa, again, SPLC has a small section that says they would not classify the group as a hate group since it doesn't meet their criteria.
The left has physically attacked people for simply wearing an article of clothing or being at a meeting or rally. This is not tolerant of freedom of speech or association (1st amendment right)
The left has tried to enact laws and policies that force christians to do something that violates their religious morals such as baking a cake for gays while protecting muslims who refuse to serve pork at restaurants or alcohol. This is not tolerant of christian values (1st amendment right)
The left has tried to enact rules that force businesses and schools to allow individuals who identify as an opposite sex to enter showers and bathrooms of a person who is the opposite sex violating their right to privacy. This is not tolearant of an individuals right to privacy (4th amendment right)
The list goes on. There are many on the left who is not tolerant of anyone that does not share their ideas. They are more than willing to force others to their viewpoint through force, intimidation, or law.
(0)
Reply
(0)
SSG (Join to see)
4 y
MSG (Join to see) - It sounds to me like you have confused your version of "us" and "them" for right and left. For example... you want to classify Muslim terror groups as leftist, even though they are extremely conservative. The left want Muslims in general to enjoy the same freedom of religion as everyone else, and they sometimes align with them when it comes to ensuring their religious liberty, however conservative Muslims, much less Muslim terrorists are no more on the left than extremely conservative Christians.

Antifa is not "the left" anymore than the KKK is "the right." Antifa hates fascists, I guess the SPLC isn't quite ready to list fascists as a protected group. If I walk into a Klan or even a Trump rally wearing a Black Lives Matter t-shirt... there is a good chance I would be attacked. There are hotheads all over the political spectrum.

The left has struggled to ensure equal rights and equal opportunity for all, allowing businesses to discriminate because they don't like someones skin color, religion or sexual orientation isn't right. Comparing Muslims who don't serve pork to Christians who bake cakes for some weddings but not for others is a ridiculous false equivalency. You really think the baker would have been sued if they refused to make any wedding cakes?
(0)
Reply
(0)
MSG (Join to see)
4 y
SSG Mark Colwell
Lets start in reverse order:
1) The baker did refuse and was sued. The case is before the supreme court now. https://www.washingtonpost.com/politics/courts_law/in-major-supreme-court-case-justice-dept-sides-with-baker-who-refused-to-make-wedding-cake-for-gay-couple/2017/09/07/fb84f116-93f0-11e7-89fa-bb822a46da5b_story.html?
utm_term=.10de35b8154a
A court ruled in favor of muslim truck drivers who refused to transport alcohol
https://www.washingtonpost.com/news/volokh-conspiracy/wp/2015/10/23/240000-jury-award-to-muslim-truck-drivers-who-were-fired-for-refusing-to-transport-alcohol/?utm_term=.ea24c0457401
The left picks and chooses who is discriminated and who isn't. If I don't want my daughter taking a shower at school with a boy who says he is a girl, why is my daughters rights less than the boy's? If my son makes straight As at school due to hard work and achieves a high SAT/ACT, why should he be bumped out of a slot for a prestigious University by someone who made Bs simply because of their skin color? If a privately owned business or church has religious objections against birth control or some other belief, why should they be required to subsidize it?
I disagree with you on Antifa, the group's stated goals and past actions have never against liberals. The members who have been arrested or unmasked have always stood with liberal groups and idenitifed themselves as progressives. I am not aware of any Antifa groups protesting a Liberal speaker. Regarding the T-shirt, again I disagree. There have been numerous Trump rallys, KKK rallys, supremacist rallys, etc in the past 10 years. There has seldom been any violence except when "counter protesters" decided to initiate violence. Otherwise, the groups did their march, waved their flags, and went on theri way. Much of the recent violence has came from groups on the left which included Antifa and BLM.
While all religious groups should have the freedom to practice their faith according to their belief, the left tends to suppress the Christian belief while promoting the Muslim belief.
FYI, Polls going back 10 years have consistently shown Muslims overwhelmingly vote Democrat.
http://www.pewforum.org/2017/07/26/political-and-social-views/

The government argues the baker cannot be compelled to use his talents for something that conflicts with his religious beliefs.

(0)
Reply
(0)
SSG (Join to see)
4 y
I don't agree with the Muslim alcohol case, unless the Muslim truck drivers made it clear when they were being hired that they would not transport alcohol. That said, it is still a completely different situation. The cake case has more in common with businesses refusing to serve black during segregation than with an employee who decides that part of their job violates their religious principles.

"The Left" is at least as diverse a group of opinions as there is on the right, it isn't a matter of picking and choosing... it's a matter of honest disagreement when one individuals civil liberties appear to violate the rights of another. Both Antifa and the ACLU are on the left, while on the one hand the ACLU defends the rights of the KKK to march and speak, Antifa believes that whenever possible fascists should be denied that right. I happen to agree with the ACLU on that issue, however I know of some who do not.

Antifa is not a group. It is a movement with many groups, their goals, their beliefs and their activities vary depending on the individuals who happen to be in leadership roles within those groups. Its very easy to cherry pick one group who calls itself Antifa and smear the rest, sort of like some might try to use Westboro Baptist to smear all Baptists.

The selection of Linda Sarsour to address the graduates of the City University of New York School of Public Health has resulted in hate messages and threats of violence.

MAJ James Woods
Posted 4 y ago
Wow! All the best, 1SG (Join to see), do hope no one gives this group the confrontation they are looking for. They want a fight and some knuckleheaded Anti-Fa group is going to take the bait. Not a good situation at all.
(2)
Comment
(0)
Show More Comments
Read This Next
RallyPoint Home