A sheep which is the mascot of a British Army regiment has been promoted at a ceremony marking its formation.

He was awarded his honour by the colonel of the regiment, Brigadier Andrew Williams.

The Swaledale ram, who is officially classed as a soldier, received his promotion for "good behaviour".

He is the 30th in a line of mascot rams running back to the Indian Mutiny War in the mid-19th Century.

The first Private Derby was acquired in 1858 by the 95th (Derbyshire) Regiment of Foot and became the mascot of the Mercian Regiment when it formed in 2007. 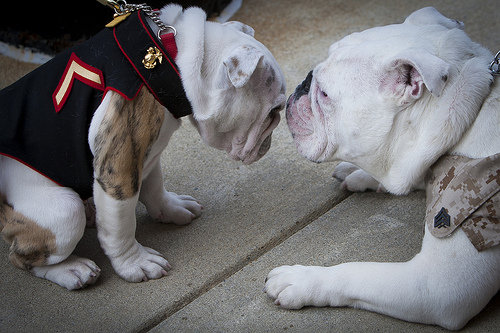 Back in September of 2013, Sgt Chesty XIII was retired from active duty. His replacement PFC Chesty XIV was immediately promoted to LCpl. I understand the younger Chesty has been since --both demoted back to PFC AND promoted to LCpl. Providing he does nothing to soil the parade deck at "8th & I," it is my understanding that Chesty XIV may be in-zone for Corporal's chevrons.
(3)
Comment
(0)

LCDR (Join to see)
Posted >1 y ago
I mean... why not? He probably has a whole lot of time in service (goes to look it up). Yeah been serving since 1858 (in uh... different incarnations) and doesn't seem to have any disciplinary actions. Really he is way overdue for promotion. I hope he gets all the backpay due him.
(1)
Comment
(0)
Show More Comments
Read This Next
RallyPoint Home