China says the United States is "militarizing" the South China Sea. Does it have a valid argument? 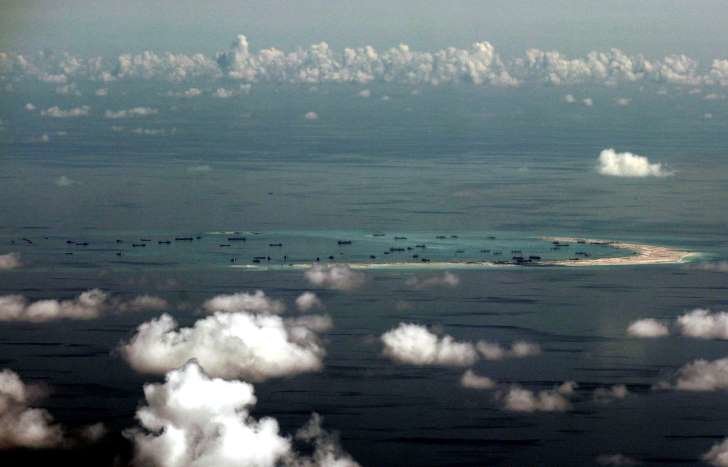 China's Defense Ministry on Thursday accused the United States of "militarizing" the South China Sea by staging patrols and joint military drills there, ramping up the rhetoric ahead of a key regional security meeting in Malaysia next week.

China has repeatedly urged Washington not to take sides in the escalating maritime dispute over the area, where the Asian giant last year stepped up its creation of artificial islands, alarming neighbors and provoking U.S. criticism.

Washington has demanded China halt land reclamation and militarisation of the disputed area and pursue a peaceful resolution according to international law.

China has been angered by U.S. navy and air force forays through waters it claims as its own, especially this month, when U.S. Navy Admiral Scott Swift said he joined a routine surveillance flight.

The United States has also stepped up military contacts, including drills, with regional allies such as the Philippines, which also has claims in the South China Sea.

The United States was hyping up the "China threat" and attempting to sow discord between China and other claimant countries, Defense Ministry spokesman Yang Yujun told a monthly news briefing.

"China is extremely concerned at the United States' pushing of the militarisation of the South China Sea region," he said. "What they are doing can't help but make people wonder whether they want nothing better than chaos."

For a long time, the United States had carried out frequent, widespread, close-in surveillance of China, by sending ships and aircraft to the region, he added.

http://www.msn.com/en-us/news/world/china-says-us-militarizing-south-china-sea/ar-AAdHEjg
Posted in these groups:

SFC Mark Merino
Posted 7 y ago
They can't have it both ways. If they start making islands all around sovereign nations then they have a lot of moxy to ask for us to stay out of it.
(3)
Comment
(0)

CW3 Stephen Bacon
7 y
The only reason they have the "Moxie" as you describe is because our foreign policy is a paper tiger in its current form.
(1)
Reply
(0)

LTC Stephen F.
Edited 7 y ago
Posted 7 y ago
Well GySgt Wayne A. Ekblad Militarizing is somewhat of a vague station for one of the older superpowers to be leveling at another since we both operate in areas removed from our borders. WE have been training and patrolling in the South China Sea since WWII.
Chine is pushing for hegemony in the Spratley Island region where it wants to control the substantial oil and natural gas reserves.
(2)
Comment
(0)

SSgt (Join to see)
7 y
The Chinese are actually creating artificial islands out there in order to further protect that area. The other problem with their control of that area is that it interferes with international shipping routes and would deny American naval power passage through the area.

SrA Art Siatkowsky
Posted 7 y ago
I think we need to step up the fly bys like we did today with the B52s.....soon as we let up they will lay claim to that region.
(1)
Comment
(0)
Show More Comments
Read This Next
RallyPoint Home