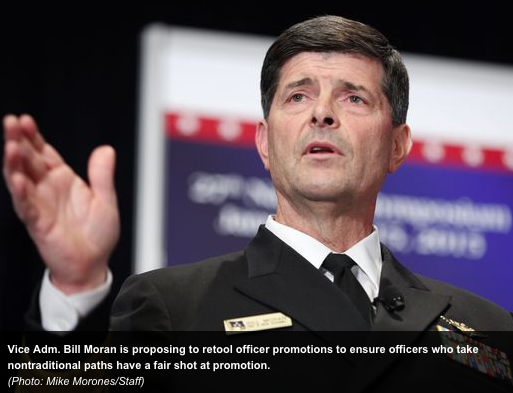 The Navy has been using the same promotion system since 1947 and the service's top personnel officer thinks it's time for a change.

Vice Adm. Bill Moran, the chief of naval personnel, is proposing to retool officer promotions to ensure officers who take nontraditional paths, whether in their jobs or education, have a fair shot at promotion in the Navy's up-or-out system. He also wants enlisted to get more training throughout their careers, rather than just a data-dump at the start.

In a Wednesday speech before the Surface Navy Association's symposium, Moran said it's time for a new approach to officer promotions, one that rewards experience and education for officers rather than penalizing them for taking some time out of their prescribed track.

"All humor aside, this is kind of a reflection of the system we have in place. You wait your turn," Moran said. "Sometimes it moves slow, sometimes it picks up the pace, and in the end, you wonder if you're going to be picked up."

"Your talent, your skill set, your education, do they matter in this kind of style, or do we need to change it?" Moran continued.

The year-group system isn't serving the Navy's officers the way it used to, he said.

"You could argue that we don't have a lot of choice in the Navy today for a junior officer," Moran said. "You know what your golden choice is, and you better not veer too far off that path, because you'll lose your spot in line."

Rather than rewarding those who take a fellowship or pursue a graduate degree, the Navy forces officers to compete with their original year group, whose members might have racked up more sea time or leadership roles in the same period.

"If we just throw them right back in the year group they left with, they're done," Moran said.

Some of those timelines are mandated by law, but Moran said that congressional staffers he's spoken to about redrawing the lines have been receptive to ideas.

On the enlisted side, Moran said, 12 percent of boot camp graduates make it to 20 years. Though recruiting, in both numbers and quality, is at an all-time high, the Navy's 98 percent fill and 92 percent fit statistics can be misleading, Moran said.

It can be more than two years before a recruit hits the fleet, from boot camp to "A" and "C" schools. For the average sailor, he said, they're getting all of their job training at 18 or 19 years old.

After a couple of sea tours, the average sailor goes ashore, and not necessarily to do the job for which they are trained. Though the Navy has enough of these sailors to send back to sea, their training may not be up to date.

"We've got more people, but you're not necessarily giving me the guy or the gal with all the training or experience," he said. "And oh, by the way, it's a second or first class petty officer who hasn't been doing this for a while."

However, the Navy always sends officers to school in between shore and sea duty for a refresh.

Moran did not lay out a timeline for the changes, but said the discussion is ongoing within the personnel community and on the Hill.

However, budget pressures and 13 years and counting at war create a situation where the Navy needs to get creative about cultivating and retaining its talent.

http://www.navytimes.com/story/military/careers/navy/2015/01/14/admiral-bill-moran-naval-personnel-enlisted-training-officer-advancement/21755707/
Posted in these groups:

PO1 (Join to see)
Posted 6 y ago
Good article, refreshing to see the brass make these statements. After a shore duty nowhere related to your job, ie recruiting, pushing boots, etc etc, it'd be tough to go straight back into work without that refresher training. Maybe have it a strategic points in your career, after 2 tour, or every 6 years?
(3)
Comment
(0)

PO3 Jonathan Cooper
6 y
I've seen a few PO1s who have transition issues coming from prior commands where they didn't do their original jobs. This is a great for technical/in-rate refresher (granted if you're studying fo r advancement, you should still should be sharp-ish.) Although most E-5 or E-6 are more in leadership roles, the additional training couldn't hurt.
(0)
Reply
(0)

PO1 (Join to see)
6 y
I could definitely see this being a great resource for the really technical rates such as ET, IT, CTN, etc etc. Big Navy wants us all to constantly be learning and advancing our education, why not keep up with it on their side as well?
(0)
Reply
(0)

CPO John Sheuring
Posted 6 y ago
Someone is thinking "outside of the box" here. Many careers in the Navy have been sidetracked because of wanting to do extra duty; Recruiting, Drill Instructor, Going back to school" and you get sent to the end of the line and have to start over. It is time for Officers and Enlisted personal were looked at from the perspective of the total package instead of blinders on. I applaud the Officer for sticking to his idea on this process, maybe for those still in the Navy, they could benefit with a new process of evaluation.
(2)
Comment
(0)

PO1 (Join to see)
Posted 6 y ago
In the IT rating we need a refresher every few years. Especially with the way we can transition from Radio to APD and vice versa. Even going to a NCTAMS can completely knock you off your feet with the amount of knowledge that you have to take in to become a valuable worker.
(1)
Comment
(0)
Show More Comments
Read This Next
RallyPoint Home