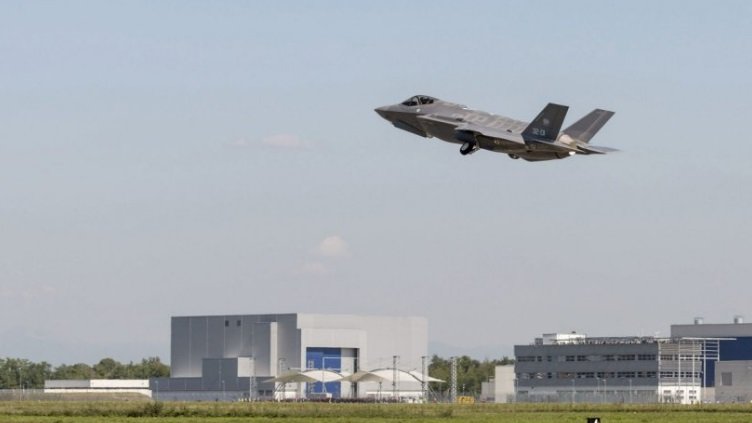 The Lockheed Martin F-35 Lightning II Joint Strike Fighter (JSF) flew outside of the United States for the first time on 7 September, with the maiden flight of aircraft AL-1 from the Cameri final assembly and check out (FACO) facility in Italy.

AL-1, which is the first F-35A for the Italian Air Force (Aeronautica Militare Italiana: AMI), flew for 1 h 22 min from the Finmeccanica-Alenia Aermacchi and Lockheed Martin facility.

Production at the Cameri FACO began in July 2013, with AL-1 rolling off the line in March of this year. This aircraft will be formally handed over to the AMI before the end of 2015.

As well as manufacturing conventional take-off and landing (CTOL) F-35A and short take-off and landing (STOVL) F-35B aircraft for Italy, the FACO will also build F-35As for the Netherlands. Further to their final assembly work, Finmeccanica and Alenia Aermacchi are also responsible for building 835 wingsets for the global F-35 programme.

Italy has a requirement for 60 F-35As and 30 F-35Bs to replace its Panavia Tornado, AMX, and McDonnell Douglas AV-8B Harrier II aircraft. With final assembly operations having begun at Cameri in July 2013, the US Department of Defense (DoD) assigned Italy with F-35 initial airframe maintenance, repair, overhaul, and upgrade (MRO&U) for the European region. Aircraft deliveries from of the Italian FACO are part of the low-rate initial production (LRIP) 6 and LRIP 7 contracts.

The Netherlands has a requirement for 37 F-35As, having officially announced its selection of the F-35 to replace its current fleet of Lockheed Martin F-16 Fighting Falcon aircraft in September 2013. The country bought two jets to participate in the F-35 operational test and evaluation effort, and in November 2014 the Royal Netherlands Air Force changed the command of its detachment at Eglin AFB, Florida, to 323 Squadron at Edwards AFB, California (for Operational Test and Evaluation with AN-1 and AN-2). Dutch industry plays a key role in the international production of F-35 components. Areas of focus include composite in-flight opening doors, wire harnesses, arresting gear, cryo-coolers, radar components, and embedded training software. In March 2015, the country ordered its first eight production F-35As.

The maiden flight of a FACO-assembled F-35 marks an important milestone in the Joint Program Office's (JPO's) efforts to ramp-up production to bring down the aircraft's unit price. With the Cameri FACO now online, the JPO is currently preparing the assembly line in Japan and is expanding the primary facility in Fort Worth, Texas. Once full-rate production across all the facilities is under way by the mid-2020s, the programme should be turning out 17 aircraft a month. This, in turn, will provide the economies of scale needed to get the F-35 down to USD85 million from approximately USD120 million that it is currently.

http://www.janes.com/article/54173/f-35-takes-first-flight-outside-the-united-states
Posted in these groups:

MAJ (Join to see)
Posted 6 y ago
Hard to believe the first assembly and flight was in Italy. Buono!
(3)
Comment
(0)

PO1 John Miller
Posted 6 y ago
What do the aviation experts out there think? Could this bird be an asset to the US?
(3)
Comment
(0)

The Drifters - There goes my baby

I do not own any rights to this footage. This is just a fan video. Full credit for all content, and full ownership belong to The Drifters. Support The Drifte...

https://youtu.be/noFS4_oEakI and on my birthday. I'll wear that pin and patch.
(1)
Comment
(0)
Read This Next
RallyPoint Home