FBI to question 'hundreds of witnesses' in hospital shooting 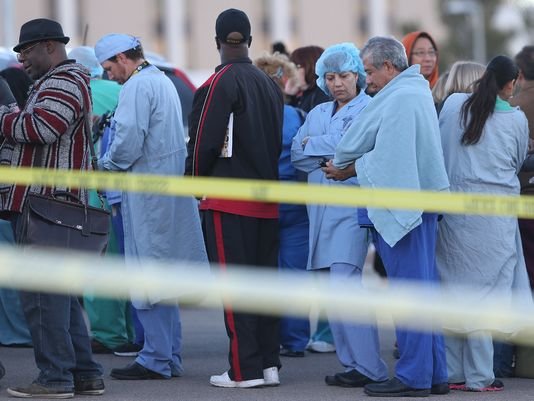 EL PASO, Texas — The FBI will question hundreds of patients at a West Texas veterans' hospital who may have witnessed a shooting that left two people dead, including the suspected gunman, the bureau's top El Paso agent said.

The FBI is leading the investigation of the Tuesday afternoon shooting at the El Paso Veterans Affairs Health Care System near the William Beaumont Army Medical Center. The hundreds of potential witnesses were at the hospital "seeking medical assistance, so we understand the difficulties that this situation presents to them, and we're trying to expeditiously get through those hundreds of witnesses to find out details about this incident," said Douglas Lindquist, special agent in charge of the FBI's El Paso office.

Investigators, who took no questions from reporters during a Tuesday night news conference, did not say whether the gunman killed himself or was killed by someone else. They also provided no details on the victim or the gunman and no possible motive for the shooting.

The clinic at the VA hospital will be closed Wednesday, said its acting director, Peter Dancy.

The VA clinic came under scrutiny last year after a federal audit showed it had some of the nation's longest wait times for veterans trying to see a doctor for the first time. A survey of hundreds of West Texas veterans last year found that they waited an average of more than two months to see a Veterans Affairs mental health professional and even longer to see a physician.

In a statement issued by his office Tuesday, the El Paso Democrat said his "thoughts and prayers are with the men and women at the El Paso VA clinic."

The VA said in a statement that it "is deeply saddened by the tragic situation that has occurred in El Paso, and we are actively working with our partners at Fort Bliss to investigate this matter."

"The safety and continued care of our veterans and the staff will be our focus throughout this situation," the agency said.

Capt Richard P.
Posted >1 y ago
All murders are tragedies. Its always disappointing that each time another murder happens in a "gun-free zone" we are again reminded of our own culpability in allowing these free-fire regions to exist. I still the think the first place to start is by arming the armed forces.
https://www.rallypoint.com/answers/arm-the-armed-forces

Capt Richard P.
>1 y
LTC Paul Labrador Or maybe a big 'novelty' combat knife with unit logos all over it on a display tray?
(0)
Reply
(0)

LTC Paul Labrador
>1 y
@Capt Richard Porter Nah....that is too obvious. Maybe I'll carry my Karambit instead. I've been in love with Karambits ever since I started training in FMA and Silat.
(1)
Reply
(0)

SFC Mark Merino
>1 y
I had a Cavalry saber as a PCS award. The ex wouldn't return it because she needs it for Halloween. That as my office emergency plan. There is NO reason in my mind why a Chief of any department could not be trusted with a sidearm for just such an situation. Got your blood flowing, huh LTC Paul Labrador. Glad you are ok. Have a beer on me.
(1)
Reply
(0)

I will be pcs'ing there in a few short months. This wasn't exactly the story I wanted to see at this very moment. I do however, pray for the families of both the Dr. and Shooter. I am wondering what is motive was to do this.
(0)
Reply
(0)
Read This Next
RallyPoint Home