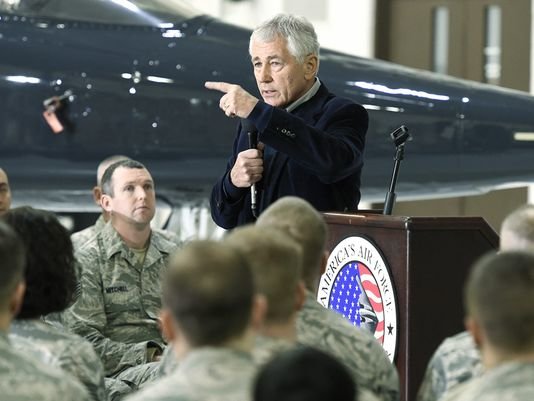 WHITEMAN AIR FORCE BASE, Mo. — Defense Secretary Chuck Hagel told airmen here Tuesday that the nation's nuclear mission is as important as ever and he voiced strong support for the Air Force's plans to build a costly new long-range strike bomber.

On one of his last trips as the Pentagon's top official, Hagel came to this rural air base to speak to the airman who fly and fix the B-2 Spirits, the iconic nuclear-armed stealth bombers. While the aircraft is rarely used in operations, Hagel said it is nevertheless critical to national security.

"It's always about strategic deterrence so that we don't have to send our men and women into conflict," Hagel told several hundred airmen. "Our adversaries have to know and have to believe, and essentially have to trust that we have deterrent capability, that in fact we have everything we say we have."

Hagel said the military should invest billions of dollars in developing a new aircraft to replace some of today's aging bombers, in particular the B-52, which are more than 50 years old. He said the new aircraft program, known as the Long-Range Strike Bomber, or LRS-B, will be well funded in the budget request slated for release in February.

"I think the Long-Range Strike Bomber is absolutely essential for keeping our deterrent edge. … We need to do it. We need to make the investments. We'll have it in the budget. It's something I have particularly put a priority on," Hagel told reporters here Tuesday.

Officially, the Pentagon launched the LRS-B program last year with a request for proposals from defense contractors. But it is widely believed that production of the aircraft is well underway, jump-started with money from classified budgets, according to the Congressional Research Service.

As the Pentagon is facing pressure to cut its budget, the LRS-B is emerging as one of the few big-ticket programs that the top brass remains fully committed to.

For now, plans call for building about 80 to 100 bombers, at a price tag of about $550 million each, to enter the fleet in the mid-2020s. The final design may have an option at flying unmanned. Those new aircraft would likely replace the 76 B-52s in today's fleet.

Hagel is making a three-day trip across the country to visit with soldiers, sailors, airmen and Marines. After resigning in December, Hagel is expected to leave office in February and said he wanted to make some final visits to thank them for their service.

Hagel has paid special attention to the nuclear force during his two-year tenure. The focus was driven in part by scandal. Dozens of nuclear launch officers who operate the Air Force's 450 intercontinental ballistic missiles were disciplined earlier this year for misconduct that included drug use and cheating.

The high-level advocacy for the nuclear mission reflects concerns that morale is suffering and the Air Force is not drawing the best and brightest into the nuclear-related career fields because those jobs lack prestige and offer limited opportunities for promotion.

Like other parts of the nuclear force, the Air Force's long-range bomber community has been marginalized to some extent during the past couple of decades. After the Cold War ended, the sense of urgency about the nuclear missions faded. And in the post-9/11 era of wars in Iraq and Afghanistan, the Air Force focused on shorter-range tactical aircraft that could provide close-air support for ground troops.

Without a robust replacement program for today's aging B-52s, the long-range bomber force could face a manpower crisis, some experts say.

"We are now approaching levels where you have to question whether the remaining force is going to offer a viable career field for young men and women entering the military and contemplating careers as bombers," said Mark Gunzinger, a retired Air Force pilot who is now a defense expert at the Center for Strategic and Budgetary Assessments, a think tank in Washington.

"If you are a brand new second lieutenant and you're contemplating where you might bid for a career coming out of pilot training, do you want to go into career field that has one wing commander? Compared to the intelligence field or unmanned aircraft and other fields where there is clearly more slots, more opportunities to progress up the leadership ladder?" Gunzinger said in a recent interview.

The Air Force's has 159 aircraft in its long-range bomber fleet, including a total of 20 B-2s and 63 B-1s that are on average 28 years old and are slated to remain in the fleet into the 2040s, according to the CRS.

"We have to have a career field that can attract the brilliant, young talent that we need to maintain a safe and secure for into the future," Gunzinger said.

http://www.airforcetimes.com/story/military/pentagon/2015/01/13/hagel-backs-air-force-plans-for-long-range-strike-bomber/21713815/
Posted in these groups:

CPT Zachary Brooks
Posted >1 y ago
I have been discussing with a coworker of mine civilian side (retired MAJ in the Air Force) who feels that the Air Force is struggling to have a continuing mission as time goes on. He argues that many of the missions that are conducted by the Air Force could be conducted by other services branches and from a less expensive perspective (WOs instead of Os).

I do not know enough about the Air Force mission to make that comment, but the limitation of air missions might hinder their growth and duration over time.
(0)
Comment
(0)
Read This Next
RallyPoint Home