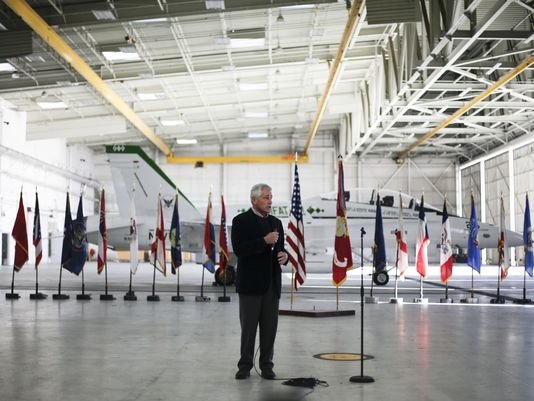 That has been the drumbeat for months, and Hagel said he expects it to come to a head as a top political issue in the next few weeks when a commission impaneled by Congress releases the results of a massive two-year study.

"I think this will be as big an issue ... over the next year as there is, and it should be, because when you are talking about that entire compensation package for all of you and your families, I mean that is key," Hagel told several hundred sailors during a visit aboard the amphibious assault ship America, just off the coast of San Diego.

"I think this year will be the beginning with those commission recommendations of where we start moving forward on making some of these calls," Hagel said after a sailor asked him directly about the future of military retirement.

Hagel was referring to the Military Compensation and Retirement Modernization Commission, which Congress created in 2013 to study potential changes to military pay and benefits and make detailed recommendations for Capitol Hill to consider.

The commission's report is complete and will be released publicly by Feb. 1. It is likely to recommend significant changes to the 20-year cliff-vesting retirement pension that the military has offered for generations. Additional proposed changes to other aspects of military compensation also may be coming.

Hagel stressed the importance of grandfathering today's service members under the existing retirement system, which has been a key tenet of the commission's study: Only future troops would be forced to accept a new retirement system.

"This country cannot afford you all, each of you, being worried about your future retirement, your future benefits, your future pay," Hagel said. "We want you focused on your job."

Hagel is making a three-day trip across the country to speak directly with soldiers, sailors, airmen and Marines. After announcing his resignation in December, he is expected to leave office in February and said he wanted to make some final visits to thank the troops for their service.

Military compensation has became a high-profile target for cuts since Pentagon budgets stopped their steady wartime rise in 2010. These days, the overall defense budget is essentially flat, and the top brass says if per-troop personnel costs continue to grow, that could crowd out funding for weapons modernization and high-tech research.

"We cannot sustain the current trajectory that we are on with the current system we have," Hagel said. "We have opportunity here to make some shifts, some reforms, early on over a period of time, which assures that no one gets hurt on this. And the longer we defer it and not make these decisions on how do we come to grips with these realities, the more difficult it's going to be and in particular the more costly it's going to be, I think, for the men and women in uniform.

Scaling back troops' pay and benefits will be a careful balancing act, he said, because the military will need to offer a compensation package that is generous enough to continue to draw an educated and high-quality force.

"In the end, as advanced as our technologies are, as good as they will become, even better, without quality people, it won't matter. ... We are going to continue to keep and must prioritize a cycle of bringing good people, the best people, into this business."

He said the military health care system is also under review, with Pentagon officials asking many fundamental — and, Hagel added, "appropriate" — questions about its future as well.

"Should we have the system we have now? ... How better can we serve the men and women and the families who serve this country? Is there a cheaper way? A smarter way?" he said.

http://www.marinecorpstimes.com/story/military/benefits/2015/01/15/hagel-compensation-change/21782607/
Posted in these groups:

CPT David Bernheim
Posted >1 y ago
"Should we have the system we have now? ... How better can we serve the men and women and the families who serve this country? Is there a cheaper way? A smarter way?"

Point well-taken. We must ratchet pressure on Congress to review and revise their own "total compensation package".
(14)
Comment
(0)

SSgt Nicole Biscoe
>1 y
Very true CPT Bernheim! I find it interesting that every time they speak of cuts, they immediately go to the service member for it. How about members of Congress take a look at their own luxurious retirement packages instead! They're going to keep cutting and keep cutting until they eventually shoot themselves in the foot one day. Defense is not something you want to cut corners on.
(1)
Reply
(0)

SCPO Lawrence Burns
>1 y
It is no secret that Congress has always taken care of themselves. The elaborate benefits and retirement packages the members of Congress craft for themselves are extravagant when compared to anything that “joe citizen” has access to. What is less publicized, however, is that members of Congress have drawn from the Social Security Fund for years, but until recent years never contributed to the program through deductions from their salaries. Congress also seems to find adequate funding through the budget each year, despite government shut downs and furloughs, to provide themselves raises when service members and other government employees don’t receive them. And if they do receive a raise, there is significant disparity between what Congress allots for themselves and “the others”.

My wife, a civil servant in the health care realm, just received her first raise in five years. It was a one percent increase. However, her taxes were raised as well. She now brings home less, with the raise, than she was bringing home prior to it. I bet nobody in Congress had that happen to them!

CW5 (Join to see)
Posted >1 y ago
I would say, Brace yourselves, retirees ... I'm afraid TRICARE is about to sky-rocket.

I'm glad to hear the SECDEF say that these changes will be grandfathered for active duty personnel. That seems only fair.
(13)
Comment
(0)

Lt Col (Join to see)
>1 y
Of course he says that...I'm sure they said the same thing for the retirees while they were on active duty.
(6)
Reply
(0)

SMSgt Ottis West
>1 y
I'm really not trying to be doom and gloom but if the changes that are being rumored go into affect our military will be depleted from a personnel standpoint. Furthermore, pay and compensation will tank and the little to nothing pay raises that we have received over the past few years will be swallowed up with out of pocket cost for just about everything namely healthcare. Housing, education and retirement are all going to get sliced or at least will have a zero growth policy attached to it. Hope I'm wrong.
(4)
Reply
(0)

SFC Dan Sorrow, M.S.
>1 y
I saw this coming a few years ago. I'm retired with Tricare (I used a Tricare Extra), but a few years ago it became a little less than layaway program for medical care. Hardly covered anything but simply served to delayed the payments. My wife and I bit the bullet and now have Blue Cross Blue Shield as primary and Tricare as secondary. Can't afford for something bad to happen and then have to depend on Tricare.
(0)
Reply
(0)

SMSgt (Join to see)
Posted >1 y ago
Last I checked (2012ish) the budget for retirement and medical care for the DoD was $51B. That is a lot of money and a very easy target to cut because after all we are only 1% of the population so even if all of us together try to get through to our representatives we are still only a small part of the population. A chunk of that $51B could go towards a lot of other programs.

For those that don't know your tri-care benefits are also on the chopping block, expect to see co-pays and the like soon. Retirement is just one piece of the puzzle.

I will use this opportunity to beat a drum, if you are not part of a professional organization like the Air Force Sergeant's Association (AFSA), then you need to be if you would like to keep your benefits. AFSA for instance has 4 lobbyist that do nothing but work to keep and enhance our benefits. The most recent big win was getting Tuition Assistance turned back on. Starting this year AFSA is offering a 5 year cyber membership for $25, that is a lot of protection for not much money.

SMSgt (Join to see)
>1 y
SPC Scott Mayhew actually AFSA is currently conducting a survey through all it's membership to align our legislative platform up with what the bulk of membership finds most important. That way we can focus efforts to the biggest impacting items.
(2)
Reply
(0)

SFC Dan Sorrow, M.S.
>1 y
That's true SGMsgt, but the 1% of us have family and friends who can throw fits like we can't. Only reason I use Facebook and Twitter. I like to keep everyone updated. Most people know we are their only real defense.
(2)
Reply
(0)

SCPO Lawrence Burns
>1 y
One thought that hits home for me is that we, the one-percenters who signed up to support and defend, should be entitled to a little more than your average citizen. We’ve missed out on a LOT of things most people take for granted: family holidays, graduations, birthdays, watching your children grow up, etc…

Since service members served for a specified length, some (like me) who served for half their lives (24 years), I believe we should receive these “promised” benefits with no questions asked. If it was mandated that everyone had to serve, like in Israel, then that would be a different story.

People in today’s society seem to believe they are privileged, that society owes them something. I think the type of people who oppose these benefits we earned should just say “Thank you” and move on.

This thought stems from one of my favorite movie quotes from A Few Good Men:

“I have neither the time nor the inclination to explain myself to a man who rises and sleeps under the blanket of the very freedom that I provide, and then questions the manner in which I provide it! I would rather you just said "thank you", and went on your way. Otherwise, I suggest you pick up a weapon, and stand a post. Either way, I don't give a damn what you think you are entitled to!”