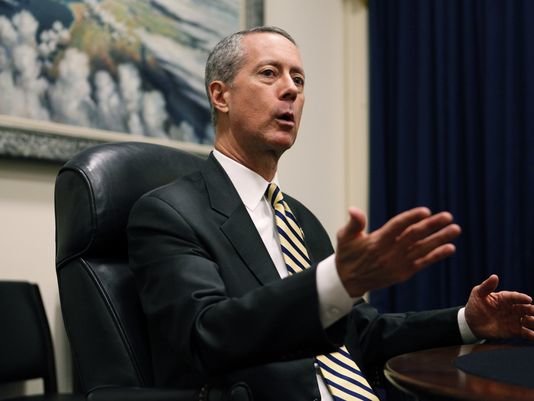 House lawmakers will back a dramatic overhaul to the military retirement system as part of the fiscal 2016 defense authorization bill, including a 401k-style investment plan and an end to the 20-year, all-or-nothing retirement model.

Plans call for the new retirement system to be in place by October 2017. They come despite concerns of some veterans groups that the commission recommendations won't entice enough troops to stay to or past the 20-year mark.

Those moves are all aspects of recommendations made earlier this year by the Military Compensation and Retirement Modernization Commission.

But for now, the lawmakers are not backing potential Tricare and commissary system changes, two other controversial measures in the commission report.

Rep. Mac Thornberry, R-Texas, chairman of the House Armed Services Committee, said he believes the moves as a whole will strengthen the fighting force.

"This is the sort of change that isn't going to save a lot of money, but it's designed to attract and keep up the quality of talent in the military," he said.

He also indicated there is support for similar moves in the Senate, which will have to sign off on all of the proposed House changes.

The retirement changes would affect only future enlisting troops. Those currently serving would have the choice to opt into the system, but would not be required to do so.

The 20-year retirement plan has served as a major military recruiting tool for decades, offering service members a sizable pension while still in the prime of their working years.

But critics have noted that few troops are able to take advantage of the system. Commission members noted that 83 percent of troops don't stay for 20 years, and leave the service with no real retirement plan.

The new proposal would solve that, offering a 401k-style investment account with government contributions and matches that troops could take with them whenever they leave the military.

Plans call for an automatic federal contribution of 1 percent of troops' basic pay to their Thrift Savings Plan accounts, with matching contributions up to 5 percent of basic pay — offerings that mirror private sector employee benefits.

The new retirement system also would offer lump-sum "continuation pay" for members who stay beyond 12 years of service and the traditional pension plan for those who reach 20 years.

However, payouts at the 20-year mark would be reduced from the current 50 percent of basic pay to 40 percent, which raised concerns among critics.

To counter that, Rep. Joe Heck, R-Nev., chairman of the committee's personnel panel, said lawmakers will allow government matches to TSP accounts to continue past 20 years, a wrinkle not included in the compensation commission's plan.

Lawmakers also will dump complex lump-sum retirement payout options recommended by the commission in favor of a simpler plan. But the remainder of the new retirement outline will stay.

The House lawmakers will mandate that Pentagon officials offer a path within six months to implement the new retirement plan. But they set October 2017 as a firm target to have the new system in place.

Heck and Thornberry both said they think that will give all sides enough time to work through any potential problems, and calm outside fears about unexpected downsides.

The Republican leaders also said that will give military officials enough time to put in place new financial literacy training for troops, so they better understand how the investment savings accounts will work and the risks involved.

The White House is scheduled to offer its own analysis of the commission recommendations April 30, after the full armed services committee marks up its version of the authorization bill.

Thornberry said he is confident that the rest of his congressional colleagues will see the benefits of the plan. Heck said members of his panel already have voiced strong support for a change.

"For too long, if you didn't serve 20 you left with nothing," Heck said. "This plan recognizes the service of everyone."

http://www.armytimes.com/story/military/capitol-hill/2015/04/21/house-panel-backs-major-military-retirement-overhaul/26127857/
Posted in these groups:

SSG (Join to see)
Posted 8 y ago
So when is Congress overhauling their retirement system?
(5)
Comment
(0)

PO3 Steven Sherrill
8 y
SSG (Join to see), that would be the day after they are no longer in charge of their own retirement system.
(0)
Reply
(0)

SSgt (Join to see)
Posted 8 y ago
I wish they would start first with their own retirement packages and to think R thought it was a good thing that they won the midterm elections.
(3)
Comment
(0)

SFC (Join to see)
Posted 8 y ago
Glad I am leaving the military!!
(2)
Comment
(0)
Show More Comments
Read This Next
RallyPoint Home