Is it possible to be a Aviation Warrant Officer in the Army and then switch over to the Air Force?

SPC (Join to see)
6.29K
27
22
2
2
0
If so, what rank structure in the Air Force is equivalent to the Army's warrant officer rank structure?
Posted in these groups: 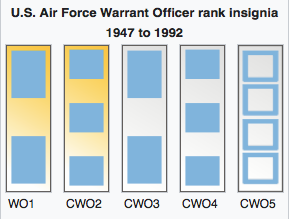 USAF has the legal authority to use the W1-W5 warrant officer rank structure, but chooses not to.

"The United States Air Force no longer uses the warrant officer grade. The USAF inherited warrant officer ranks from the Army at its inception in 1947, but their place in the Air Force structure was never made clear. When Congress authorized the creation of two new senior enlisted ranks in each of the five services in 1958 (implementing them in 1959–1960), Air Force officials privately concluded that these two new "super grades" of senior master sergeant and chief master sergeant (styling the incumbents as "superintendents" vice senior or staff NCOICs as does the USA and USMC) could fill all Air Force needs then performed at the warrant officer level. This was not publicly acknowledged until years later. The Air Force stopped appointing warrant officers in 1959.

SPC (Join to see)
>1 y
MAJ Ronnie Reams - Thank you very much. you don't know how much you helped me by breaking down the comparison in ranks between both branches.
(0)
Reply
(0)

LCDR Keith Trepanier
Posted >1 y ago
Yes it is possible. But in order to do it, you still have to meet the qualifications to be an AF pilot to transition. Meaning you have to have a bachelors degree. If you transition, you will transition from being a Warrant Officer to a Commissioned officer. Many years ago, there was an aggressive program by the Air Force trying to bring helicopter pilots over. You would do an interservice transfer, go to OTS then go to the helicopter transition course and boom you were an Air Force pilot. A couple of my friends went through the program. One is a senior officer flying the Osprey now. I went through the process as well but timing didn't work out in the end so I went and flew for the Coast Guard instead.

I'm not sure what the process would be today but I'm sure there is still a way.
(3)
Comment
(0)

SPC (Join to see)
>1 y
What if you don't have a degree when transitioning between branches but you have the expertise in that particular career field? I'm not sure if you're aware but to become a Army aviation WO a degree is not required. It's the only WO in the Army that doesn't require one.
(0)
Reply
(0)

LTC (Join to see)
>1 y
SPC (Join to see) - since the Air Force does not have Warrants and you don't have a degree, you would have to "transition" in at some enlisted rank and you couldn't be a pilot, regardless of expertise, because all Air Force pilots are officers. If your ultimate goal is to be a USAF pilot, forget going Army Aviation Warrant and get a degree and then apply to Air Force Officer Training School as a pilot.
(0)
Reply
(0)

LCDR Keith Trepanier
>1 y
SPC (Join to see) - I am 100% aware about not needing a degree as an army pilot. I was a warrant officer pilot in the Army. That was the point of my post. The people I talked about, including me, were Army Warrant Officers. I explained that you still need to meet the AF requirements to transition to be a pilot for them. If you don't have a degree, you don't meet those qualifications.

I will spell it out a little more for you. If you want to be an Air Force pilot after being an Army pilot, this is what you have to do.
1. Get accepted to Army flight training.
2. Complete Army flight training.
3. Complete your Bachelors degree while on active duty
4. Apply for AF OTS and flight training. They may still have a program where you can complete OTS and go right to a rotary wing transition without going through flight school again. But in hindsight, I think it would have been a blast going through flight school a second time.
None of the above items are guaranteed and you may strike out at any point in the process but if you want it, then go after it.
(0)
Reply
(0)

SGM Bill Frazer
Posted >1 y ago
You do know that there are a lot less WO's in the USAF right? Also I have never seen an aviation warrant in the USAF, some Maintenance /weapons types but no flyers.
(2)
Comment
(0)

MSgt Mayo Sifford
>1 y
My daughter's son-in-law served in the Army as a sergeant and is a Desert Storm combat veteran. He accepted an ETS discharge and joined the Air Force reserve and served as a C-141 flight engineer (Staff Sergeant) full time while he finished a very rapid BA degree. He then accepted a commission as a Navy pilot with the rank of Ensign. He was trained, and served about two years as a naval helicopter pilot. Upon his ETS as a Lieut JG, he joined the Army national guard in Florida and rose to the rank of Major. Not wanting to accept a promotion to Lt. Col. and command a company, which meant a severe decrease in flying time and much paperwork, he tried to swap his commission for a WO4 flying position. The Army balked so he left the full time Guard and began patroling as a chopper pilot for the DEA in Puerto Rico and, later, on our Southern border where he is employed today. He still does ANG part time duty as a chopper pilot (still a Major).
I realize this tale is way off point but I thought it sufficiently interesting to include it here.
(1)
Reply
(0)

SPC (Join to see)
>1 y
MSgt Mayo Sifford - That's definitely impressive, encouraging and motivating. If I were to ever come across him I would love to sit with him and listen to him give knowledge about his experiences. He lived his. I hope enjoy he looks back and can say he enjoyed the journey when it's all said and done.
(1)
Reply
(0)
Show More Comments
Read This Next
RallyPoint Home