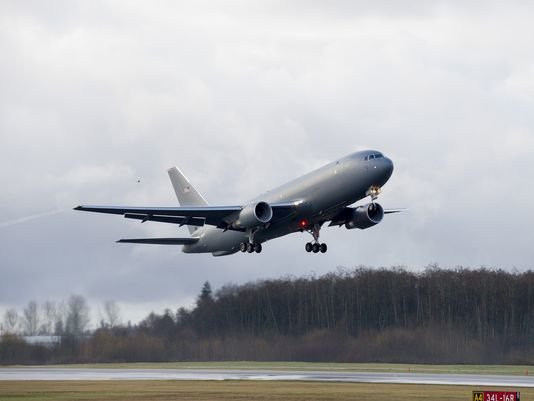 The KC-46A Pegasus tanker program hit an important milestone Sunday with the successful first flight of its engineering test plane.

The Boeing 767-2C, a test version of the KC-46A without the refueling boom and other tanker equipment, took wing at 9:29 a.m. Pacific time, landing three hours and 32 minutes later at Boeing Field just outside of Seattle.

It marks the first test flight of any kind for the KC-46A tanker program, which will produce 179 new planes to replace the aging KC-135 tanker fleet, with production ending in 2027. The tanker replacement program is a major focus for Boeing's defense arm as many of its programs wind down.

In a company statement, Boeing test pilot Ron Johnston said the 767-2C performed "flawlessly," adding that pilots took the plane up to 28,000 feet and near max speed while verifying various systems.

The same news release quoted Brig. Gen. Duke Richardson, the program executive officer for tankers, calling the flight a "really critical step in the life of this program and the development of this important capability for the warfighter."

The test flight of the 767-2C had originally been scheduled for June 2014, then for third quarter of 2014. Boeing has downplayed the delay, noting that the test flight is an internal deadline. The service has agreed, emphasizing that it is only concerned that Boeing meet its eventual requirement of delivering 18 aircraft by 2017.

The program has hit other snags as well this year, leading to Lt. Gen. Ellen Pawlikowski, military deputy for acquisition, expressing concerns in November about Boeing meeting its "near-term" schedule.

The Boeing release notes that the company plans to have the remaining three test aircraft — another 767-2C and a pair of fully-equipped KC-46A models — flying in 2015. A source told Defense News the first KC-46A flight should occur in the spring.

CMSgt (Join to see)
Posted 7 y ago
I am happily losing a bet on this one! I get some boom operators and KC-135 maintainers at Scott AFB a couple of years ago that I would be on my retirement rocking chair long before we ever got the next generation air refueling platform in the air. It is ridiculous that it has taken this long, and a huge testament to our incredible maintainers that they have kept aircraft as old as I am serviceable, and fueling the fight until we could finally reward them with a platform worthy of the best Air Force on the planet.
(2)
Comment
(0)

LCDR (Join to see)
Posted >1 y ago
Now it has deployed its boom for the first time.

The KC-46A Pegasus notched another success this week when the systems at the heart of aerial refueling were demonstrated on EMD-2 with the deployment of both drogue systems and the boom.On Thursday, EMD-2 successfully extended the drogue refueling baskets from both the Centerline Dro