Less than half of combat squadrons fully ready for combat 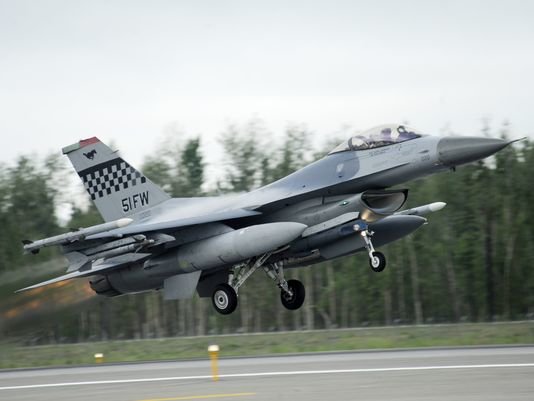 Less than half of the Air Force's combat-coded squadrons are fully prepared for combat, top service officials told lawmakers on Wednesday.

"While the specific numbers are classified, I'll tell you the overall combat capability of our combat coded squadrons in the Air Force is still below 50 percent, so fewer than 50 percent of them are fully combat capable," Chief of Staff Gen. Mark Welsh told the Senate Appropriations defense subcommittee on Wednesday.

And if Congress does not block the spending cuts called for in the Budget Control Act, the decline in squadrons that are fully combat ready will be "stunning," Welsh said.

The Air Force's proposed budget for fiscal 2016 does not include the steep Budget Control Act spending cuts, which could return next fiscal year unless Congress repeals the mandated spending caps.

"It will not be a precipitous drop off because we will prioritize funding for readiness, but we will not be able to continue the recovery of individual and unit readiness that we had started over the last two years," Welsh said.

The Air Force also faces a bigger problem because it has not invested in training ranges and other infrastructure over the last 15 years, Welsh said. It will take between eight and 10 years for the Air Force to rebuild that infrastructure, depending on how much money it gets.

The Air Force was hit hard by the Budget Control Act cuts known as sequestration, which went into effect in 2013 when Congress and the president failed to reach an agreement on how to balance taxes and spending.

Because the cuts came in the middle of the fiscal year, the Air Force had to take drastic measures to reduce spending, including slashing flying hours. Ultimately, the service had to ground 17 combat squadrons that year.

Air Force Secretary Deborah Lee James said she is concerned that roughly half of combat air forces are not sufficiently trained for "high end" combat.

"I'm talking about a conflict in which the enemy has the ability to interfere with you in the air or in space," James told reporters after Wednesday's hearing.

While the Air Force would be prepared if called on to fight a high-end war, the service has to get more squadrons fully combat ready, she said.

"I want to make sure that we are readiest that we can be and ought to be and I think we can do better in this country than what sequestration would allow for us," James said.

http://www.airforcetimes.com/story/military/2015/02/25/fewer-than-half-of-combat-squadrons-fully-ready-for-combat/23997409/
Posted in these groups:

Cpl Michael Strickler
Posted >1 y ago
It is alright everybody. The Marines will pick up the slack haha We have got Captain Steven Hiller!
(0)
Comment
(0)

SrA (Join to see)
Posted >1 y ago
This is really sad to see, I know they are actually doing a Red Flag Excersise this year but it is still not showing very well for our services if we cant even keep birds in the air
(0)
Comment
(0)

CPT (Join to see)
Posted >1 y ago
This is a trend that is happening throughout the entire military and it needs to stop. Air superiority and close air support are absolute game changers and a huge reason why our ground forces enjoy so much success. Take this capability away and airmen will not get to the fight and the Soldiers and Marines on the ground will suffer and die because of it. I know a lot of the blame probably rests with the government and the Budget Control Act, but I also think the Air Force has a responsibility to get its budget under control also. The F-35 flying albatros is years behind schedule, billions over budget, and not even performing as well as everyone expected. If we got rid of this program, how many more A-10 and F-16 squadrons could we commit to the fight? Enough to make a big difference I think.
(0)
Comment
(0)
Read This Next
RallyPoint Home