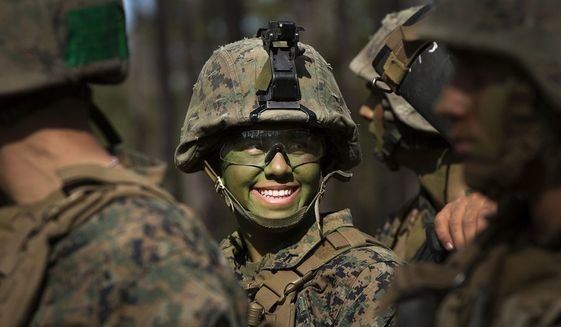 http://www.washingtontimes.com/news/2015/apr/19/marine-corps-weighs-lower-standards-for-women-afte/?page=all#pagebreak
Posted in these groups:

SSgt Dan Montague
Posted 7 y ago
There is no room for equality in certain things in the military. Physical and mental readiness is priority. People lose touch with the reality of war and what we are trained to do. When men have tried and failed in SF, jump school, sniper school and many others, the standards were not dropped for them. I am a firm believer in specific MOS pt and physical training standards for all combat arms units. If you can not perform your job, you are bringing the morale and readiness of your unit down to include endangering your fellow service members.
I have nothing against women doing combat arms now. I just don't want to see the standards drop for anyone, male or female.
Ok, I will step down off my box.
(11)
Comment
(0)

Social engineering gone awry again. Why worry about standards? Equality (as long as it is in areas they want to be equal in) is all that counts.

This was bound to happen... Just like the Army will change the standards for females to complete Ranger School.

I am all for women being able to have the same opportunities as men, as long as the standards are not lowered for females or lowered for all so females can meet them. Stick to the standards and let the chips fall where they may.
(6)
Comment
(0)

SPC Elijah J. Henry, MBA
7 y
COL Jean (John) F. B., while most would agree with your statement: "I am all for women being able to have the same opportunities as men, as long as the standards are not lowered..." I am not so quick to agree.

The military is no place for social experimentation, at least not for the sake of social experimentation. The military has a job to: warfighting. The fact that the possibility of lowering standards to accommodate women has even been considered demonstrates that these decisions are not being made to advance our ability to win wars. They are being made for the sake of political correctness, to appease liberal civilian leadership and others who have no idea about what it really takes to win a war.

Nobody -- not even a Medal of Honor recipient -- has a *right* to serve in any capacity. No one -- of any gender, race, or whatever -- should have any opportunity in the military that does not advance our ability to destroy the enemy, one way or another.

I realize your point was about maintaining standards.
(2)
Reply
(0)

I totally agree with you...

The standards I refer to are not just individual standards but collective standards of the unit, the mission, etc. If having females who may meet the physical standards for a specific position hinder the unit or the mission in any way, that, to me, is also akin to a reduction in standards and should not be allowed for "social justice" issues.
(2)
Reply
(0)
Show More Comments
Read This Next
RallyPoint Home