“There’s no news here today,” Navy Secretary Ray Mabus joked in promoting Howard to admiral. The Navy had simply “picked the best officer to be the VCNO,” or Vice Chief of Naval Operations and No. 2 officer in the Navy, Mabus said.

“Her accomplishment is a direct example of a Navy that now, more than ever, reflects the nation it serves,” Mabus said at the promotion ceremony at the Women in Military Service for America Memorial at Arlington National Cemetery.

“She is also a great example of how much we as a nation and a Navy lose if we put artificial barriers in,” Mabus said.

In her remarks, Howard said that in preparing for the promotion ceremony she was told that “four-star shoulder boards for women didn’t exist.”

The Army and the Air Force have previously promoted women to four-star rank. The first female four-star, Army Gen. Ann Dunwoody, retired in 2012.

Howard was also the first African-American woman to rise to three-star rank in the active-duty military.

The 54-year-old Howard, a 32-year Navy veteran, currently is the Deputy CNO for Operations, Plans, and Strategy. She will replace Adm. Mark Ferguson III as the 38th Vice Chief of Naval Operations (VCNO).

Howard graduated from the Naval Academy in 1982 and became the first African-American woman to command a Navy ship in 1999 when she came aboard the dock landing ship Rushmore.

In April 2009, she commanded Task Force 151, a multi-national counter-piracy effort off the Horn of Africa.

Howard helped devise a plan to rescue Phillips and dispatched the destroyer Bainbridge to assist. Navy SEAL snipers were brought aboard the Bainbridge and later opened fire on a small lifeboat carrying Phillips and three pirates, killing the pirates and freeing Phillips.

Howard later told “Power Players,” an outlet of ABC News and Yahoo News, that “we found out that the life raft was heading to the Somali coast, so very quickly the focus of the mission became — don’t let the life raft touch land.”

“We wanted to bring Capt. Phillips back safely to the U.S., but we figured out that if that life raft got ashore before we could rescue him, that would probably be the last we’d see of him,” Howard said.
Posted 8 y ago
Responses: 13

PO1 (Join to see)
Posted 8 y ago
She earned every star - probably 3 to 4 times before she was awarded each star. BZ Admiral Howard!
(6)
Comment
(0)

LCDR (Join to see)
Posted 8 y ago
Note that her command was an amphib - that's one hell of a rough CO tour. Mad props to the Admiral.
(3)
Comment
(0)
show previous comments

LCDR (Join to see)
8 y
Amphib ships are often larger than most non-carrier ships. Basically, of the combatants the Dock Landing Ship she commanded is the largest thing without a flight deck. Because of their large crews, shallow draft (distance from the waterline to the bottom), amphibious-assualt mission, and the presence of those green people, commanding an LSD (yes, unfortunate hull designation) can be one of the greatest challenges in the surface fleet.
(4)
Reply
(0) 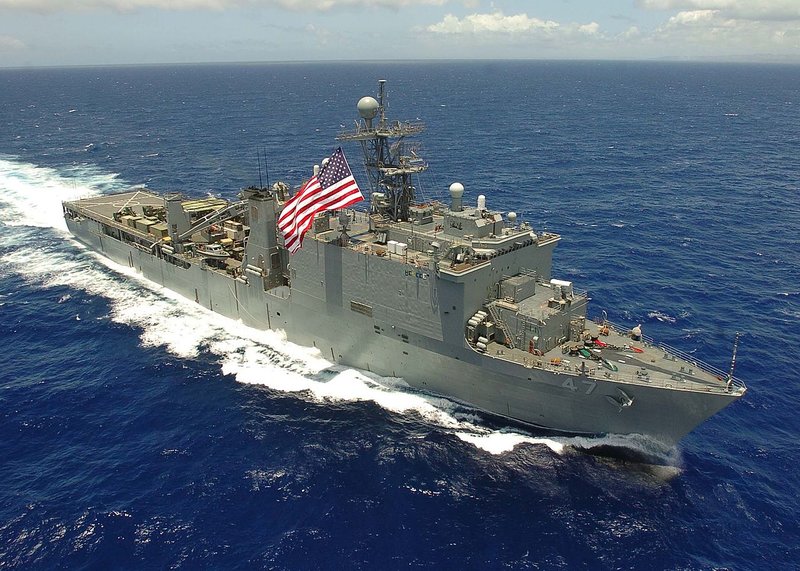 USS RUSHMORE is the 7th of 8 ships in the WHIDBEY ISLAND Class. This ship’s mission is to embark Marines with their combat
equipment and vehicles, then remain at sea as an on-call force to conduct a diverse range of amphibious operations such as:
training with international partners, providing humanitarian assistance or disaster relief, executing noncombatant evacuation,
and assaulting a hostile shore. In times of both war and peace, these missions are highly relevant to the
U.S. Navy and Marine Corps Cooperative Maritime Strategy.

RUSHMORE is designed primarily to embark and operate Landing Craft Air Cushion (LCAC) assault hovercraft, which are able up to
carry a 60-ton payload and travel at speeds in excess of 40 knots. Using this versatile craft, RUSHMORE can conduct
amphibious operations across a wider range of the world’s beaches and at much greater distances than previous
generations of amphibious ships and conventional landing craft.

Officially designated a Landing Ship Dock (LSD), RUSHMORE accomplishes her mission through the use of a well deck and ballasting system to enable the loading, launching and recovery of landing craft. After departing the ship, assault craft are directed to shore by the ship’s Combat Information Center (CIC). The ship has robust command, control, and communications equipment. It carries electronic warfare suite and surface-to-air missile launchers to protect from anti-ship cruise missile attack. It also carries a variety of machine guns for self-defense against surface threats. Using its own small boats and Visit, Board, Search, and Seizure (VBSS) teams, RUSHMORE can also conduct Maritime Security Operations, such as anti-piracy and maritime surveillance.

The ship has a crew of approximately 300 and is organized into six departments: Operations, Deck, Engineering, Supply, Medical, and Executive.
(2)
Reply
(0) 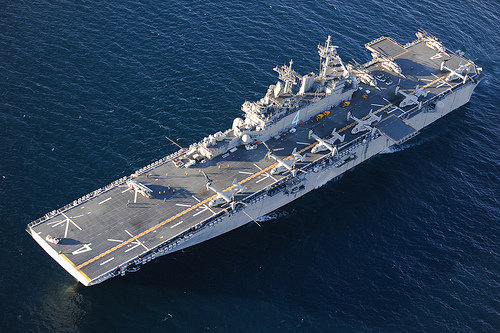 Description
The largest of all amphibious warfare ships; resembles a small aircraft carrier; capable of Vertical/Short Take-Off and Landing (V/STOL), Short Take-Off Vertical Landing (STOVL), Vertical Take-Off and Landing (VTOL) tilt-rotor and Rotary Wing (RW) aircraft operations; contains a well deck to support use of Landing Craft, Air Cushioned (LCAC) and other watercraft (with exception of the first two LHA(R) class ships, LHA 6 and LHA 7, which have no well deck).

Features
Modern U.S. Navy Amphibious Assault Ships project power and maintain presence by serving as the cornerstone of the Amphibious Readiness Group (ARG) / Expeditionary Strike Group (ESG). A key element of the Seapower 21 pillars of Sea Strike and Sea Basing, these ships transport and land elements of the Marine Expeditionary Unit (MEU) or Marine Expeditionary Brigade (MEB) with a combination of aircraft and landing craft.

The Wasp-class LHDs provide the Marine Corps with a means of ship-to-shore movement by helicopter in addition to movement by landing craft. LHDs have been participants in major humanitarian-assistance, occupation and combat operations in which the United States has been involved. Such operations have included participating as launch platforms for Marine Corps expeditionary forces into Afghanistan during Operation Enduring Freedom in 2001 and 2002, Iraq in Operation Iraqi Freedom in 2003 and humanitarian support after the catastrophic Tsunami in 2004. During Operation Iraqi Freedom, two LHDs served as “Harrier carriers,” launching an air group of AV-8B attack aircraft against targets inside Iraq. In 2004, LHDs were used to transport thousands of Marines and their equipment to Iraq and Afghanistan for combat operations. Most recently, critical post Hurricane Katrina support was provided in New Orleans by LHD 7 (Iwo Jima) where thousands of police, fire and rescue personnel were hosted onboard during recovery operations and IWO JIMA operated as the central command and control hub. With delivery of Iwo Jima in 2001, the Navy and Marine Corps reached a desired force level of amphibious warfare ships — LHAs/LHDs, LPDs and LSD 41/49s — that provide fully capable Expeditionary Strike Groups to fulfill anticipated forward-presence and expeditionary requirements. The eighth LHD, Makin Island (LHD 8), was delivered to the Navy in April 2009, and commissioned in October 2009. LHD 8 differs from earlier ships of the class in that it is powered by gas turbine engines rather than steam turbines. LHD 8 is the first U.S. Navy amphibious assault ship to replace steam boilers with gas turbines, and the first Navy surface ship to be equipped with both gas turbines and an Auxiliary Propulsion System (APS). This unique auxiliary propulsion system is designed with fuel efficiency in mind. The APS uses two induction-type Auxiliary Propulsion Motors (APM) powered from the ship’s electrical grid instead of using main propulsion engines to power the ship’s shaft. Instead of using its gas turbines which are less efficient at lower speeds, the ship will be able to use its APS for roughly 75 percent of the time the ship is underway. Over the course of Makin Island’s lifecycle, the Navy expects to see a savings of more than $250 million. Because the gas turbines will be used infrequently, the Navy will also save on maintenance and lifecycle costs. The entire propulsion and electric system is controlled by a comprehensive machinery control system that also controls and monitors damage control, ballasting and de-ballasting, fuel fill and auxiliary machinery. The machinery control system allows the ship to switch from gas turbine to electric propulsion on the fly. It is fully distributed, accessible from multiple locations, and every console provides full system control and monitoring capabilities of the entire engineering plant.

Background
Amphibious warships are designed to support the Marine Corps tenets of Operational Maneuver From the Sea (OMFTS) and Ship to Objective Maneuver (STOM). They must be able to sail in harm’s way and provide a rapid buildup of combat power ashore in the face of opposition. Because of their inherent capabilities, these ships have been and will continue to be called upon to also support humanitarian and other contingency missions on short notice. The United States maintains the largest and most capable amphibious force in the world. The Wasp-class LHDs are currently the largest amphibious ships in the world. The lead ship, USS Wasp (LHD 1) was commissioned in July 1989 in Norfolk, Va.

PO1 (Join to see)
8 y
After reading this I think I deserve ESWS pin!
(0)
Reply
(0)
Show More Comments
Read This Next
RallyPoint Home