Only Three of 116 Guantanamo Detainees Were Captured By US Forces 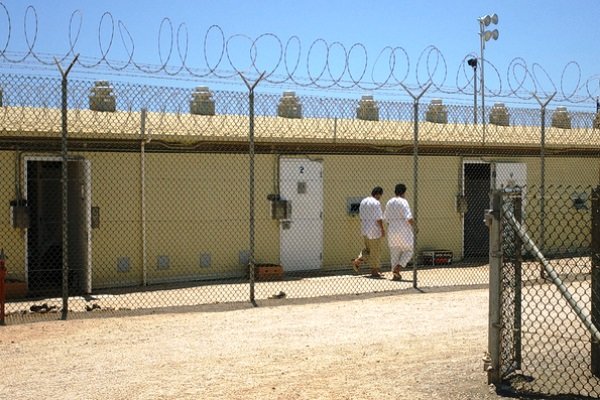 Only three of the 116 men still detained at Guantánamo Bay were apprehended by US forces, a Guardian review of military documents has uncovered.

The foundations of the guilt of the remaining 113, whom US politicians often refer to as the "worst of the worst" terrorists, involves a degree of faith in the Pakistani and Afghan spies, warlords and security services who initially captured 98 of the remaining Guantánamo population.

According to an analysis of long-neglected US military capture information, 68 of the residual Guantánamo detainees were captured by Pakistani security forces or apparent informants. Another 30 were sent to the notorious wartime facility by forces from Afghanistan -- mostly warlords and affiliates of early US efforts to topple the Taliban after 9/11.

No US official nor human rights critic believes all 116 detainees are innocent of all terrorism charges. Yet the reality that nearly 85% of detentions at Guantánamo stem from foreign partners with their own interests in round-ups -- overwhelmingly of Arab men in south Asian countries -- rarely factors into the heated rhetoric from conservative politicians who warn of dire consequences should Barack Obama finally close the facility.

Senator Kelly Ayotte said in March that "most of the remaining Guantánamo detainees are the worst of the worst terrorists", in a typical sentiment echoed this week by her Republican colleagues.

Knowledgable US officials, including former Guantánamo prosecutors, consider that assessment overblown, particularly for the 52 men approved in 2010 by a multi-agency US assessment for transfer out of the facility. Those detainees they consider actually worrisome at Guantánamo are "low-level fighters in minor operational roles", said one official who insisted on anonymity, calling them "Pfc al-Qaida at best" to indicate their low rank.

At least 17 of the Pakistan-led captures are explicitly listed in 2008-era military documents as coming from Pakistan's Inter-Services Intelligence, which incubated and sponsored the Afghan Taliban and is rumoured to have helped shelter or turned a blind eye to Osama bin Laden's years of hiding in Abbottabad.

Ayotte, a leading opponent of Obama's plan to close Guantánamo, has questioned Pakistan's trustworthiness in the past, asking after the 2011 Bin Laden raid if the Pakistanis were "incompetent or were they, obviously, aware of the compound and not providing us that information".

After Pakistan, forces from Afghanistan provided the largest cohort of Guantánamo's current population, according to the Guardian's review.
At least seven of the 30 men proffered by the Afghans came from forces loyal to Abdul Rashid Dostum, who is accused of stuffing hundreds of prisoners into shipping containers, suffocating them to death. Dostum is now vice-president of the US-backed Afghan government.

Over 60 of the detainees captured by Afghans and Pakistanis are said in the documents to have spent some time in the Tora Bora region of Afghanistan where an inconclusive battle between US and al-Qaida forces occurred in December 2001. A 2009 US Senate report validated longstanding accounts that US special forces paid locals for their aid, something human-rights critics have said gave an incentive for Pashtuns to capture people and claim al-Qaida affiliation to credulous Americans.

"There is great reason to disbelieve claims that detainees at Guantánamo are the ‘worst of the worst', including the fact that many were sold to the US for a bounty, not based on any real quality intelligence the US had gathered," said Laura Pitter of Human Rights Watch.

The three remaining Guantánamo detainees caught by US forces are Pakistani Saifullah Paracha and Afghans Abdul Zahir and Obaidullah.

Other countries that provided detainees to the US who are currently held at Guantánamo include Georgia, Turkey, Mauritania, the United Arab Emirates, Egypt, Thailand, Somalia and Kenya. Even Iran, the US's major adversary in the Middle East, arrested a Yemeni man, Tawfiq Nassar al-Bihani, who ended up at Guantánamo via Afghanistan.

Numerous US officials over the years have stated that America's understanding of the membership networks of al-Qaida and the Taliban were limited during the first few years after 9/11, the period when the vast majority of remaining Guantánamo detainees were captured. Regional allies with experience fighting extremist Islamism, including Libya's Muammar Gaddafi, Syria's Bashar al-Assad and Pakistan's Pervez, became increasingly important, even as those dictators pursued their own agendas.

But some of the foreign captures were more collaborative than the documents portray.

Robert Grenier, the CIA station chief in Pakistan around the time of the Tora Bora battle, said that the Pakistanis would round up and detain mostly Arab terror suspects on the basis of US-provided information.

"For the most part, these were not people who were known specifically and by name," said Grenier, who went on to helm the CIA's Counterterrorist Center. Grenier cited three high-profile exceptions: prominent al-Qaida members Abu Zubaydah, Khalid Sheikh Mohammed and Ramzi bin al-Shibh. All are currently detained at Guantánamo Bay after years in brutal CIA incommunicado detention.

Still, officials at Guantánamo knew practically nothing about the men they detained.

Retired Army Colonel Stuart Herrington, a renowned former military interrogator, travelled to Guantánamo in March 2002 to review intelligence operations shortly after the detention facility opened. He recalled to the Guardian in February that US interrogators lacked even basic information about most of their new charges: "Of the 300 [initial detainees], they were sure they had the correct identification, name and biometric data of about 30% of them."
Retired Air Force colonel Morris Davis arrived at Guantánamo Bay in September 2005 as the chief military commissions prosecutor believing that the facility really did house the worst of the worst. By the time he resigned in 2007, he came to believe the designation was misapplied from the start.

"It didn't take long to realize that for every detainee that was arguably a KSM-type [Khalid Shaikh Mohammed] there were dozens and dozens more that were of the knucklehead variety like David Hicks or the low-level dupe variety like Salim Hamdan," Davis told the Guardian.

Though nominal US allies over the 14 years since the 9/11 attacks, both Pakistan and Afghanistan have frequently vexed US policymakers, intelligence officers and troops.

In addition to Pakistan's incubation of the Taliban, a US investigation in 2012 found that Pakistani forces opened fire on US troops and shut down Nato's ground shipping routes to resupply the Afghanistan war. But, Grenier said, "none of these complications apply to foreign fighters affiliated with al-Qaida" -- an issue on which he considered US and Pakistani interests aligned.

Afghan soldiers launched deadly "green on blue" attacks, wounding and killing their US mentors. Their former US-financed president, Hamid Karzai, would frequently denounce US conduct in Afghanistan and refused to sign a long-term basing deal with the Americans that his successor endorsed.

Obama's plan to hold a rump of non-transferrable Guantánamo detainees indefinitely at military or federal jails in the US is arousing increased anger in the weeks leading up to a formal unveiling. But the prominent politicians rejecting the plan rarely address the initial Pakistani and Afghan apprehensions that provide the underpinning for most remaining Guantánamo detentions.

"Transferring these prisoners to the mainland puts the well-being of states in danger, posing security risks to the public and wasting taxpayer dollars," the senators wrote.

"Gitmo terrorists are worst of the worst," Scott wrote to his Twitter followers on Sunday, "and should stay at Guantánamo."

1stSgt (Join to see)
Posted >1 y ago
What difference does it make who captured them. They are terrorists. I really don't care what happens to themm
(2)
Comment
(0)

SFC Osvaldo Vazquez
Posted >1 y ago
I was there in 06. Wasn't there some executive action signed that supposed to close the place a while ago? Like when President Obama went in office?...

SFC (Join to see)
Posted >1 y ago
Keep thinking that. These guys are terrorists, how do I know? Check my profile.
(0)
Comment
(0)
Show More Comments
Read This Next
RallyPoint Home