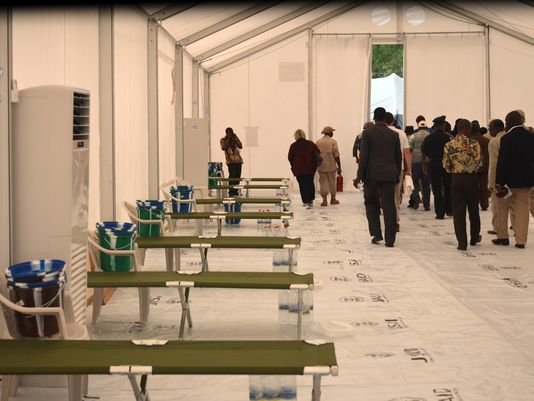 The first wave of troops returning to the U.S. from deployment to West Africa arrived Thursday and have begun their 21-day quarantine at Joint Base Langley-Eustis, Virginia, Pentagon officials said.

More than 80 troops, including 51 airmen, 27 sailors, four Marines and two soldiers, were to be screened for symptoms and transported to their quarters for the next three weeks — buildings in a remote area near the base's flight line that contain berthing areas, a dining facility, gym, computers, telephones and other equipment, said Pentagon spokesman Rear Adm. John Kirby.

The troops will be screened twice a day for symptoms of Ebola, Kirby added.

He said Defense Secretary Chuck Hagel "is both proud and grateful for the service rendered by these men and women in the critically important mission of trying to stop the spread of Ebola at its source."

The troops have left a region that appears to be gaining an upper hand over the deadly disease, although the threat remains serious, said Army Maj. Gen. Gary Volesky, 101st Airborne Division commander, and U.S. Ambassador to Liberia Deborah Malac in a press conference via Skype with reporters on Thursday.

The Pentagon has decreased its estimate of the number of troops needed to support Operation United Assistance, from 4,000 to 3,000 service members, and is slated to build just 12 of 17 planned Ebola treatment facilities, according to defense officials.

Volesky attributed the reductions to initial low estimates of resources already in place in Liberia and the fact that U.S. Agency for International Development personnel have made more progress in the response than expected.

But Malac said the mission remains critical. "The numbers of cases continue to increase. We are not out of the woods by any stretch of the imagination. Clearly, the rate of increase is much lower than it has been over the last couple of months. But we need to continue with the plan," she said.

About 2,200 U.S. service members are now in Liberia and Senegal participating in Operation United Assistance, according to Volesky.

Those troops have established a port operations and logistics center in Dakar, Senegal, built a hospital to treat health care workers in Monrovia and stood up a joint Ebola treatment facility, with "three or four" more to come in the next few weeks, Volesky said.

But the number of planned Ebola treatment facilities to be built now stands at 12, Assistant Secretary of Defense for Special Operations and Low-Intensity Conflict Michael Lumpkin told members of Congress on Wednesday.

Defense Department officials said the reduction reflects a request from USAID and the Liberian government but is subject to change if more are needed.

"We've always stated that DoD is prepared to build 'up to' 17," one official said.

While the rate of infection has declined in Liberia, neighboring Sierra Leone has seen a sharp increase, according to the World Health Organization.

The death toll stands at 5,147 cases, with 14,068 people infected in Sierra Leone, Guinea and Liberia.

Defense officials have said the deployment to West Africa for Operation United Assistance could last more than six months.

On Thursday, Lumpkin defended Hagel's decision to quarantine all U.S. service members returning from the mission before the Senate Appropriations Committee.

The move is far more restrictive than Centers for Disease Control and Prevention recommendations for travelers from West Africa and health care workers who treated Ebola patients. But Lumpkin called it prudent, given the "scope and scale" of the mission.

"We have the youngest and largest population of personnel deploying to this crisis," Marine Corps Maj. Gen. James Lariviere told members of the Senate Appropriations Committee on Thursday. "We decided to take this conservative approach. It's not that we know something everyone else does not."

Service members returning from West Africa will be sequestered at one of five bases in the U.S.: Fort Hood or Fort Bliss in Texas; Fort Bragg, North Carolina; Joint Base Lewis-McChord, Washington; or Joint Base Langley-Eustis.

http://www.marinecorpstimes.com/story/military/pentagon/2014/11/12/military-deployment-west-africa-ebola/18927905/
Posted in these groups: Pentagon

SSG V. Michelle Woods
Posted 8 y ago
Great! Now can someone get me the hell outta Liberia???

Bottom line up front: Liberians really are doing what they can to help stop this from spreading. They have signs up everywhere informing people of where to go if they feel sick, signs and symptoms, as well as proper measures for decreasing the spread of Ebola.

They also have guards at many of the major shopping centers who require everyone to get their temperature checked before entering the building and rinse their hands with bleach water. Unlike other countries we've "helped", many Liberians are extremely grateful for our presence.
(12)
Comment
(0)
show previous comments

SFC (Join to see)
8 y
SFC Mark Merino I deployed in March, on a mission unrelated to Ebola, as it had not yet blown up into the huge epidemic that evolved.
(1)
Reply
(0)

SSG Peter Muse
8 y
SSG Woods,
thanks for that short and sweet testimonial on what's happening on the ground. It's always important to let Americans know when the people we are helping show they are thankful. It gives power to the mission!
(2)
Reply
(0) 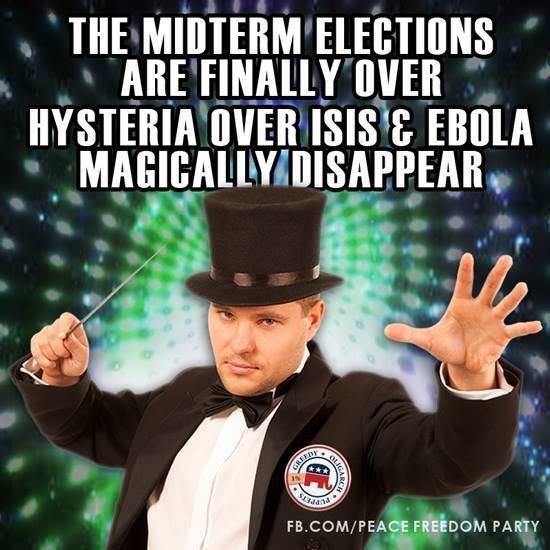 SFC (Join to see)
8 y
Ive always loved how the news all plays the game of misdirection when it suits them. Ive told fellow employees at my job that if a scandal just seems to disappear due to some critical disease or civil unrest than they need to pay attention more to whats going on.
(1)
Reply
(0)

TSgt (Join to see)
8 y
I was just thinking that today listening to the news on the way to work. Suddenly no mention of ebola.
(1)
Reply
(0) 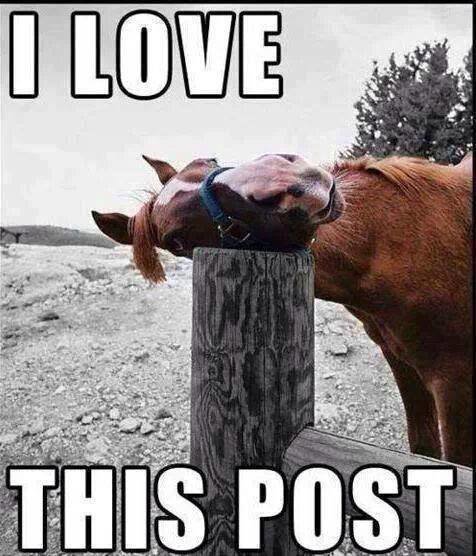 SFC (Join to see)
Posted 8 y ago
When it was announced that troops were mobilizing to come here to help us sort out this mess, I was puzzled at all the outrage and downright panic being displayed by some. I was here in Liberia before the epidemic really took off and as the threat increased, so did our protective measures. Some of the protective measures are even a bit overboard, but hey, better safe than sorry. Either way, I stated before and stand by my position that sending troops here is a good thing, provided they are the right mixture of MOS, and that Ebola cases would be minimal, if any due to protective measures. While Liberia, and West Africa as a whole, is not out of the woods yet there has been progress made. There may be spikes in case numbers still to come but the Ebola Treatment Units being built will hopefully match capacity with need. Thankfully no Ebola infections to date with US service members, and as long as everyone follows directions it should stay that way.
(6)
Comment
(0)
Show More Comments
Read This Next
RallyPoint Home