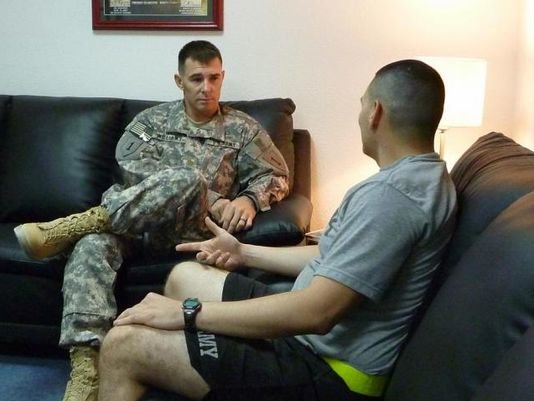 A Rand Corp. survey of 522 psychiatrists, psychologists and licensed clinical social workers found that just 13 percent met the study's criteria for "cultural competency," meaning they understood military mores, language and background, and delivered appropriate care for illnesses unique to the military, such as combat-related post-traumatic stress disorder and depression.

The results are important, Rand researcher Terri Tanielian said, because insensitivity and unfamiliarity with proven treatments may keep troops and veterans from getting quality psychiatric care.

"These findings suggest that when service members, veterans or family members seek care from providers not affiliated with the Defense Department or Veterans Affairs, they may encounter providers who are not as well prepared to deliver culturally sensitive care," Tanielian and the other authors wrote.

DoD and VA have broadened their mental health services in the past five years, with VA hiring more 3,300 mental health providers, peer specialists and apprentices since 2011.

But former troops, as well as active-duty service members and their families, often prefer to seek care outside the military and veterans health system for convenience, privacy and other reasons.

But the study found that many civilian providers are ill-equipped to handle the military community's needs.

According to the results, 70 percent of the civilians surveyed who work at a military or VA treatment center had a high degree of military cultural competency, but just a quarter of providers who are registered Tricare providers scored well.

Among those who are not working directly with troops, veterans or family members, just 8 percent scored well for cultural competency.

Neck injections a viable treatment for PTSD, researchers say
In terms of familiarity with proven treatments for PTSD and combat-related mental health issues, licensed counselors scored the highest, with roughly half reporting they had been instructed on evidence-based practices.

Another VA-funded initiative — the National Vietnam Veterans Longitudinal Study — estimated the prevalence of PTSD in combat Vietnam veterans at slightly more than 11 percent, even 40 years after the war.

At a Senate Veterans' Affairs Committee hearing Wednesday, lawmakers said they were alarmed by the report, given that Congress passed a law in August expanding access to non-VA providers for veterans who live more than 40 miles from a VA facility.

"I am very concerned about whether VA and local communities are prepared with the resources, policies and training to help veterans in serious crisis," said Sen. Patty Murray, D-Wash. "While our men and women in uniform have the courage to come forward and ask for help, VA must be there with not only high-quality and timely care but also the right type of care."

Josh Kassel, an intern for Rep. Gwen Moore, D-Wis., spoke at a press conference on the Rand study and said DoD and VA must do more to help civilian providers understand and treat their active-duty and former military patients.

Kassel said three students from his high school class school in Burlington, Wis., died by suicide after returning home from serving in the military, even though all had sought mental health treatment.

"It wasn't like I was in a super-rural town. We definitely had the resources available to help. But what is being and can be done from the Defense Department to reach out to people like my classmates and figure out what help they need and where they can get it?" Kassel asked.

A nationwide rollout of the course is underway, according to a Center for Deployment Health official, and health care providers can earn continuing education credits by taking it.

Telemedicine — counseling and therapy provided to patients via a computer link or telephone — also appears to hold promise for veterans in rural areas, according to research published Wednesday in JAMA Psychiatry.

A study of 265 veterans with PTSD found that 55 percent who were engaged with their providers via telemedicine received cognitive processing therapy, an evidence-based treatment for PTSD, compared to 12 percent of patients engaged in "usual care."

The results also showed that those in the Telemedicine Outreach for PTSD group had larger declines in scores on PTS diagnostic tests.

"This trial introduces a promising model for managing PTSD in a treatment-resistant population. Findings suggest that telemedicine-based collaborative care can successfully engage this population in evidence-based psychotherapy for PTSD," wrote John Fortney, a researcher with the University of Washington, and others.

http://www.marinecorpstimes.com/story/military/benefits/health-care/2014/11/21/mental-health-troops-veterans-care/19324407/
Posted in these groups:

MSgt Rob Weston
Posted 7 y ago
This is the main reason I have dedicated to becoming a Mental Health Counselor after I retired from the Military. I'll specialize in vets, PTSD, military families, and military personnel. It takes someone who has lived the life to understand and connect with vets. A vet taking care of vets.
(15)
Comment
(0)

1SG Cameron M. Wesson
7 y
Amen Brother! Not sure I could due to some "excess baggage" I carry... but we really need pro's like you! I became a Master Resiliency Trainers... and that is how I help support.
(0)
Reply
(0)

When I was looking at being medically retired soooo close to retirement I was desperate to talk to someone in my situation. I NEEDED to hear that everything would work out and x,y,z, 1, 2, 3 is coming up and is to be expected. Sorry. It was early 2008 and during the surge far too many people got pushed to the side and rolled over. Back then, once they determined that you were too far gone to remain on active duty you only had 90 days by regulation to be seperated so that the VA could start your claim. They "owed that to you." Anyone medically retired and placed into the TDRL (Temporary Disability Retirement List) during that time period has been classified as a "Legacy" (aka: not set up for success). It was war. I get it......now. Anyone with a tattoo of a Bradley on their arm and 18.5 years under their belt can pretty much be considered a lifer. Mental health issues WILL arise when they are given a pink slip and shown the door.
I went to the VA for help and as one would imagine, the waiting list for mental health care was quite long. I BEGGED them to put me in their PTSD residential program. I was told I wasn't a priority because I didn't have legal issues DUI, assault, drug charges, etc. The wait list to even do intake with the Phoenix VA was 3 months. They referred new patients to the Vet Center on the outside. I went to the Vet Center and the best they could do was to give you group therapy with combat veterans, but no individual therapy. A Vietnam era social worker is not what I needed. I tried using Tricare (still TDRL) to get individual therapy and there was no one within 50 miles who even wore a uniform previously, let alone specialize in military trauma.
Eventually, I met the criteria for the inpatient PTSD care that I desperately needed from the VA. My self-destructive coping landed me in jail. Alcohol was not my friend. If it wasn't for the PTSD program in Menlo Park, CA I'm sure none of these conversations on RallyPoint would have ever taken place. Between the alcohol, anger, PTSD, self-pity, etc, etc......I would not have lasted much longer. I am CONVINCED, that had there been intervention by a trusted therapist (for me it needed to be a combat vet doing individual therapy) the transition would have gone much smoother for me.
Veterans with combat related PTS deserve veteran therapists; they understand us. Even if they had never been in combat, they speak the same language. I am speaking from a personal standpoint. There are great civilian therapists out there and they might know more about military trauma than anyone else on the planet, but in this kid's broken mind......
I went to school for psychology because I was desperate to spare at least one person from the mistakes I had made. I worked at Fort Wainwright, AK in their mental health department (PTSD dept.) and even without a PhD, I had great success with some really hard clients. It certainly wasn't because of my vast knowledge, skills, or education. It was purely a trust and rapport that came from the bond that we all share in the military. If a service member/veteran isn't confident that their therapist has a clue what it was like to serve, it will be very hard to make progress.
(11)
Comment
(0)

SSG(P) (Join to see)
7 y
I feel the same way, I am reluctant to share some of my stories with anyone other than a veteran...it seems exhausting to start from the beginning with a Civ. doctor. At least with a military doc, I can start in the middle. My heart goes out to the homeless for this very reason, because I know a lot of them have been pushed aside by their families as well as their friends and doctors. Left to fend like animals on the street.
(3)
Reply
(0)

CPO Andy Carrillo, MS
6 y
Establishing rapport and trust with one's therapist is foundational to the healing process; it is the first thing we learned in my 3-year rehab counseling program. I was one of a handful of veterans admitted into the program and we were, for the most part the only veterans most of my classmates had ever befriended.
(0)
Reply
(0)

1SG (Join to see)
7 y
MSG (Join to see) - yah, but who pays attention to us guys? ONLY when something goes south does anybody bother.
(2)
Reply
(0)
Show More Comments
Read This Next
RallyPoint Home