Senate confirms Marine General Joseph F. Dunford, Jr. as the next Chairman of the Joint Chiefs of Staff. 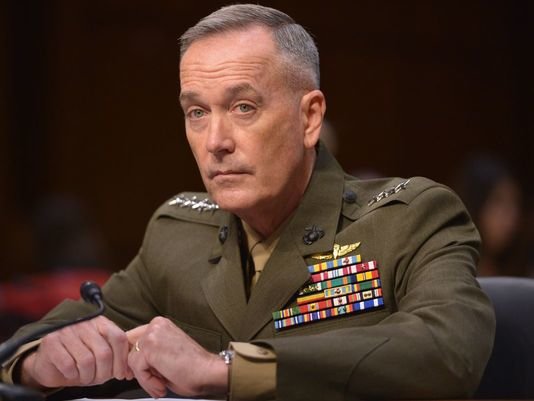 The Senate confirmed Marine Gen. Joseph Dunford Jr. as the next chairman of the Joint Chiefs of Staff on Wednesday, after a brief dispute between Pentagon leaders and the chamber's leading critic of military sexual assault policy.

The spat between Sen. Kirsten Gillibrand, D-N.Y., and military officials had nothing to do with Dunford's credentials but instead centered on data of sexual assaults at large military bases, information she has been seeking for years.

She stalled the confirmation process for about two days until Defense Secretary Ash Carter offered assurances to her Wednesday morning that the information would be made available soon.

Dunford, who has served as commandant of the Marine Corps for the last year, was confirmed without opposition just a few hours later.

He received near universal praise from senators after he was tapped for the post, and most of the criticism at his confirmation hearing focused not on him but the White House's national security strategy.

Dunford served as commander of U.S. Forces Afghanistan from February 2013 to August 2014, and previously commanded the 5th Marine Regiment during Operation Iraqi Freedom.

His career ascent has been rapid, going from a one-star general to four stars in about three years. He'll take over the top military spot in September, when Gen. Martin Dempsey is slated to retire.

The Senate vote comes amid a slate of confirmations in the waning days of the summer session.

Earlier this week, Air Force Gen. Paul Selva was confirmed as the next vice chairman of the Joint Chiefs of Staff, and Gen. Darren McDew to replace him as the new head of U.S. Transportation Command.

Sgt (Join to see)
Posted 5 y ago
General Dunford has been great for the Marine Corps, I'm sure he'll do great things as the Chairman of the JCS.
(3)
Comment
(0)

COL (Join to see)
Posted 5 y ago
Joe is a great guy and a perfect fit for this role. I can only wish him luck.
(1)
Comment
(0)
Read This Next
RallyPoint Home