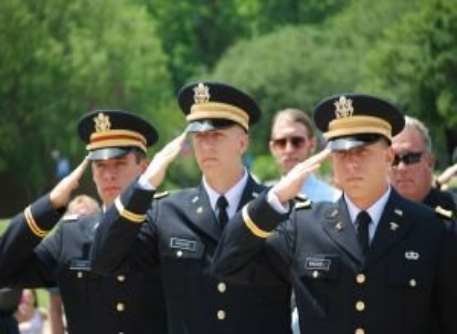 I have been dealing with this a lot. I have seen both ways. As per AR 600–25 the junior person should salute. I see a 1LT senior to a 2LT and I salute them. I have seen many instances where this does not happen. Most see a LT as a LT regardless of being a 1st or 2nd. How do you all feel about this?

"B. All Army personnel in uniform are required to salute when they meet and recognize persons entitled to the salute. Salutes will be exchanged between officers (commissioned and warrant) and enlisted personnel, and with personnel of the Armed Forces of the United States..."
Posted in these groups:

LTC Gene Shewbert
Posted >1 y ago
I agree and support the regulation when it comes to saluting, but the truth is the salute is a time honored recognition between warriors.&nbsp; It is rendered out of respect for each other and the tasks we are asked to perform.&nbsp; We too often see saluting as some obligatory requirement to recognize rank.&nbsp; Too often I heard Non-commissioned officers stating, "that LT is barely out of school, with my experience he should be saluting me."&nbsp; When I have encountered this, I have always taken the position of your right...you have a great deal of experience and as the Trainer of Soldiers it is your responsibility to TRAIN that officer and bring&nbsp;him or her&nbsp;up to speed with&nbsp;their duties and skill sets....it isn't about rank...its about creating a survivable combat team.&nbsp; Recognize the fact that every Soldier took an oath...put on their uniform and understands the responsibility....exchange the salute as kin warriors.
(546)
Comment
(0)
show previous comments

Col Jonathan Brazee
2 y
SGT Dan Gray - I thought I was done with this, but if you are inferring or accusing me of breaking regulations, then I guess not. That is something that needs to be addressed. If you show me where in the UCMJ it specifies that a servicemember is required to refer to someone of a higher rank as a "superior" and prohibits the use of "senior," then your argument holds merit, and I will admit to 34 years of wrongdoing while in uniform in two different services and 10 years since my retirement. Until then, there is nothing stating that I must use the term as you so opine, and certainly not the UCMJ. I simply stated an aside to the question of saluting, and that was my preference for the term "senior." You may think my conclusions and choices are specious and not in alignment with your own preferences, but that does not mean that I am somehow acting against the UCMJ.
(0)
Reply
(0)

SSG (Join to see)
5 mo
Excellent well put we are all war fighters, no job is above another we all are brother ,and sisters in arms. Only equal by attitude make all succeed no matter who we are we all breed the same.
(0)
Reply
(0)

MG (Join to see)
Posted >1 y ago
When I was a young 2LT, back when the dinosaurs roamed the earth, my company commander was a 1LT. He was a great leader and a great mentor. I would have considered it disrespectful not to salute him. Less because of his rank, but more because of who he was and the position that he held. Should we feel any different about LTC's saluting COL's or BG's&nbsp;saluting MG's? Of course not. Each is entitled to a salute IAW military regulations and customs and courtesies. I would feel bad if I hadn't rendered a salute to that 1LT who helped me get to where I am today!
(456)
Comment
(0)
show previous comments

TSgt Gary McPherson
2 y
Col Jonathan Brazee - As former spit and polish marine it did cause me problems at first when I joined the USAF. lol
(1)
Reply
(0)

Lt Col Paul Maxwell
>1 y
Good point. In that scenario, where the 1LT is the commander, and not a peer / fellow platoon or flight leader It makes sense, esp in formation, ceremony. But for the average 1LT/ 2LT cross traffic in/out of buildings, mess hall, billets... a verbal hello greeting was always quite reasonable without salute.
(0)
Reply
(0)

CDR (Join to see)
9 mo
MAJ (Join to see) I always find this question mystifying. As a newly commissioned butter bar ENS with 22 years enlisted time, it never crossed my mind not to salute a 24yo LT(jg). There stands an O-2, and I'm an O-1, therefore I salute. When said O-2 screwed up, I fell back on 7 years as a CPO and conducted some respectful JO training. Sometimes even rhe best of us need to be reminded that it's not about us; it's about the nation we serve and the uniform we're honored to wear in that service.
(1)
Reply
(0)

SFC (Join to see)
Posted >1 y ago
The other day I watched our Battalion CSM salute a brand new WO1 who had
just recently returned from WOCS. The WO1 looked surprised, embarrassed and
proud all at once and as for the CSM, he was doing what was right and
respectful and thought nothing else of it. It warmed my little NCO
heart. Be the example.<br>
(436)
Comment
(1)
show previous comments

Col Daniel Henkel
2 y
You are due the salute based on rank! - You earn respect based on leadership!
(7)
Reply
(0)

COL Bill Stoltzfus
2 y
In a similar example I was commissioned 2LT after being an SP6 for about a year. I saw 2 of my WO pilot unit members that had been unaware of the pending action; within 1 hour of my promotion. After a quick second look they each smartly saluted and congratulated me. They had always respected me as an enlisted soldier prior to this day, and I have them each the traditional $1 for the first salute given.
(2)
Reply
(0)

CW2 (Join to see)
2 y
My first salute as a WO1 was from a SGM. It was easily the proudest and most confusing moment of my life.

CPT Daniel Cox
2 y
My first salute as a Second Lieutenant was the ROTC Tac NCO. He collected a Silver Dollar from each of us upon commissioning. I was honored to have Merlin Olsen (L.A. Rams and NFL Hall of Famer, Actor, and a top ROTC Cadet who was deemed too big to be commissioned, even though he was the Cadet Battalion Commander at Utah State University and Top Five Cadet Nationally) pin my bars on one side with my mom on the other.
(0)
Reply
(0)
Show More Comments
Read This Next
RallyPoint Home