Should charges be leveled at West Point Cadets who knowingly injured other Cadets in a Weaponized Pillow fight? 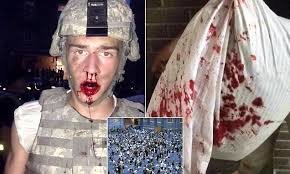 Cadets knowingly beat and seriously injured other Cadets in a yearly pillow fight event. The actions of those who weaponized (don't laugh) their pillows with the intent of harming other Cadets in the yearly fight are being investigated.
It's disturbing that this was observed by upper classmen and allowed to continue and that staff knew of it's occurrence and did not oversee or stop it from occurring. There is failure on multiple levels.
I'm sure it's seen as a right of passage at West Point but I can't get around the fact that they were intentionally seriously injuring their own comrades. It's obvious that the goal was to injure and be injured given the Upper classmen telling the plebs, to wear their body armor and kevlar helmets. If this had happened in a Unit, charges would be filed and heads would roll.

For generations, freshmen cadets at the United States Military Academy have marked the end of a grueling summer of training with a huge nighttime pillow fight that is billed as a harmless way to blow off steam and build class spirit.

But this year the fight on the West Point, N.Y., campus turned bloody as some cadets swung pillowcases packed with hard objects, thought to be helmets, that split lips, broke at least one bone, dislocated shoulders and knocked cadets unconscious. The brawl at the publicly funded academy, where many of the Army’s top leaders are trained, left 30 cadets injured, including 24 with concussions, according to West Point.

In interviews, cadets who asked that their names not be used for fear of repercussions in West Point’s strictly controlled culture, said the fight had left one cadet with a broken leg and dislocated shoulders in others. One cadet was knocked unconscious and taken away in an ambulance and had not returned to school, they said. But a spokesman for the academy, Lt. Col. Christopher Kasker, said all cadets had returned to duty.

Though talk about the brawl on Aug. 20 had circulated on social media, West Point did not confirm it to The New York Times until Thursday.

Colonel Kasker said the annual fight is organized by first-year students as a way to build camaraderie after the summer program that prepares them for the rigors of plebe year.

Upperclassmen overseeing freshmen “allowed the spirit activity to occur out of the desire to enhance the spirit of the class,” Colonel Kasker said, adding that those upperclassmen took “mitigating measures” to prevent injury, including requiring cadets to wear helmets.

But video shows that many of the cadets did not wear helmets. Cadets said that in at least a few cases helmets became weapons stuffed into pillowcases.

“West Point applauds the cadets’ desire to build esprit and regrets the injuries to our cadets,” Colonel Kasker said. “We are conducting appropriate investigations into the causes of the injuries.”

So far no cadets have been punished, and the academy has no plans to end the annual tradition. Colonel Kasker said commanders were not available for comment on Friday.

Video of the fight posted online showed crowds of cadets, some wearing body armor as well as helmets, surging together in a central quad, their yells echoing off the stone walls of the surrounding barracks.

As the first-year cadets collided into a boil of white pillows, pummeling one another in the fading light, Army-issued glow sticks flew through the air and an impromptu cavalry of riders in laundry carts dashed in, cushions swinging. At one point, a smoke grenade appeared to go off.

Photos posted later on Twitter show plebes, as freshmen are called, with bloody faces and bloody pillows, and at least one person being loaded into an ambulance.

“My plebe was knocked unconscious and immediately began fighting when he came to,” an unnamed upperclassman, who was apparently observing from the sidelines, wrote on the social media forum Yik Yak. “I was so proud I could cry.”

As the battle continued, cadets clustered around at least two classmates who had fallen, apparently unable to get up. Others stumbled to a medical area set up beside the fracas.

“4 concussions, 1 broken leg, 2 broken arms, 1 dislocated shoulder, and several broken ribs. That’s one hell of a pillow fight. #USMA19,” one freshman posted on Twitter, echoing many who seemed to see the injuries as a point of pride.

In interviews, cadets said they saw the fight as a chance to have fun after seven weeks of basic training in which they were not supposed to speak to one another. It was also a chance to show grit.

“If you don’t come back with a bloody nose,” a male first-year cadet said his upperclassman commander told him, “you didn’t try hard enough.”

West Point pillow fights have existed since at least 1897, according to testimony in a 1901 congressional inquiry on hazing at the school, but there have been no other reports over the decades of injury until recently.

In 2012, a cadet put a lockbox in a pillowcase, injuring others, and in response, the 2013 fight was canceled, cadets said.

During the first winter storm of the year, Air Force freshmen try to throw their cadet leaders into the snow. But in 2012 the snowball fight turned into a brawl, and 27 cadets were treated for concussions, cuts, broken bones and a bite wound.

The Air Force did not punish any cadets at the time, choosing to treat the episode as what a spokesman called “a teachable moment.”

West Point cadets had mixed reactions to the injuries this year. Some saw them as a rite of passage in a school known for being tough; others saw a lack of judgment and restraint.

“At first the body count, people were joking about it,” a female first-year cadet said. “My friends were really excited. And right after, when we learned how many people had gotten hurt, everyone felt totally hard-core. I know it looks weird from the outside, but it really bonds us.”

But when she saw a male cadet being loaded into an ambulance outside her dorm room, she began to have second thoughts.

“If you are an officer, you are supposed to make good decisions and follow the rules. You are supposed to mediate when everyone wants to go out and kill everyone,” she said. “The goal was to have fun, and it ended up some guys just chose to hurt people.”

http://www.nytimes.com/2015/09/05/us/at-west-point-annual-pillow-fight-becomes-weaponized.html?smid=tw-bna&_r=0
Posted in these groups:

Lt Col (Join to see)
Posted >1 y ago
Many reasons make this unacceptable. One being that now they have risked causing medical disqualifications and service related injuries. Next is the fact that if the story was not about Academy cadets but enlisted troops, you can almost certainly bet that people would be getting Article 15's and possible summary court martial's for assault and battery. I would say some form of punishment needs to be handed out that the situation was allowed to get out of hand. Those who encouraged people getting hurt should probably be expelled from the academy. If they get away with it, then what kind toxic leadership crap will they bring into the fleet?
(31)
Comment
(0)
show previous comments

1LT William Clardy
>1 y
SGT William Howell, the simple answer to your question about Article 133 is that the cadre whose duty it is to provide oversight and guidance to the cadets should also be relieved for cause. Any cadre or upper-class cadets who actually countenanced the bloodletting in advance (even if just by an admonition of "if you aren't bleeding, you weren't trying") should face either formal charges or, if the Commandant considered it appropriate, be offered non-judicial punishment as an alternative to a formal court martial.

Any barracks-room barrister would also know that the "consensual assault" defense would fail on the grounds that the consent was predicated on an implicit limit to the severity of the assault. Agreeing to a pillow fight and then swinging a brick voids the consent.
(6)
Reply
(0)

SGT William Howell
>1 y
1LT William Clardy You have a point. Did not think that far in advance. I concede. Still I think the Army is going to hope this dies before this is considered a scandal. There will be heads to roll from commissioned staff if this does not die.
(1)
Reply
(0)

1LT William Clardy
>1 y
And well there should be, SGT William Howell. This is exactly the sort of fiasco that the cadre should be a final safeguard against. Even if they were caught unaware by a small renegade contingent of cadet leadership, by the next sun-up they should have had a solid handle on which cadets were responsible enough to be expelled from the Academy and been visibly (pour l'encouragement de les autres) expediting that process long before the NT Times got wind of anything.
(2)
Reply
(0)

SPC Bob Mulholland
>1 y
Hopefully commanding Officers will be Court Martialed. If this was a regular Army company, what would happen to those in charge?
(1)
Reply
(0)

SSG (Join to see)
Posted >1 y ago
Damn right they should be punished. They made the whole institution look like a bunch of idiots.

The real crime here is who let a bunch of officers in the larval stage running around without any NCOs. There are leash laws you know.
(26)
Comment
(0) 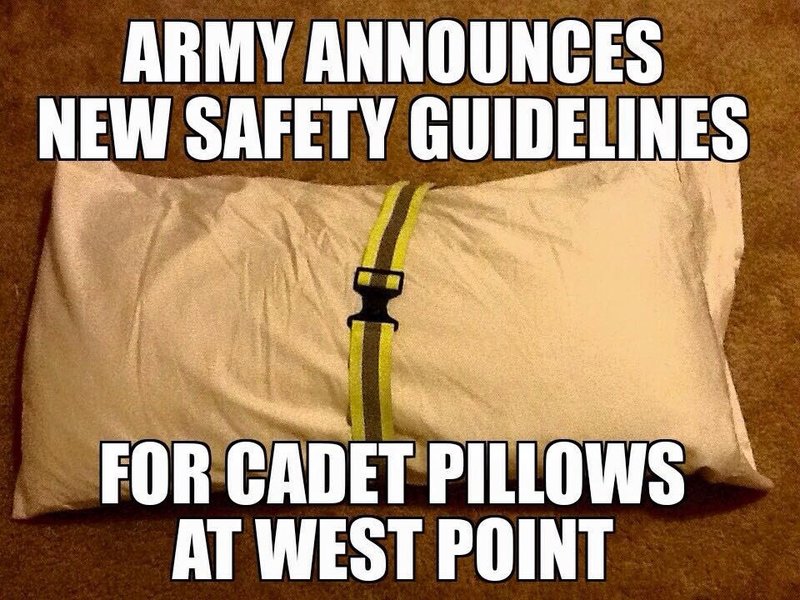 CPT (Join to see)
>1 y
CW4 (Join to see) I watched half a dozen different videos showing the "pillow fight" and I noticed that it appeared that they were 100% in compliance with wearing their reflective belts with their PT uniform. I had numerous off color dry Humor comments pop in my mind upon seeing this.
(2)
Reply
(0)

SSgt (Join to see)
>1 y
The buckle on the belt could be dangerous... maybe remove it and stich the belt to the pillow?
(1)
Reply
(0)
Show More Comments
Read This Next
RallyPoint Home