The soldiers creed. The oath a soldier in the Army must take during training. He/She must always follow the creed, the creed shall never be broken.

https://www.youtube.com/watch?v=DvrirQIK0y0
Posted in these groups:

SPC Jan Allbright, M.Sc., R.S.
Posted 7 y ago
The Airborne Creed is still on my wall ... I love the opening paragraphs...

I am an Airborne trooper! I jump by parachute from any plane in flight. I volunteered to do it, knowing full well the hazards of my choice.

I serve in a mighty Airborne Force – famed for deeds in War – renowned for readiness in peace. It is my pledge to uphold its honor and prestige in all that I am – in all I do.

I blaze the way to far flung goals – behind, before, above my country’s enemy’s front lines.
(1)
Comment
(0)

SFC (Join to see)
Posted 7 y ago
SPC Angel Guma, The Soldier's Creed, The Creed of the Noncomissioned Officer, and not a Creed, but a song, one of my favorites that was introduced to me while working with 7th SFG(A), The Ballad of the Green Beret. They all get me going!!
(1)
Comment
(0)

To all of the United States Armed Forces, with our thanks. Visit us at http://www.thewarriorsong.com or on iTunes Bernie Pershey - Marching Snare Drums Justi...

LTC (Join to see)
Posted 7 y ago
Thr creed was not around when I was in. However I take a lot of pride in that creed even more than the officers creed. First and formost we are all soldier and that title and creed means more to me than any other rank or title!
(1)
Comment
(0) 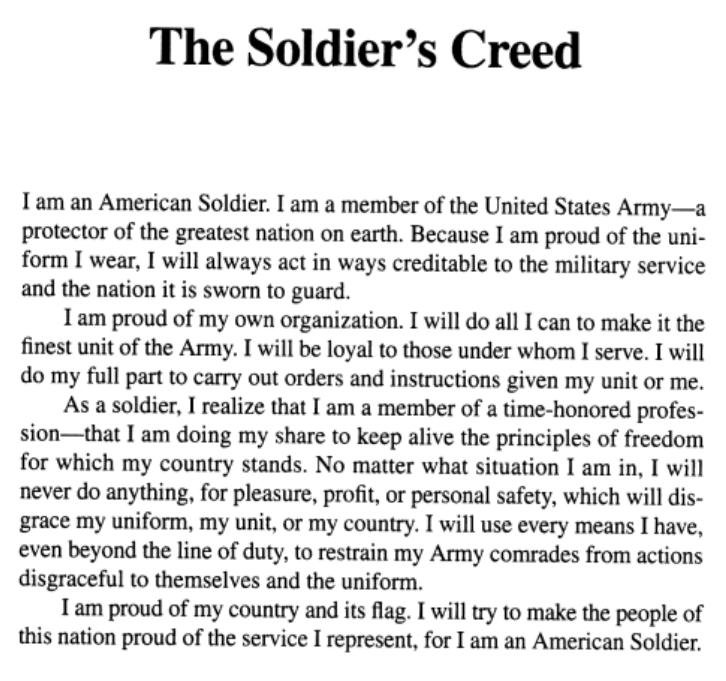 With all due respect, LTC (Join to see), an earlier version of the Soldier's Creed very much was around while you were in. It wasn't anywhere near as macho as Shinseki's revised version, but it existed and enlisted soldiers were required to learn it.
Also, for whatever it's worth, it didn't need a war to make sense.
(0)
Reply
(0)
Show More Comments
Read This Next
RallyPoint Home