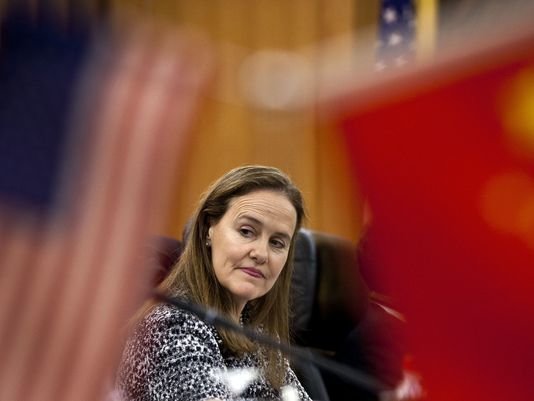 WASHINGTON – Eyebrows were raised earlier this month when an unannounced but widely anticipated trip by Secretary of Defense Chuck Hagel to Asia in early December was abruptly called off.

When reporters in the Pentagon's press room began to push for answers and speculate over the fate of the secretary, they were quickly assuaged by a host of officials who brushed away such concerns, pointing to upcoming Congressional testimony as the cause for what they insisted was merely a postponement of the trip.

Now we know that — according to the official accounts, at least — Hagel had for weeks been in discussions with the White House about his future, and it was clear that he wasn't long for the top job in the Pentagon.

But when the announcement came on Monday, with no successor named to be chewed over during the lame duck session of the 113th Congress, a litany of familiar names cropped up as Hagel's potential replacement.

At the top of the list — as she has been before — sits Michele Flournoy, a longtime defense expert who has spent a career moving in and out of government service, academia and the think tank world.

Former deputy defense secretary Ash Carter is also on the short list, and it is widely held that either one is more than qualified to take the Pentagon's top job.

But some there is a real question of how much it will ultimately matter who gets to sit in the big seat at the five-sided building across the river, given the White House's penchant for controlling national security matters tightly, along with a powerful National Security Council that has the president's trust and clashed not only with Hagel, but his predecessors Leon Panetta and Bob Gates.

One defense analyst, Byron Callan of Capital Alpha Partners, asked "why would [Flournoy or Carter] really want to do this for what could be a very short period of time?" The Obama administration's clock runs out in January 2017.

For anybody considering this position now, especially those thought to be friendly to a democratic administration, Callan thinks the answer might be "thanks but no thanks, I'll wait until 2016" and see what their chances are under the next administration, particularly if Hillary Clinton emerges as a frontrunner.

But not everyone sees such reluctance once a call from the White House comes.

"The reality is you just can't count on that call from the White House ever coming, and I think it's extremely compelling when the president of the United States asks you to take on a cabinet level position" said one former high-ranking Pentagon official who asked not to be named.

The official pointed out that Bob Gates replaced Donald Rumsfeld with only two years left in the Bush administration, and managed to not only be a driver of change, but extended his stay into the Obama administration.

Underlining Hagel's imminent departure is a stark reminder of how much things have changed since his taking the job in February 2013, and how much the White House's expectations have shifted of what is needed in a secretary of defense.

When Hagel was first nominated, the White House "probably thought this was about drawing down and keeping the budget in check and shifting focus to Asia, but none of that is today true" the former official said. "The bigger global strategic issues have come back to the forefront, so the administration would likely look for someone who has the background to think through those problems."

While the big strategic issues of the Islamic State group, Iraq, Syria, Russia, and China are still being grappled with both at the White House and in the Pentagon, the management of the Pentagon itself is going through a time of disruptive change, and with it a management restructure — even if relatively modest — will likely be one of the results of sequestration.

And here, Flournoy appears well placed to take the reigns. After vacating the undersecretary of defense for policy job which she held from 2009 to 2012, Flournoy headed for the Boston Consulting Group, where she wrote several op-eds outlining ways to cut defense spending. One defense consultant has also said that while there, Flournoy delivered a series of private talks to clients about how critical it was to reform management processes in the Pentagon.

It's this insider perspective that the White House is likely looking for.

During his Monday press briefing, White House spokesman Josh Earnest said that whoever is nominated to take over at the Pentagon will be "somebody who knows the inner workings of the department well" and has the "leadership skills and management skills that are necessary" to manage such a large organization "in a time of crisis."

Adding to the sense of crisis is the fact that any new secretary will face questioning from a Republican-controlled Senate Armed Services Committee.

Outgoing Republican head of the House Armed Services Committee Buck McKeon told CNN on Monday that the president is "gonna have a very tough time getting any nomination through [Congress] so we may have Secretary Hagel there for a while."

But several sources don't see either Flournoy or Carter has having much difficulty in getting through the confirmation process, McKeon's comments aside.

And there's not a lot of time.

Given the dwindling amount of time left in the Obama administration, and having already been burned in Hagel's confirmation hearings which exposed holes in his knowledge of administration policies, the White House will most assuredly "want someone who can hit the ground running" the former defense official said. "So that limits your pool of people under consideration because you don't have 6 months" to spool up.

Speaking at the Bipartisan Policy Center on Oct. 22, Flournoy nicely laid out a series of views that are very much in line with the message that has come out of the White House and Pentagon over the last several years, though perhaps more eloquently stated than Hagel has often managed to express.

"There's a huge disconnect between where we see the world going, the demands that are going to be placed on the US military and what our policy is with regard to defense spending," she said.

"Congress has got to give the Pentagon the authorities to reform, to be able to spend its money smarter and more efficiently and arrest cost growth in certain areas. Even with that you can't expect to defend the nation under sequestration. The risks are real and they are accumulating…you've got to invest more in defense over time, particularly regaining readiness in the near term and investing in the capabilities we're going to need for the future."

In keeping with the Better Buying Power and Offset initiatives being pushed by deputy secretary of defense Bob Work and chief weapons buyer Frank Kendall, Flournoy also insisted on the importance of "letting the department come into the 21st century as far as its business practices."

Writing in The National Interest magazine in August with Richard Fontaine, president of CNAS, the duo argued for "a sustainable brand of American internationalism" which would "reverse the harmful effects of sequestration and address the issues of skyrocketing military benefits and gross inefficiencies in the Department of Defense in order to reinvest in defense preparedness and future combat capabilities" which also emphasizing "the long-term American relationship with Iraq and Afghanistan in order to protect U.S. interests there."

Fine words, but the fact remains that the Obama has developed a bad reputation when it comes to secretaries of defense, as seen by the fact that it has burned through a secretary every two years.

At the Reagan National Defense Forum in California earlier this month, former secretary Panetta lamented that "because of that centralization of authority at the White House, there are too few voices that are being heard in terms of the ability to make decisions."

Sitting on the same panel, Bob Gates added that "it's in the increasing interest of the White House to control and manage every aspect of military affairs. When a president wants highly centralized control of the White House at every degree of micromanagement that I'm describing, that's not bureaucratic, that's political."

http://www.armytimes.com/story/military/pentagon/2014/11/25/former-official-strategic-thinker-needed-pentagon/70084092/
Posted in these groups: Pentagon

CW5 (Join to see)
Posted 7 y ago
I think Ms. Flournoy may be a person who can do the same thing as Secretary Gates: take the reins now and stay on past the 2016 presidential election - regardless of who wins in 2016. At least I hope she can. And I hope she's the nominee, because I think she's uniquely qualified to be Secretary of Defense.
(5)
Comment
(0)

MAJ (Join to see)
7 y
She and LTC (R) John Nagl helped start the Center for a New American Security, one of my favorite think tanks. I think that she has both the intellectual chops as well as the respect of the Hill and Pentagon to do the job. I wouldn't mind serving under her. (Although, I'll gladly serve under anyone whom the President nominates.)
(2)
Reply
(0)

SFC Mark Merino
Posted 7 y ago
My heartfelt prayers go out to anyone who has the courage to take on this responsibility. Please have the courage to stand up for what is known to be right in your heart and do not merely act as a puppet for others to pull your strings. The fate of our brave service members will be in your hands.
(5)
Comment
(0)

CPT Zachary Brooks
7 y
Mark Merino for Sec Def! He is influential (so says Rallypoint) and he cares about soldiers and this country!
(0)
Reply
(0)

SP5 Richard Maze
Posted 7 y ago
As you may have seen, she is declining the job.
(2)
Comment
(0)
Show More Comments
Read This Next
RallyPoint Home