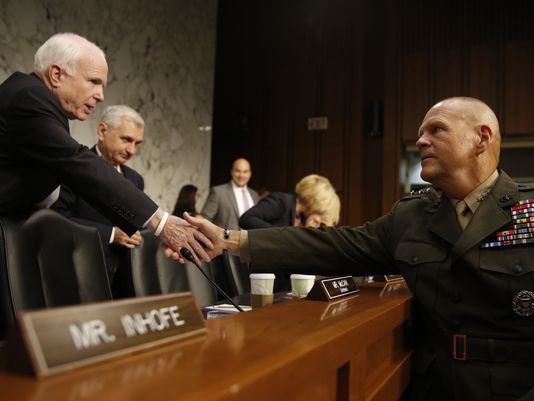 The nominee for next commandant of the Marine Corps wears a memorial bracelet in honor of a Marine he never met.

Lt. Gen. Robert Neller wears a black cuff engraved with the name of Cpl. Eric Lueken, who was killed in Iraq's Anbar province in 2006 at the age of 23. The bracelet is a reminder of the responsibility that comes with the stars on his shoulder, Neller said.

At the time of Lueken's death, Neller was the deputy commanding general for operations for I Marine Expeditionary Force (Forward) in Iraq. A new technological adaptation was then under hot debate: the addition of rollers and arms to the front of tactical vehicles to better protect against improvised explosive devices. And Neller was in the middle of the discussion.

"I was told by a bunch of well-intentioned Marines that if we develop rollers we would create a hazard for the vehicle, we’d frag the gunners, and it was a bad idea," Neller told Marine Corps Times following his confirmation hearing before the Senate Armed Services Committee on Thursday.

So when he got a report of the death of Lueken, a member of 3rd Battalion, 3rd Marines, it stopped him in his tracks.

"He was in a Humvee without a roller," Neller recalled. "And I kind of thought to myself, 'You’re supposed to be a general, you’re supposed to make decisions. You’re listening to all these guys tell you why this is a bad idea. You think it’s a good idea. So what are you hesitating for, what are you waiting for?'"

At the next meeting to discuss putting mine rollers on vehicles, Neller said he heard the same objections but wasn't swayed.

Before summer of 2006, Neller said no vehicles were pushing mine rollers anywhere in Iraq. By 2008, they had become standard gear. The technology was used throughout the wars in Iraq and Afghanistan and remains a military asset.

The story also speaks to Neller's philosophy as a commander and may offer a clue to his future as commandant of the Marine Corps by demonstrating the value he places on decisive leadership and making big changes without unnecessary hesitation. Neller and other Marine leaders face tightening post-war budgets, acquisition challenges, and tough decisions on integrating women into combat roles.

The bracelet, Neller said, was a token to keep him from doubting his own convictions or hiding behind inaction.

Neller is expected to be confirmed before the Senate takes its summer recess in early August.

http://www.militarytimes.com/story/military/pentagon/2015/07/23/incredible-story-behind-lt-gen-robert-nellers-memorial-bracelet/30569045/
Posted in these groups:

Sgt Jerami Ballard
Posted >1 y ago
As a 3/3 Alum, I find this very interesting. It certainly shows that my old battalion has a stronger pull than one would think.
(1)
Comment
(0)

SGT Ben Keen
Posted >1 y ago
What an amazing point of view from the GO. I know I wear my bracelet as a reminder to live to do better; to take the opportunities I have now that CPT Seifert didn't have to truly make a difference to those around me.
(1)
Comment
(0)