The killing of Peter Kassig; Are we really becoming so desensitized? 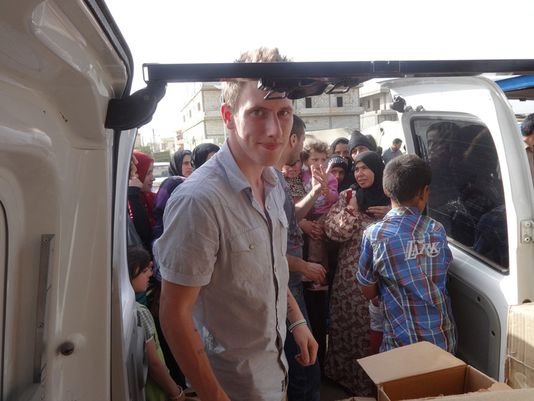 Have we really become so desensitized, so quickly?

Another American has been killed at the hands of these monsters. Where's the outrage? Where's the fire in our Nation's hearts? The first one sent shockwaves through our hearts and minds. For a brief moment in time, we unified into a singular message. "This is wrong, and we need to do something." This one is barely a blip on the RADAR. Has the public beheading of an American at the hands of the enemy really become modus operandi in our hearts and minds? Just one more thing to fill a Sunday morning news cycle, and is of no concern unless there's an election around the corner?

Don't feel bad. I'm not pointing my finger at you. I have 3 fingers pointing squarely back at me. I saw this article this morning and said, "Really? Again?" just like you probably did. That fills me with shame.

What am I doing to change the outcome?

Read. Learn. Feel something. Do something, even if it's spreading the word, and generating the conversations Americans need to have.

http://www.foxnews.com/world/2014/11/16/new-isis-video-purportedly-shows-beheading-american-hostage-peter-kassig/
Posted in these groups:

CW5 (Join to see)
Posted 7 y ago
It is a brutal thing, SCPO Albert Lee Smith. I watched the video; those folks are barbaric. We are augmenting the fight with a few thousand "advisors." I guess my hope is that the Islamic world will take care of this group on its own. (Iran, for example, does not want to see ISIL growing in strength and numbers in that area.) But I think we should be ready, at least, to provide needed weapons, supplies, and advisors to the people on the ground who are fighting ISIL.
(3)
Comment
(0)

SCPO Albert Lee Smith
7 y
CW5 (Join to see) I hear what you're saying. My hope is that they stat to take care of themselves as well. ISIL presents a clear and present danger to everyone, even those that they claim to be in agreeance with. They continually slaughter people without regard to... well, anything. Sooner or later, if not stopped, we will be fighting these guys on our own soil.
(1)
Reply
(0)

Capt Richard P.
Edited 7 y ago
Posted 7 y ago
SCPO Albert Lee Smith, I wont say that what ISIL is doing is ok. They are scum of the lowest order. But military action against them should require a declaration of war. Our last declaration of war was for WWII. We erode our Constitution, which we swore to support and defend by acting militarily without declarations of war. Then there's the deeper consideration of what should guide our lethal foreign policy.

I recognize the desire for vengeance against people who hurt our people. I also recognize the fear that failure to preemptively destroy an enemy's capability to strike may lead to future attacks. Nevertheless, I would urge careful consideration of what drives our foreign policy, particularly our violent foreign policy, and which model we should follow: the example of Hamilton? of Jackson? of Jefferson?
http://www.theatlantic.com/international/archive/2014/09/why-americas-pursuing-isis-to-the-gates-of-hell/379622/

Why America Is Pursuing ISIS to the Gates of Hell

The beheading of two journalists has transformed public debate over U.S. foreign policy.

Sgt Philip Edwards
7 y
Gentlemen,
Make no mistake, these people (I use the term loosely) are planning an attack on our soil. I hate to be a Captain Bringdown but they hate us, pure unadulterated hate. We need to deal with them and at some point we'll be forced into it and it'll be here in the U.S. unfortunately. We are seeing the influence they have with people here in our own country with these so called lone wolves. I just hope we can catch them before they organize into cells here, it may be too late already.

I understand the reluctance to put a major ground force in place in Iraq. Americans are war weary but more importantly if we were to put "boots on the ground" in large numbers we know these scumbags would run and hide in the general population. Some may stand and fight but they know as well as we do they wouldn't last long fighting us straight up. We are as the old saying goes, stuck between a rock and a hard place.

SCPO Albert Lee Smith, I agree with you and sadly it'll take something far worse than 9/11 to cure this problem of apathy and complacency.
(0)
Reply
(0)

Capt Richard P.
7 y
Sgt Philip Edwards You may enjoy this discussion on the topic of ISIL. I went a little long winded on an answer to 1LT L S there, on why I bias toward caution in committing lethal foreign policy, even against enemies like these. BLUF: Empires stumble into being empires. And Empires have nasty life-cycles.

The deployment of up to 1,500 more troops authorized for Iraq. | RallyPoint

Today our President authorized an additional 1500 more troops to Iraq to battle ISIS. If all 1,500 are deployed, it would almost double the American presence in Iraq. The troops will serve in a non-combat role, expanding the U.S. mission of training and advising Iraqi forces, the "Pentagon said". That will include helping Iraqi forces in the highly volatile section of Anbar Province mostly under ISIS control. As reported by NBC....

Not only are foodstuffs, medical supplies—even clinics—going to ISIS, the distribution networks are paying ISIS ‘taxes’ and putting ISIS people on their payrolls. GAZIANTEP, Turkey—While U.S. warplanes strike at the militants of the so-called Islamic State in both Syria and Iraq, truckloads of U.S. and Western aid has been flowing into territory controlled by the jihadists, assisting them to build their terror-inspiring “caliphate.” The aid—...

CSM Carlson C.
Posted 7 y ago
It's sad state of humanity that this group of people think that the way to promote their cause is to torture and kill non-combatants and publish the videos of it to instill fear. It further fuels the misdirected hate and anger towards the Muslim and Islamic population. But whit this particular group, the anger also from those in the middle east that are tired of being bullied. Eventually there will be no choice but to place boots on the ground to prevent the spread of the ISIL threat, and with that, the entire might of the U.S. Military
(1)
Comment
(0)
Show More Comments
Read This Next
RallyPoint Home