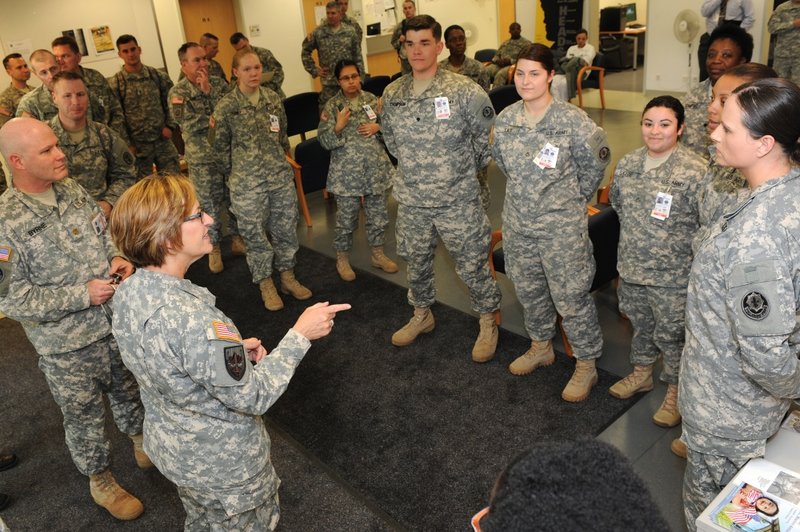 I conducted a barracks inspection today. One of my Soldiers, not white, had a modified rebel flag hanging in his room. On it was an eagle and written "these colors don't run".
While common sense to some says this probably shouldn't be there, is there anything that specifically says yes or no. AR 600-15, para 2-4 says a commander can have certain flags and etc removed to maintain good order and discipline.
Who or what determines that this is a violation. What may be offensive to some may not be to others, religion, heritage, etc. Your thoughts?
Posted in these groups:

SPC Christopher Smith
Posted >1 y ago
I have a "Rebel" flag tattooed upon my right shoulder. I know the history and meaning of my flag. Although history was written by the victor, the South has a strong and proud history. If someone has an issue with a symbol that is a strong part of our cultural and military history they should crack open a book.
(1.1K)
Comment
(12)
show previous comments

SGM (Join to see)
1 mo
BLUF: I have no tattoos and only the stars and stripes are flying in front of my house.
I'm a pasty ass New Englander. I'm not offended by a British flag (by commonwealth or country). Although my "roots" go back to the 1700's Wales and Scotland, I personally think that the Welsh flag is bad ass. But, alas, I fly only the flag I want. Enjoy your tat. You bought it. It's yours. As long as there is "NO REGERTS" misspell.
(1)
Reply
(0)

1LT Kurt Mccarthy
30 d
You're awesome man, love free thinkers. Remember, free thinkers aren't appreciated I'm the military. Also, history was written by man, and the more research I do, the more I start to realize that we have been manipulated and lied to since childhood. Some of these history majors have been spoonfed by the School system and they will shoot down any research you try to present to them. I don't think it's all fake about the South, but I do think there is a lot that has been fabricated or taken to the extreme. That's just the Civil war, WWI, WWII, even our war now has a lot of questionable instances. Keep doing what you're doing man, proud of you for sticking to your beliefs and not conforming!
(0)
Reply
(0)

SP5 James Elmore
30 d
I agree and be wary of the authors and things written in Jim Crow era. TV and movies tried to play down the truth. The newspapers of the tell the real stories in North and South. The truth is there if one chooses to dig and discard that written by “justifiers“ and racists. The traitors fought against the USA.
(0)
Reply
(0)

SSG Gerhard S.
Edited >1 y ago
Posted >1 y ago
Just a few thoughts. First of all, Sgt Newman is correct, and SSG Woods makes the salient point that the American flag has some stains of the same color on it as well.

Secondly, what should be done if a soldier of Japanese descent displayed a Japanese flag in their room. After all we fought a war with the (then) racist Japanese as well. I can't tell you how many times I have seen Puerto Rican flags hanging in barracks rooms as well. Where should the line be drawn? How do the French feel about a Cinco de Mayo celebration when it celebrates the defeat of their forces?

The point is, the things that can potentially offend someone are legion. It is important to note that inanimate objects are not, of, and in, themselves "offensive". To be offensive, someone has to CHOOSE to be offended.

I understand I'm not citing any regulations so I'm not answering the original question, and I DO believe that the line has to be drawn.... I would draw that line closer to the Nazi flag than to the flag known as the Stars and Bars, or which Sgt Newman accurately pointed out, is known as the Battle Flag of the Army of Northern Virginia.
(1K)
Comment
(2)
show previous comments

SGT Russell Chewning
1 mo
SSG(P) (Join to see) The "states rights" thing was simple propaganda, for simple farmers, put out by white slaveowners, so they did not have to overtly come out and say that secession was really about the only right that mattered: The right to keep the income stream for southern agriculture exactly as it was, using slaves. The burdensome taxation on slave-produced agricultural goods was intentional by the federal government, intending to encourage southern plantation owners to find another way to do business. Said plantation owners had no interest whatsoever in finding a new way to do business. Senators were Not getting into fistfights on the Senate floor over unfair taxation. They were getting into fistfights because one side was an abolitionist, and the other was rabidly pro-slavery.

When using the term "states rights" as an excuse for the south dragging the whole country into the Civil War, most southerners are simply parroting some phrase they heard, and have absolutely no knowledge of the backstory of the tension caused by the fact that virtually every other first-world country on the planet had abolished slavery, with only the United States hanging on. Abraham Lincoln, a politician with well-known abolitionist leanings, got elected, and the south collectively lost their ish, and went into major propaganda mode eto get the people to support a war they never had a chance to win..
(2)
Reply
(0)

SSG Gerhard S.
1 mo
MSgt Tony Hindman actually, we're not. For one thing, PR isn't a State, and votes down referendums for statehood repeatedly. In points I've made elsewhere, when this was written, and even today some of our states had, or have elements of the confederacy included in their flags. It's also important to note that the US flag stood for slavery from the ratification of our constitution, through the constitutional amendment process making it illegal. Respectful regards.
(1)
Reply
(0)

SPC Jasen E.
1 mo
SGT (Join to see) - You're completely correct. That's what leads so many people on college campuses to shout down speakers they don't agree with. ""I don't agree with what your saying and find it offensive so you are not allowed to hear it either. My feelings have to be yours."" I was taught that life was about experiencing other ideas and cultures, not about silencing them. What a sad world this would be if we all believed, felt, and did the exact same things as everyone else.
(2)
Reply
(0)

SSG V. Michelle Woods
Posted >1 y ago
The Confederate flag offends some because of what it represents. Ok that's fair.

Let's not forget the reprehensible and atrocious things that happened in this country under the USA flag (child labor, Japanese concentration camps, segregation).

I'm just pointing out there is a much larger picture here.
(570)
Comment
(2)
show previous comments

SPC Jasen E.
1 mo
SFC (Join to see) - I agree completely. My wife's family were slaves for a long time right here in America. She is as white as they come. I have always said of slavery, "it didn't happen to you, and I didn't do it. So let's move on!" Bad things happened to my ancestors. It didn't happen to me. Nobody alive today did it. I know the stories, but it doesn't affect me. As a Jew, should I still hate all Germans? The history is sad, but my day to day life isn't affected by this. And, NO, I am not concerned with people flying a swastika. That's on them. I choose to be bigger than that. We are not responsible for the sins of our fathers. If we are, how many generations should it last? Five? Six? Ten? You can probably find slavery in the history of every single culture on the planet. With that in mind, every person alive has a right to be offended by one culture or another. That's a sure ticket to xenophobia. Let's just worry about today and let the past be the past.
(0)
Reply
(0)

SPC Jasen E.
1 mo
It seems like people are putting too much effort into being offended by silly crap today. Who cares?!? Why care?!? There are so many better things to spend your time and energy on. Do those instead. Everybody is too concerned with controlling the actions of others rather than just living their lives. It seems like the only reason people get online or turn on the news for anymore is to see what they need to be offended by today. It's insane. Everybody on this site swore to defend the constitution which guarantees a person's freedoms in the U.S. but many are advocating controlling another person's right to free speech (visual displays are constantly being upheld by courts as speech). Think of something that you really enjoy doing. I guarantee that somebody in this country is offended by that activity. Do you want them to come and forbid you from doing that? If just one freedom can be stripped away, all freedoms are in jeopardy. If you don't like the flag, don't look at it. It works great for me! Stop trying to make people live by your standards. I don't like the rebel flag. I am Jewish and don't like the swastika. I could not possibly care any less if one or more of you want to fly one or both of them. I will still be expecting to have a good day. For those who want less freedoms in their life, there are plenty of countries to choose from that offer just that. Maybe check them out.
(1)
Reply
(0)

SP5 James Elmore
30 d
Puerto Rican flag? Why would that bother anyone? Would the flag of Virginia bother you? Lol.
(0)
Reply
(0)

SP5 James Elmore
29 d
There sure is. The difference is our flag stands for our Constitution and Declaration of Independence, not the acts of fallible men. The Confederate flags and battle flags were to preserve the enslavement of innocent people merely because of race and the power to enslave innocents. We all, I hope, work within our Constitutional framework to change unfair laws and practices. Someday we might be able meet the words of the Declaration of Independence.
(0)
Reply
(0)
Show More Comments
Read This Next
RallyPoint Home