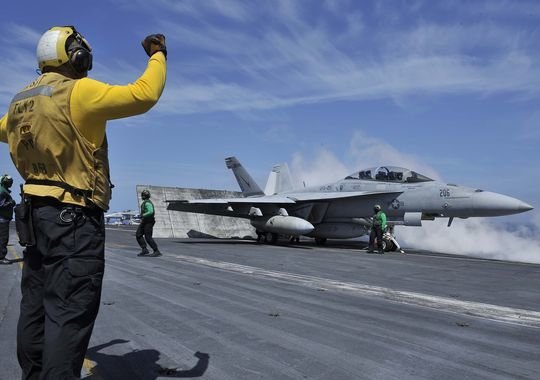 The Navy's most fearsome flotilla has arrived in the world's most unsettled region.

The Theodore Roosevelt Carrier Strike Group arrived in 5th Fleet Monday after transiting through the Suez Canal into the volatile region, according to a news release from the ship. Coalition airstrikes against Islamic State militants continue. And Saudi Arabia is striking rebels in Yemen, with news Wednesday that Iran has dispatched a destroyer to the area.

The "Big Stick" — joined by cruiser Normandy, and destroyers Winston S. Churchill, Farragut and Forrest Sherman — is in 5th Fleet to relieve the Carl Vinson CSG, which deployed from the West Coast in August.

The TR CSG brings deadly new capabilities to the fight. It is the first deployment for the E-2D Advanced Hawkeye. And the Normandy has undergone extensive upgrades that enable the strike group to fire at targets with longer range missiles.

"Maintaining a presence, both a naval and air presence, continues the 60-plus year commitment of our nation to support security and stability in the region, which is key to a prosperous global economy," said Capt. Daniel Grieco, the TR's skipper, in the Tuesday news release. "We can accomplish this by working with our regional partners and allies in order to protect freedom of navigation."

The TR won't be returning to Norfolk, Va. After its missions in 5th Fleet, the flattop is set to head through 7th Fleet to its new home port: San Diego. It will be escorted there by the Normandy, which will complete an around-the-world, nine-month cruise by the time it gets back to Norfolk.

Having made a big impression on its first port call, the TR strike group is ready to get to business.
Posted in these groups: CENTCOMCarrier Strike Groups