Update On The New Army Uniform Changes. Soldiers In A Survey Support Sergeant Major Of The Army Proposed Changes. Do You Agree/Disagree? 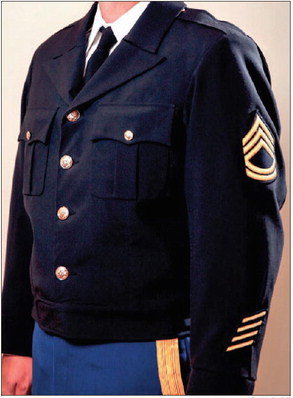 I am in agreement with the proposed changes, it depicts ESPRIT DE CORPS and professionalism in my opinion.

In a recent Armytimes Article:
Sergeant Major of the Army Dan Dailey is extending until Aug. 31 a soldier survey on several proposed uniform changes — including bringing back the iconic Eisenhower jacket, gender-neutral headgear, and black socks with the PT uniform.
The survey, which was sent to a random sampling of about 120,000 soldiers in mid-July, received more than 12,000 responses.
The majority of soldiers so far have supported every proposed change, but Dailey wants more feedback before making any recommendations to senior Army leaders, according to information from his office.
The 12,000 responses make up a good sample size, but Dailey “wants to be sure it’s what most soldiers want before moving forward,” according to his office.
To get that additional feedback, all 120,000 soldiers will receive the survey again via email. Those who have not weighed in yet will have untilAug.31todoso.Soldierswon’t be able to vote twice.
No new sample group will be chosen, according to SMA’s office.
So far, soldiers from all components and cohorts — enlisted, officer and warrant — have responded to the survey, according to Dailey’s office.
Eisenhower jacket
The original “Eisenhower,” or “Ike,” jacket was patterned after the British battle jacket. The waist-length jacket was made popular by Gen. Dwight Eisenhower during World War II.
This new version, which already has a prototype, is a windproof blue jacket meant to be worn in a workplace setting. The proposed jacket would “add one layer of etiquette” for soldiers who may need to go from the Class Bs to a more formal appearance without transitioning to the full Army Service Uniform jacket, Dailey said.
If the jacket is approved, it would be an optional item.
If soldiers like the Eisenhower jacket, it will have to go through the usual Army process for getting uniform items approved.
Drill sergeant hats
Based on feedback from female drill sergeants, Army leaders want to know if soldiers support a single campaign hat for both male and female drill sergeants.
Male and female drill sergeants now have their own distinct hats.
The current male drill sergeant hat evolved from the 1883 campaign hat, according to the Army.
The female drill sergeant hat came into being in 1972. It was designed by Brig. Gen. Mildred Bailey, according to the Army.
Blue service caps
Also known as the “bus driver cap,” the Army wants to know if there should be a single cap for both male and female soldiers to wear with the Army Service Uniform.
This question also stems from feedback that senior enlisted leaders have received from female soldiers.
Service cap vs. beret
Army leaders want to know if the blue service cap should be the required headgear for senior noncommissioned officers and higher while wearing the Army Service Uniform.
This change, if soldiers like it, would affect sergeants first class through sergeants major, warrant officers and officers.
AR 670-1 calls for the service cap to be optional for corporals and above. The beret is the primary headgear worn with the service uniform by all soldiers unless directed by the commander, according to the regulation. Just like how junior enlisted soldiers in their ASUs wear blue trousers while sergeants wear blue trousers with a gold braid, switching to the service cap marks a transition in a soldier’s career, officials said.
Black socks
The survey asks soldiers if they should be allowed to wear black socks with the new Army Physical Fitness Uniform, which is black.
The idea for black socks came up at several town hall meetings Dailey conducted with soldiers.
It’s a topic Dailey himself brought up, based on soldier feedback he had received, during a June 4 town hall meeting at Fort Meade, Maryland.
Most of the 100-plus soldiers there liked the idea.
The sock question is included in the survey to “make sure this is the majority and not just a small contingent” of soldiers who like the idea, Dailey said.
Socks worn during PT should be calf- or ankle-length and plain white with no logos, according to the current Army Regulation 670-1. The socks also must cover the entire ankle bone.
Posted in these groups:

MSgt (Join to see)
Edited 5 y ago
Posted 5 y ago
Wouldn't it be great if the branches just stuck with the uniform. Instead of trying to reinvent the wheel every couple years.
(12)
Comment
(0)

SFC Joe S. Davis Jr., MSM, DSL
5 y
I think it will bring pride amongst the past (WWII) linking our vital lineage of military history for years to come. BLUF-great concept.
(3)
Reply
(0)

We have fallen far from the standards that keep people alive when it counts, far to focused on the pomp and circumstance that was merely a tool to instill attention to detail and esprit de corps.

As of my retirement (2013) there were multiple uniforms in the ranks, and there wasn't a lot a 1SG could do to rectify it. While I appreciate that the Army has added gear and equipment that helps sustain soldiers in the environment; when it comes to garrison activities, I'd side with uniformity to promote the unit and SM's belonging to a part of a larger whole.
(1)
Reply
(0)

SGM Robin Johnson
Posted 5 y ago
The Ike jacket is a link to heritage (I actually voted for it in the green version when they were surveying for 'new' uniforms back before deciding to just repurpose 'blues' to 'ASUs'), so as long as it is optional it is great. Soldiers just don't need additional costs right now with all the other uniforms they are buying. Even though I am retired (envy, sigh) and won't benefit from the changes most are small and common sense. Even though I am puzzled by some uniform decisions (black PT uniforms? visibility anyone?) I do hope that they just STABILIZE the clothing bag. I could have created my own museum with all the uniforms I wore over the last 32 years.
(6)
Comment
(0)

MAJ Keira Brennan
Posted 5 y ago
The Army is going the way of the USAF with uniform changes... Good Grief.
(5)
Comment
(0)
Show More Comments
Read This Next
RallyPoint Home