Veteran questions Fake Marine who claims he is ‘Black Ops’ 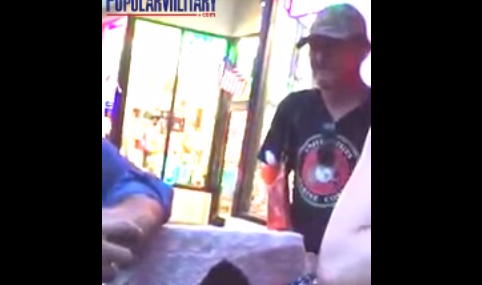 The supposed Marine veteran continued to say he was stationed in Kuwait in the mid-1980s and was responsible for instigating the Gulf War. Bill said he sensed the homeless panhandler was “full of sh*t” and decided to lead his story to see if he would agree with it. He asked him if he was part of the Black Ops team that tried to kill Sadamn Hussein before the first Gulf War. The panhandler did not offer up to much more information.

If the panhandler wanted to legitimize his “Black Ops” story in Kuwait he could have mentioned the bombing of the U.S. Embassy in Kuwait in 1983 or the high jacking of Kuwait Airways flight 221 in 1984, but he did not.

At this point Bill asked the question that usually seals the fate for someone trying to steal valor. He asked “Do you have a VA card?” The panhandler replied, “I had one on me but someone stole my backpack.” In the video you can hear either Bill’s girlfriend or Josh’s wife reply “That’s convenient.”

At this point Bill ends the conversation, shakes the panhandlers hand and tells him “good luck.” Bill claims he did not want to call the guy out because he has seen a ton of stolen valor videos of veterans “losing their cool.”

Popular Military has not verified whether the panhandler is a Marine veteran or not, but we do know that special operations vets do not refer to themselves as ‘Black Ops’. If this man is a fake Marine and collecting money by convincing people he is a vet, he is breaking the law.

https://www.youtube.com/watch?v=CJ38fdMsnAY
Posted in these groups:

C'mon man, picking on a homeless panhandler, I don't care what he says, is not really worthwhile. There was an old homeless dude in my housing project that was, alternately the mayor, governor or president, and occasionally he claimed to be Henry Kissinger.

CPT (Join to see)
Posted 5 y ago
I love watching these. These guys are so stupid. It is funny how he is such an operator but he still wears a MC shirt like a Boot.
(5)
Comment
(0)

PO1 John Miller
Posted 5 y ago
I never felt the need to steal valor or claim to be something other than what I was and am.

People ask me what I did during OIF and I tell them the truth. I reset network passwords, fixed email, and fixed computers. There was no one quite as handy with a Gerber pocket tool as I was! I made Active Directory my bitch and there was no network outage that kicked my ass!
(3)
Comment
(0)

CPT (Join to see)
5 y
I just tell them something really random. If you build it up and really let them down they will stop bugging you.
(1)
Reply
(0)

PFC(P) (Join to see)
9 mo
I love the way you say that. I wish I could come up with something like that to describe my job
(0)
Reply
(0)
Show More Comments
Read This Next
RallyPoint Home