Whatever happened to celebrities like those who served so heroically during WWII? 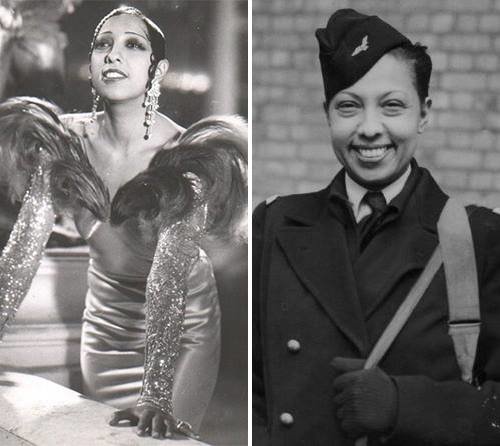 I can't imagine more than a few who would serve as heroically today as sports and film celebrities of that time. And then there's the story of Josephine Baker.

Josephine Baker is often remembered as a trailblazing singer, actress, and dancer of the Jazz Age but few people know that during World War II she supported the Allied cause by working as a spy for the French Resistance. By the start of the war, Baker had already been living in France for many years; she had become a French citizen in 1937 after marrying Jewish Frenchman Jean Lion. Throughout the war, she maintained a busy performance schedule in many of Europe's wartime cities which provided an excellent cover for her covert activities.

Baker served as a sub-lieutenant in the Women’s Auxiliary of the Free French Air Force and helped spy for the French government by gathering information at high society events held at embassies. Her fame gave her the unusual ability to visit neutral nations during the war so she assisted the French Resistance by smuggling secrets written in invisible ink on her sheet music. She helped other intelligence agents secure travel visas by including them as part of her performance entourage. Baker also helped many people in danger from the Nazis get visas to leave occupied France. Toward the war's end, she performed for liberated prisoners at Buchenwald who were too weak to move.

For her service to France during the war, Baker was awarded the Croix de guerre and the Medal of the French Resistance with Rosette. She was also made a Chevalier of the Légion d'honneur -- the country's highest decoration -- by General Charles de Gaulle. When Baker passed away in 1975, she became the first American-born woman to receive full French military honors at her funeral.

Baker is also one of the pioneering women featured in the stunning picture book "Little Leaders: Bold Women in Black History" for ages 7 to 10 at https://www.amightygirl.com/little-leaders

And, for hundreds of true stories for children and teens about female trailblazers in fields ranging from the sciences to the arts, visit A Mighty Girl’s "Role Models" biography section at http://amgrl.co/2wRJudE
Posted in these groups:

Capt Daniel Goodman
Posted 3 y ago
OK, that one was quite god...I'd known of her, certainly, though not those aspects, obviously, I'll look at the sites you'd sent in...I think, retrospectively, that the society that existed here back ten, being far simpler, tended to give rise to a more simplistic, yet more devoted, sense of patriotism, perhaps, if that might be phrasing the whole topic correctly...I've read a good deal about celebrities involved in WW2, though not her, of course...perhaps something is lost culturally as a society evolves sociologically, I'd guess, some crucial aspect of its makeup, in any event, that's as far as my reasoning takes me for moment, at any rate....
(2)
Comment
(0)

LTC (Join to see)
Posted 3 y ago
I heard of the actress I never knew that she was also a spy and a sub lieutenant in the French Underground. Very interesting!
(2)
Comment
(0)

SSG (Join to see)
Posted 3 y ago
Most celebrities now are spoiled pampered brats that could use a good ole tanning.
(0)
Comment
(0)
Show More Comments
Read This Next
RallyPoint Home