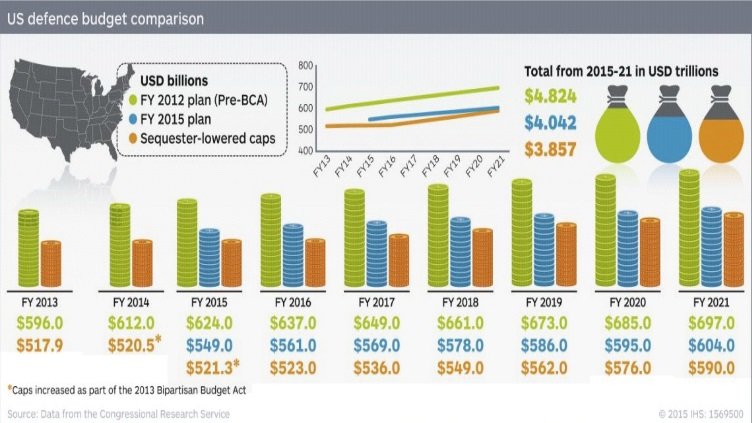 President Barack Obama has threatened to veto defence bills that use supplemental accounts to add funding for defence while allowing domestic programmes to be capped, as Democrats continue to push for a compromise to raise overall budget limits.

A Republican-led effort in the fiscal year 2016 (FY 2016) defence bills seeks to obviate funding limits - mandated by the 2011 Budget Control Act - by adding as much as USD89.2 billion to the non-capped Overseas Contingency Operations (OCO) account, for USD611.9 billion in total national defence funding. In FY 2016 sequestration caps the total national defence budget at USD523 billion.

When asked at the Pentagon on 6 July if he would veto such legislation, Obama did not commit either way, but 'statements of administration policy' have said his advisors would recommend he reject such bills.

"The president will, I have been assured, veto it [the National Defense Authorization Act]," Adam Smith, a Democrat and ranking member of the House Armed Services Committee, told reporters during a 9 July breakfast.

In defending Democrats' resistance to the current authorisation bill - which unlike the appropriations bill does not actually provide funding - Smith said the policy legislation does including budget numbers and in this case uses the OCO account in a way it was not intended to be used. Therefore, he argued, approving that bill would be an endorsement of a budget approach that Democrats strongly oppose.

The OCO account is meant to fund current operations and not basic Pentagon needs. Really, however, Obama and the Democrats' concern is not so much the use of the account but rather that Republicans would use it to raise funding for defence without also raising funding for domestic programmes and without paying for such increases with new 'revenues' (such as taxes).

As the process unfolds, Republican congressmen appear content with Obama vetoing either defence bill, because the onus would then be on the White House to explain why it rejected legislation that authorises and funds its military operations and programmes - and the highly political issue of troops' pay.

For his part, Obama noted at the Pentagon that throughout frequent wrangling over budgets during his administration, "our service members haven't missed a paycheck". In a similar defence, Smith highlighted the 2010 budget process in which most Republicans voted against the authorisation bill for policy reasons (due largely to its repeal of 'Don't Ask, Don't Tell', a gay rights issue).

The authorisation bill could be passed sometime in July, subsequently vetoed, and then likely work would have to re-start in August. The appropriations bill, meanwhile, has stalled in the Senate, which has become standard in the budget process in recent years.

Democrats - as well as Obama's secretary of defence, Ashton Carter - are hoping that their opposition to the OCO funding tactic can push Republicans towards a compromise similar to the 2013 Bipartisan Budget Act that raised the FY 2014 and FY 2015 funding caps.

Democrats appear willing to add defence funding, but they want similar funding added for domestic programmes such as education or infrastructure or want new revenues collect to pay for increases. Ultimately, the Democrats want the government to collect more revenue (something Republicans strongly oppose), and this would surely play a significant role in negotiations.

The Pentagon could, in lieu of a budget compromise, again be funded by a Continuing Resolution, but this is a particularly inefficient funding method because it locks in last year's funding levels and bars new start programmes.

http://www.janes.com/article/52896/pentagon-budget-2016-draws-veto-threats-democratic-opposition
Posted in these groups:

Sgt David G Duchesneau
Posted 7 y ago
Of course he will just to piss them off!
(1)
Comment
(0)

COL (Join to see)
Posted 7 y ago
Ok, this is not the Pentagon's budget and the President can't veto the Pentagon Budget. That's not how it works. To simplify it...significantly...the Pentagon (Department of Defense) submits it's budget to the President. It is part of the President's Budget that gets submitted to congress. That's a "recommendation" of what the President wants to do frmo the executive side of the house. Now...he doesn't control spending...he just makes plans and recommendations. Congress authorizes and apportions (two separate actions in the House and the Senate) funding for the government. That can be different than what the President recommended. If that's the case, he can veto the bills put forth by Congress that pertain to the budget. Those are called the Authorization Bill and the Appropriations Bill. He can tackle either one of those.
(0)
Comment
(0)

SGT Roberto Mendoza-Diaz
Posted 7 y ago
That's a rhetorical question. Yes he will.
(0)
Comment
(0)
Read This Next
RallyPoint Home