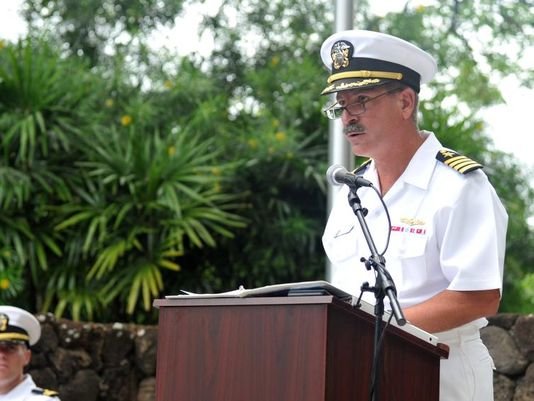 A senior Navy intelligence leader whose provocative comments this year about Chinese bellicosity stirred an international controversy has been shelved in the wake of an investigation into his conduct, Navy Times has learned.

Capt. James Fanell, the director of intelligence and information operations at U.S. Pacific Fleet, has been removed from that position by PACFLT boss Adm. Harry Harris and reassigned within the command, Navy officials confirmed.

Fanell warned during a February public appearance that a recent Chinese amphibious exercise led naval intelligence to assess that China's strategy was to be able to launch a "short, sharp war" with Japan, an unusually frank assessment about a closely watched region.

His comments, which ran counter to the Pentagon's talking points on building ties to the increasingly assertive Chinese navy, were picked up by media outlets from The New York Times and Reuters to London's Financial Times and Daily Telegraph. Top defense officials, including the 4-star head of the Army and the Pentagon spokesman, were forced to respond to his comment in the following days.

PACFLT did not disclose the relief, saying that Fanell was not a commanding officer and therefore was entitled to increased privacy.

"It is inappropriate to publicly discuss the internal reassignment of non-command triad personnel," PACFLT said in an Nov. 7 statement.

Fanell's relief is the latest turmoil in the Navy's intelligence community, and has raised questions about whether an intel officer was cashiered for publicly voicing a view that contradicted Pentagon public statements.

Fanell, 52, declined an interview request for comment through a spokesman.

Fanell leaped into the public spotlight earlier this year when the press picked up on remarks he made at the U.S. Naval Institute's WEST 2014 conference, saying naval intelligence believed that China was preparing for a possible war with Japan.

"[We believe] the [People's Liberation Army] has been given the new task to be able to conduct a short, sharp war to destroy Japanese forces in the East China Sea following with what can only be expected [as] a seizure of the Senkakus or even southern Ryukyu [islands]," Fanell was quoted as saying.

Fanell has also stated that China is at the center of virtually every maritime territorial dispute in the Asia-Pacific and that the Chinese were engaging in a blatant land-grab of islands that would enhance their exclusive economic rights to fishing and natural resources.

"I do not know how Chinese intentions could be more transparent," he said, adding that when Beijing described its activities as the "protection of maritime rights," this was really "a Chinese euphemism for the coerced seizure of coastal rights of China's neighbors," the Financial Times reported.

Fanell's views have supporters inside naval intelligence, and he has become a high-profile spokesman for a more alarmist view of the rise of China than those espoused by Navy senior leadership, an intelligence source who spoke to Navy Times said. Fanell's articles on China have been published by Hoover Digest, Naval Intelligence Professionals Quarterly and the U. S. Naval Institute's Proceedings.

But his public remarks stirred a major controversy and forced both the Pentagon's top spokesman and members of the Joint Chiefs of Staff to repudiate his comments.

Rear Adm. John Kirby told reporters that Fanell's comments were his to express and that they weren't reflective of the organization's stance on China.

"What I can tell you about what [Defense] Secretary [Chuck] Hagel believes is that we all continue to believe that the peaceful, prosperous rise of China is a good thing for the region, for the world," he said.

Coverage of the comments, which broke in early 2014, came at an awkward time, coinciding with Army Chief of Staff Gen. Ray Odierno's trip to Beijing in February, when he was asked by a reporter to respond to Fanell's analysis.

"I've seen no indications of that at all," he said, according to a Reuters report, referring to Fanell's analysis that China was preparing for war with Japan.

The comments also ran contrary to the messaging from Adm. Jon Greenert, who has made engagement with China one of the hallmarks of his time as chief of naval operations.

Later in 2014, Greenert stated that talking openly of war with China — and a Chinese war with Japan would almost certainly trigger a war with the U.S. — was unnecessarily antagonistic.

"If you talk about it openly, you cross the line and unnecessarily antagonize," Greenert said at a forum in Newport, Rhode Island. "You probably have a sense about how much we trade with that country. It's astounding. "

Fanell is a California native and nearly 29-year career intelligence officer commissioned in 1986. He was responsible for damage assessments for Pacific Fleet during operations Desert Storm and Desert Shield.

He served as a China maritime watch officer at Joint Intelligence Center Pacific in 1991, and served on board the carriers Kitty Hawk, Carl Vinson, as well as the amphibious command ship Blue Ridge.

He has been reassigned as an aid to Rear Adm. Randy Crites, head of the maritime headquarters at PACFLT.

http://www.navytimes.com/story/military/2014/11/10/senior-navy-intel-officer-removed-for-controversial-comments-on-china/18789539/
Posted in these groups:

1SG (Join to see)
Edited >1 y ago
Posted >1 y ago
I don't necessarily disagree with his comments! His personal beliefs are his to be shared at appropriate times. However, when speaking in public and as a representative of the Command, it was his duty to speak the Command Stance. Had he made his claims while "not" representing the command, then I would applaud him for his different stance and voicing it.

Many of us probably recall coming back from a Battalion Command and Staff Meeting personnally not liking and disagreeing with a new position or reqirement. When I stood in front of my formation of troops and put the policy out, it was as if it was my policy. I did not come out and say, "Ok folks, this is stupid, I disagree with it, but we have to do it anyway!" Never happened!

Now if/when I was out and maybe having a few beers with my Platoon Sgts/Ploatoon Ldrs, and the subject came up, I had no problem discussing it with them and telling them the truth, but also informed them that my personal thoughts went no further than us and it better stay that way. When you're in position that spotlights the command, you have to be a team memeber, whether you agree or not.

If he was so opposed to the Command's stance (including DOD, & JCS level as well), he should have declined his speaking engagment. He knew beter, he screwed up....and at that level, when you screw it up knowing better, he should have been removed!

I'm not saying I like it, however, reliefs generally are not easy nor taken lightly by Commanders. And in our current politico-military environment....he should have known better. Self Inflicted wounds are just as painful by accident or intentional! Tough one to call!
(11)
Comment
(0)

SGM (Join to see)
>1 y
1SG McPherson you are correct. Like it or not, a senior commissioned officer represents the service; one must be very clear to delineate personal opinions from professional remarks, and then use them only in a specific context if at all. When speaking on matters of intelligence, host nation or our own national sensitivities there is usually a process in place to coordinate talking points. Ironically, we lose some rights while serving our country to protect freedoms, including some of our freedom of speech.
(3)
Reply
(0)

SFC (Join to see)
Posted >1 y ago
He may very well have been correct in his assessment but being counter to the Pentagon is a career killer apparently. :) Politics are a bitch!
(7)
Comment
(0)

SSG Tim Everett
Posted >1 y ago
The guy wasn't speaking his private, personal opinion after solicitation. He was speaking in a public fashion, and should have reflected the unified front of a Command position. Every single one of us knows we have our own personal opinions. Those of us who've served in a leadership position know that if we wish to be professionals, we don't ever undermine command authority by gainsaying their decision when we pass information down to our subordinates and peers.
(6)
Comment
(0)
show previous comments

Cpl Julio Rosa
>1 y
Hell, he was just being American. He said what he felt. Freedom of speech isn't so free, you must remember to use tact.
(1)
Reply
(0)

SSG Tim Everett
>1 y
You don't have the luxury, as a leader of troops, to exercise your freedom of speech. I'm sorry if that rankles anyone but it's absolutely UNSAT to gainsay your command or higher-ups. If you're a squad leader and your platoon leader tells you to do something, you don't go to your boys and say "Okay, that @#!%ing idiot butterbar wants us to go over here and dig fighting positions. I think he's wrong and it's bullcrap, but that's what we have to do."

The same holds true at higher levels, unless you're General Mattis or you're interested in career suicide. In public, you present a unified front and you toe the company line. That's what a team does.
(0)
Reply
(0)

SSgt (Join to see)
>1 y
It is a time when everyone should be afraid of the NSA/IRS getting their hands on private documents and exploiting their use.
(0)
Reply
(0)
Show More Comments
Read This Next
RallyPoint Home