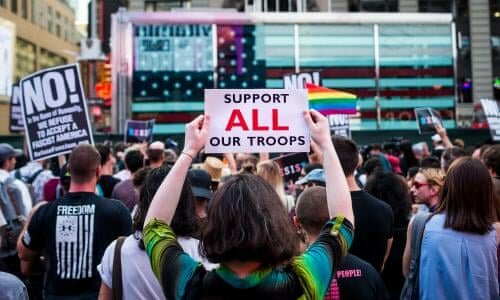 In time for Oct. 11’s National Coming Out Day and the 10-year anniversary of the repeal of the military’s “don’t ask, don’t tell” policy — which for 17 years barred lesbian, gay and bisexual people from openly serving in uniform — the U.S. Department of Veterans Affairs (VA) is inviting public comment on a rules change to make it easier for Veterans harmed by that program to appeal discharge decisions and apply for benefits.

VA opened comments on Sept. 9 for another 30 days on how to structure a new framework for discharges considered “dishonorable.” Anyone can provide input, either in virtual listening sessions on Oct. 5 and 6 or in writing until Oct. 12, 2021.

“Despite serving with extraordinary honor and courage throughout our history, more than 100,000 American service members have been discharged because of their sexual orientation or gender identity — including some 14,000 under don’t ask, don’t tell,” President Joe Biden said in a statement on Sept. 20, 2021. That’s the day 10 years ago that the Don’t Ask Don’t Tell Repeal Act of 2010 (P.L. 111-321) took effect at the Obama administration’s Department of Defense.

VA has already received more than 70 “various and differing comments” on a proposed framework issued July 10, 2020. A new invitation for comment, published in the Federal Register on Sept. 9, 2021, seeks additional information that VA will consider in further updates to the discharge regulations.

More input is sought on topics such as the factors contributing to mental impairment that caused a service member to engage in misconduct, and whether and how VA should revise its proposed definition of moral turpitude.

Aim is to encourage discharge upgrades

Biden noted that many lesbian and gay Veterans received “other than honorable” discharges, which excluded them, and their families, from receiving VA benefits and services.

A VA official said one intention of the regulatory revamp is to encourage these Veterans to apply for discharge upgrades and determine their ability to receive assistance from VA.

Under the proposed guidance, VA adjudicators who determine that service members were separated for solely these issues “are considered ‘Veterans’ who may be eligible for VA benefits.” These include compensation and pension, health care, homeless program services and the home loan guaranty.

Williams added that every “character of discharge” case first considered for denial will get a “second look” before being rejected.

Defense Secretary Lloyd Austin III said in a statement on Sept. 20 that service members who believe they were wrongly discharged or have an error in their service record may contact their military department’s Board for Correction of Military/Naval Records or Discharge Review Board.

The Clinton administration enacted DADT in 1994. Among the thousands of service members discharged under the policy were 55 Arab linguists in the post-9/11 period. This occurred despite the Army telling the then-U.S. General Accounting Office in a report released in 2002 that “greatest number of unfilled human intelligence collector positions was in Arabic.” (The GAO is now called the U.S. Government Accountability Office.)

According to a fact sheet compiled by the Center for American Progress Action Fund, researchers estimate that it costs the federal government anywhere between $10,000 to $37,000 to replace each service member discharged.

“As Secretary of Defense,” Austin said, “I am committed to improving diversity, equity, and inclusion across the force. It makes us more representative of the nation we defend. It makes us wiser. And, without question, it makes us stronger.”

Read statements and VA’s blog regarding DADT from Sept. 20:

VA: News release, https://www.va.gov/opa/pressrel/pressrelease.cfm?id=5720 and blog, https://blogs.va.gov/VAntage/94920.
Read the Sept. 9 request for information, submit a comment or email VA to join a listening session: https://www.regulations.gov/docket/VA-2020-VBA-0018/document.
Posted in these groups:

CPT Lawrence Cable
Posted 2 mo ago
First of all, DADT was not an attempt to ban Homosexuals from serving in the Military, it was an attempt to allow it without going to the problem of actually changing the regulations that prohibited it in the first place. When I enlisted in 1982, two of the questions you had to answer was were you a homosexual and were you a member of any organization that wanted to overthrow the government. While I would have doubts that changing the regulations at the time would have been politically feasible, the concept was stupid from day one. You can join because we aren't going to ask you, but if we find out we are going to punish you and kick you out?
Diversity is a stupid goal for an organization that is supposed to be about teamwork. OTOH, I really don't care about who you sleep with at night as long as you do you job. What we need to be again is Army Green.
(13)
Comment
(0)
show previous comments

For example:
If a service member is deceptive on an SF86 they will most likely not be qualified for a security clearance and they could be subjected to NJP, etc.

I feel that forcing me to socialize with a same sex military couple as though I approve of their moral being is offensive to my religion and everything I know to be true.

I respectfully present this example of how there is harm done with our declining moral footing:

It would be like forcing a Jew or Muslim to eat a bacon sandwich and pretend it was kosher or halal.

SPC Steven Depuy
1 mo
CPT Lawrence Cable when I applied for the Navy first in 76, I was honest and they told me all I could do then was be a truck driver because I admitted I tried them. This was in 76. When I joined the Army then, I just said no.
(0)
Reply
(0)

SFC Casey O'Mally
1 mo
PO1 Mark Koenig No, it would be the same as forcing a Jewish or Muslim Soldier to eat dinner where bacon was served. Not forcing ng them to eat it themselves. And guess what... Jewish and Muslim Soldiers eat in the DFAC all the time. And their religion is fine with it.

I assume that you are Christian, although that may not be true. But if it is...

Christianity is ALSO fine with eating dinner with a gay couple. Christians are supposed to strive to be Christ-like. Christ preferred to eat with the sinners rather than the priests. He also preached to love your neighbors as yourself. He also said that before you worry about the splinter in your brother's eye, first remove the sty from your own.

This isn't about religion, it is about bigotry. Which goes against most religions out there.
(1)
Reply
(0)

CPO Arthur Weinberger
29 d
You are absolutely correct. It was meant to allow these people to serve and hopefully not flaunt or have a coming out party. I have served with gays. They like any others are good and bad. Your sexual orientation should not matter. When you put it in someone's face or try to put the make on someone; we then have a problem.
(1)
Reply
(0)

PO2 Russell Lincoln
Posted 2 mo ago
Sydney Glynn It's about time, I served with several professional military people that had other than hetero orientation.
(10)
Comment
(0)

CPO Arthur Weinberger
Posted 2 mo ago
What the regulations at the time stated should be enforced. If you were not allowed in because of sexual orientation; it should be enforced. We are making to many exclusions. We don't want to hurt someone's feelings. Today we are allowing personal to not receive covid vaccine and others things due to religion. How many exclusions are we going to make? What is the purpose of making a regulation if it is not going to be followed? We have different regulations for the asvab exam. Lower scores if you are a so-called minority. higher for a female. This too is unfair.
(8)
Comment
(0)