Military dogs are termed as mere “equipment” in laws and policies 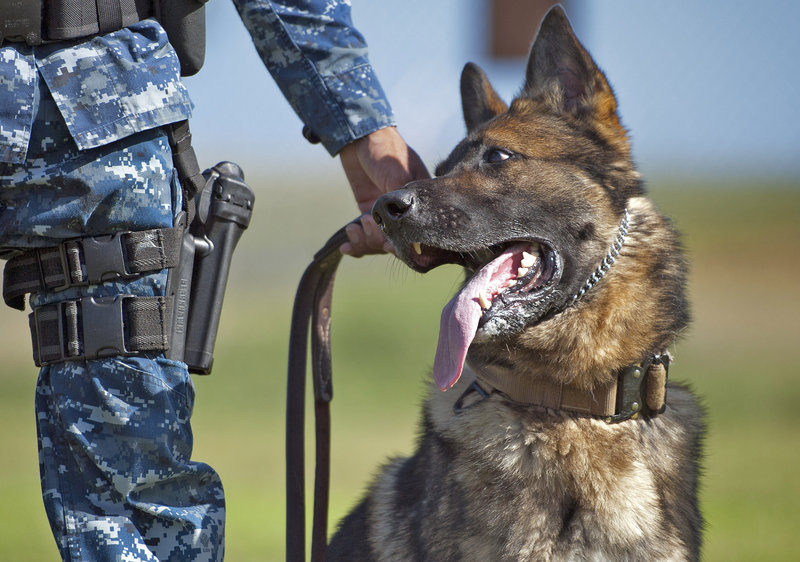 Not only do men and women go through great lengths to serve and protect our country, but dogs do too. However, military dogs are termed as mere “equipment” in laws and policies. Military dogs must be treated as soldiers, especially since their lives are put on the line to save others.

Military Working Dogs (MWD) are specifically trained to sniff bombs, protect their own bases and identify the locations of the enemy. This kind of work is dangerous and traumatic for a living, breathing being. During active service, a dog’s rank is considered higher than its handler’s. However, all of this is put aside once the dog becomes too old or irrelevant. The same dog is then declared unnecessary equipment, which can be left behind--often at foreign bases.

This is wrong. The bond between a dog and its handler is very strong. They are practically comrades. The dog protects its handler and other soldiers during crossfire. You can leave behind equipment, but you can never leave behind a comrade! Military dogs should be reclassified as manpower or K-9 service members. That way, they will return their country with the armed forces. In the Vietnam War, the U.S. military included 4900 dogs, and only 1600 made it back after the war ended.

Military dogs are not left behind in war zones anymore. Bill Clinton passed a law in 2000 that allows civilians, former handlers and law enforcement agencies to adopt retired MWDs. However, this bill didn’t reclassify war dogs. Representative Walter Jones (R-NC) submitted a bill back in 2012 that would reclassify MWDs as K-9 members of the military, called Canine Members of the Armed Forces Act. Unfortunately, in the process of incorporating the bill in the larger National Defense Authorization Act for 2013, a key part of reclassifying military dogs was left out.

The armed forces do respect all MWDs. Service members who are handlers cannot imagine their dogs as equipment and would never intentionally leave them behind. But the moment an MWD retires, it is considered equipment and is not transported back to headquarters. The dogs left behind at a foreign base can be adopted by a U.S. civilian, but the civilian would then have to pay for the monumental shipping costs. This discourages people from adopting war dogs.

The Air Force is making a policy change that would no longer classify MWDs as gear, but changes still need to be made across the services. We are making progress, but it's taking quite some time. MWDs do nothing less than serve our nation and military. They have every right to be reclassified as service members. If the military can transport MWDs overseas, then MWDs should be brought back as well.

What is your experience with dogs in the military? How should they be reflected in laws and military policies?
Posted in these groups:

SGT Steve Oakes
Posted 8 y ago
They serve with us they should go home with us! When they are taking bullets for humans or dragging one of us out of then line of fire when wounded. We do not see a dog but a fellow service member coming to our aid. They should be treated as such when they retire! IMHO.
(37)
Comment
(0)

SSG Brad Shepherd jr
8 y
Damn right they should.Live out their years happily ever after just like we'd like.
(2)
Reply
(0)

SFC William "Bill" Moore
>1 y
They are Service Members, and have a proven track record of being trainable. If required, re-train them, we owe them at least that much. Then give them an easy retirement.
(3)
Reply
(0)

MSgt (Join to see)
Posted >1 y ago
Nobody left behind including our four legged comrades.
(27)
Comment
(0)

Cpl Brett Wagner
>1 y
Don't know about that, but I would love to get one. We have five, yeah I know insane but my wife would get more if I let her.
(5)
Reply
(0)

MSG Reid Stone
>1 y
I/we would take one without a question, especially a Belgian Malinois. Great dogs, we had one for 10 yrs before he died last yr. He was non police/military, family dog with championship lineage and was a wonderful family dog. Let the handlers have them when done with military service if they want them!! That is the least our govt can do for the dog and the handler.
(2)
Reply
(0)

CPO Jon Campbell
Posted 8 y ago
The military policy is at odds with how working dogs are treated in police departments and with how dogs and other military animals have been treated historically. Working dogs in police departments are usually transferred to their handlers upon retirement.
Let a reporter get some video of a dog left behind and see what kind of backlash it creates. Even if it is not a common practice, it only takes one incident to make a PR nightmare.
Animals have always been a part of the military and should always be afforded the proper dignity and respect that is due for their service. It dosen't matter if it is a working dog, a pack mule, or a carrier pigeon, humans have a responsibilty treat these working animals right. It also shouldn't be a partisan political issue.
(20)
Comment
(0)

SGM Erik Marquez
>1 y
Just for clarity sake.. US GOV MWD are not currently left in country ..... have not been since vietnam era.

There have been reports of contractors leaving dogs behinds....and while wrong... unless the contract is written as such they MUST return dogs to the country of origin... it is what it is.
(1)
Reply
(0)
Show More Comments
Read This Next
RallyPoint Home