My Amazon Story as a former Army Captain: Leading a service-driven life & embarking on my dream career supporting Vets at Amazon 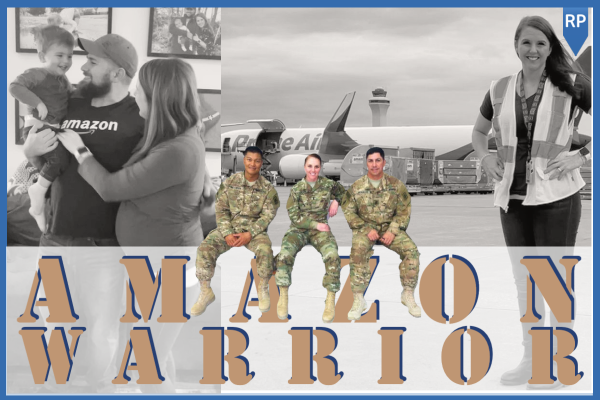 When I decided to enlist, military service wasn’t a strong tradition in my family — my grandfather served during World War II and two of my cousins had just begun their military careers.

I didn’t consider entering the military until I got to college, and found myself doing poorly and lacking direction. That changed after I traveled to China and South Korea on a university-sponsored trip. Until then, my experiences had been limited to the small town in Ohio where I grew up. Seeing more of the world made me realize I wanted to contribute to something greater than myself.

I enlisted in the Army one month after I returned and was in basic training one month later. Able to serve in the National Guard while I finished my degree, I later commissioned as a logistics officer on active duty and was stationed at Fort Knox, where I met my husband my first day on the job. I eventually transferred to Fort Bragg in North Carolina.

My eight-plus years in the military exposed me to more of the world and, especially during times of adversity, taught me that I had an instinct for leadership and an ability to think critically in stressful situations.

I discovered this the hard way while forward-deployed, after my company commander was fired. I was tapped to lead a 130-soldier unit, a rarity for someone still ranked lieutenant. I assumed control of a hostile work environment and a company with low morale, a potentially dangerous situation given the work we were doing in a foreign country. I had to get the soldiers and their families safely back to the United States, along with sensitive items and equipment from two areas of operation.

I focused on motivation and morale. I led with honesty. I spoke with soldiers face to face, learning their struggles. I held holiday events to bring a sense of cheer and goodwill. I sought out other leaders for advice and to build my confidence. With a shift in the dynamic, we redeployed safely, with no injuries or accidents. This was the first instance where I truly gained confidence in myself as a leader.

I rose through ranks to captain, supervising and training hundreds of soldiers and overseeing the welfare of military families. By 2020, I had achieved my formal military goals and decided to transition out with my husband, just before the birth of our first child.

With my background in public administration, nonprofit management, and suicide prevention advocacy and education, my first choice was work for a nonprofit or in the public sector. Around the time my husband decided to go to flight school, I simultaneously received an offer letter for Amazon’s Military Pathways program and decided to take the leap into this challenging leadership opportunity. This accelerated program for former military personnel would put me on track to general manager within five years. I was promoted within 12 months to senior operations manager and moved to Amazon Air as a site leader for an Air hub in Northern Kentucky.

As a female leader at Amazon, I received genuine support and camaraderie from supervisors and colleagues alike. As a working mom, I jumped back with ease after 14 weeks of maternity leave, used Amazon’s ample pumping rooms and accessed discounted child care.

And once I was hired and doing well at Amazon, I found that it’s a place that wants to maximize the talents of former military personnel and leaders like me. Although I enjoyed the large-scale leadership opportunities within operations, I realized after my son was born that I wanted to get back to doing something I was passionate about, and where I could give back. I began to network from within to get where I wanted to go.

That eventually led me to my dream position on Amazon’s Global Military Affairs team, giving back to former service members as senior manager for Program Honor. In this community-facing role, my team is responsible for external community engagement and strategic relationships with Veteran nonprofits. We direct philanthropic engagement and giving for Veteran/military mental health and suicide prevention, disabled Veteran support, and Veteran homelessness and food insecurity.

For example, Program Honor worked alongside Amazon Web Services to bring RallyPoint the Machine Learning technology that, through a specific algorithm, can detect a user’s potential suicide risks and prompt them with resources. Program Honor is one of three pillars within Global Military Affairs that is addressing the needs of Veterans around the world in other key areas such as talent acquisition, workforce development, military spouse support and global programs.

I bring to the job my perspective as one of the more than 5,000 U.S.-based Amazon employees representing the military, and an eagerness to help us reach our goal of hiring 100,000 more Veterans and military spouses by 2024. I also contribute time to Amazon’s military affinity group, Warriors@ Amazon, and serve as a networking resource for other Veterans online and offline.

I’m particularly proud of one event last year where I was able to see our organization’s impact firsthand, when the LEX1 Warriors@Amazon Chapter organized goods totaling $20,000 to create “move-in bags” that were donated to the Veterans at the Lexington, Kentucky, Veterans Affairs Hospital, an event I’m happy to say occurred again this year.

I’m often asked by others in the military or Veteran community for advice in making the transition to a civilian career at Amazon or elsewhere. Here are a few tips I offer:

Start networking. Update your LinkedIn profile for the role you’re interested in, and look for Veterans working in those positions who you can talk to about their role and experiences. Not only could this open the door to a position within their organization, but it helps you understand what you want to do when you leave the military. I networked with many former “battle buddies” working for Amazon and conducted an extensive amount of informational interviews to ensure this was the right choice for me.
You also don’t have to settle for the first job that opens — take the career path that’s best for you.

Do an internship. Before you leave the military, try to gain private-sector experience in an internship. I learned valuable skills in grant writing, marketing and more working for the Lexington, Kentucky, mayor for three months before I left the military. I highly recommend this experience to other service members.

Submit your resume to an Amazon employee. If you know a military spouse or Veteran who already works at Amazon, feel free to give one of us your resume to pass along. Also, ask for feedback on the role you are applying for to make sure it aligns with your experiences.

Stay in touch with recruiters. Military recruiters are invested in the retention and growth of our Veterans — their involvement in your career and their desire to see you move up within the company doesn’t stop after you sign your offer letter. I’ve remained connected with my recruiter, Tereh Sayles, throughout my time at Amazon, and she is the first to offer advice or provide me with the best contacts to enhance my career. All the military recruiting and support teams at Amazon provide the same support.

Are you a Warrior in Transition? See if a career at Amazon works for you.

Read about Amazon’s pledge to hire 100,000 Veterans and military spouses by 2024: https://www.aboutamazon.com/news/workplace/amazon-will-hire-100-000-veterans-and-military-spouses-by-2024.

Discover more about Amazon: https://www.aboutamazon.com.
Posted in these groups:

SGT (Join to see)
Posted 5 mo ago
CPT Charlotte La Belle Thank you for sharing your "life experiences". You are to be commended for your committment & determination in whatever situation you placed yourself in... notice I said "placed"... not "found". There is one paragraph that stuck out with me that I think was key to your success;

"I focused on motivation and morale. I led with honesty. I spoke with soldiers face to face, learning their struggles. I held holiday events to bring a sense of cheer and goodwill. I sought out other leaders for advice and to build my confidence. With a shift in the dynamic, we redeployed safely, with no injuries or accidents. This was the first instance where I truly gained confidence in myself as a leader."

You honesty, concern for others, & willingness to listen to leaders is a relection of you're character. Best of luck to you & your family!
(5)
Comment
(0) 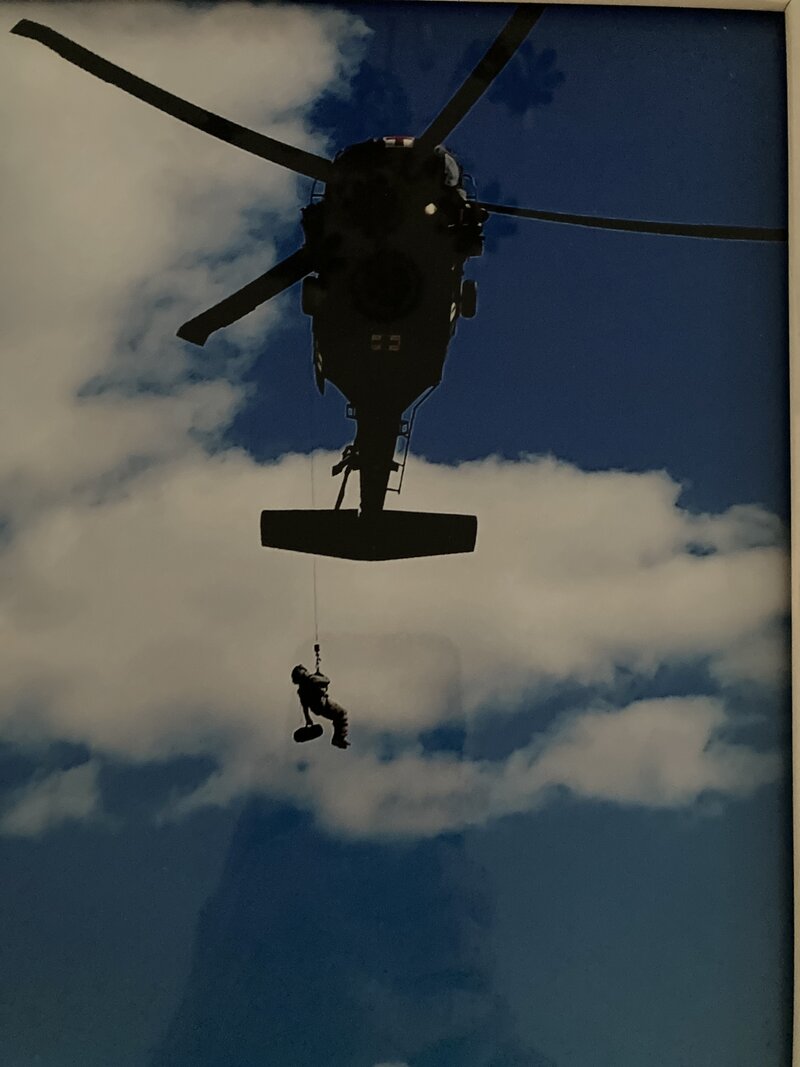