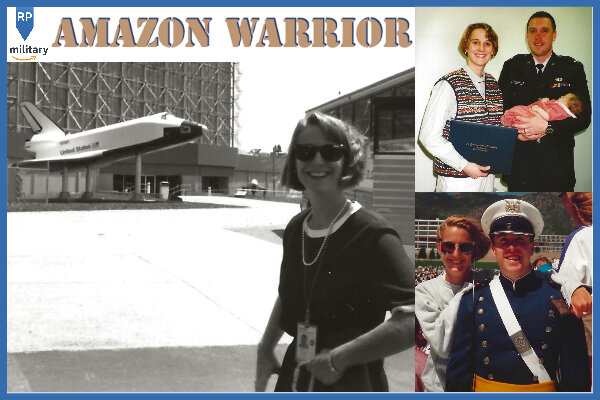 From Tractors to the Talk of the Town

Why would someone give up financial security and a well-mapped career trajectory? Ask my parents and they’d probably say “it better not be for a boy!” Alas, it was indeed, about a boy. Choosing to leave my job at John Deere, and my home in Ottumwa, IA
made me a bit of a celebrity amongst the locals. I was in love with a man who recently graduated from the Air Force Academy and we decided to get married. If we wanted to be together, I needed to pack a bag and be ready for the ride of a lifetime.

Being a military spouse is not an easy job. In addition to the frequent relocations making establishing a career a challenge, you also have to make new friends and support your family as they adjust to the new normal. Away from family, in a new town or even country; when I was in the thick of it all, I yearned for more resources to help make me and my career feel important. Yes, I was a spouse, but I was also a woman trying to get ahead. As I looked around, I saw so many spouses that had given up their professional pursuit. I understood, our plates were full with managing the homefront for our service members. I felt alone in my crusade to be a career spouse.

It took some out-of-the-box thinking and tenacity to pursue my dreams when my husband was in the service. One of those dreams was to work for NASA. I literally placed a cold call to the space agency figuring I had nothing to lose and everything to gain. In the past year, “working from home” has become commonplace but in 1991 when I joined NASA, I was one of its first remote employees. That job wasn’t handed to me, I made the dream a reality by advocating for myself and explaining the limitations with regard to geographical location and highlighting my strengths and unique perspective.

The military has a myriad of support options for spouses. There are family readiness groups which connect spouses and establish a network of people experiencing all the nuances associated with marrying the military. The VA has morale and welfare resources. A quick Google search will reveal hundreds of organizations committed to making the lifestyle easier to navigate, most of which didn’t exist when I was coming up through the ranks with my husband. Finding like-minded individuals interested in pursuing their dreams in addition to being a military spouse was an anomaly. Now, it seems the times are changing.

Having worked for monoliths such as NASA, Cisco and ADP, Amazon seemed like a great opportunity to try something new. My first position was as Capture Manager for Higher Ed. AWS doesn’t typically respond to RFP’s but when Arizona State University issued one, "I was tasked with pulling all the required teams together to quickly respond to the opportunity." While my husband was no longer active duty, my daughter was a student at the Air Force Academy and graduated at the time that AWS was awarded the contract with ASU.

After guaranteeing a procurement pathway for ASU to utilize AWS, I moved into my current role as Partner Development Manager. Working for AWS, in a sense, feels like coming home. The parallels between being a military spouse and an AWS employee abound. Flexibility, adaptability, multi-tasking, building a network of support and the lack of a comfort zone are just a few of the ways my two careers have mirrored one another.

Amazon made a commitment to hire 100,000 veterans and military spouses by 2024. Why were spouses included in that goal? Because Amazon knows that we possess unique qualities that aren’t often found in the civilian world. Don’t let your dreams fall by the wayside, carve out your career with willing partners like AWS who WANT to help you succeed. Those resources I so craved after leaving the safety net of John Deere...Amazon has them. There is literally something for everyone. Search the job postings, take the tests, crush your interview. Don’t get overwhelmed by the process, use it to find the exact fit for you. Working with a company that values you as a career spouse is the first step in achieving your dreams.

Are you a Warrior or spouse in Transition? See if a career at Amazon works for you!

Search and apply for more than 38,000 open positions based in the United States: https://www.amazon.jobs/en/military.

Discover more about Amazon here: https://www.aboutamazon.com.
Posted in these groups:

SSG Roger Ayscue
Posted 12 mo ago
Outstanding story of love and support.
My Spouse is the daughter of a career Air Force officer and she herself is an Army Vet. The toughest job in the service is the Military Spouse. To serve as a Spouse with honor and dedication takes a special person. My wife certainly is.
Thank You for telling of your service.
(6)
Comment
(0)

SPC Margaret Higgins
Posted 11 mo ago
Hallie Patterson Ma'am, I thank you so very kindly for your post.
(5)
Comment
(0)

CPT David Gowel
Posted 12 mo ago
So Hallie Patterson, let me get this straight: you cold-called NASA and got them to hire you?! After I let that marinate for a moment, from my experience, that 1) makes you a rockstar and also 2) pretty much sums up the type of "get it done" mentality I've seen many times from military spouses. As a mil spouse, you've accepted a life of sacrifice and service to your country, but have probably been "thanked for that service" far fewer times than your spouse who wore the uniform. Thanks for sharing your story. I'm sure your path to success will be helpful to many other spouses who are overwhelmed with the career challenges that currently seem daunting.
(5)
Comment
(0)
Read This Next
RallyPoint Home