On 76th anniversary of D-Day, another global crisis may unite generations in National Guard service 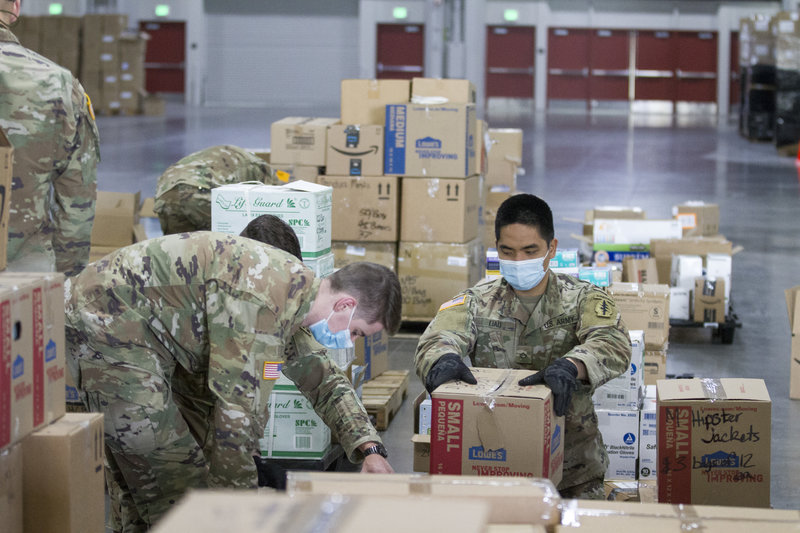 In 1989, as a young member of the National Guard, I was honored to travel with the Maryland Army National Guard Band to the Normandy American Cemetery and Memorial at Colleville-sur-Mer to listen as then Commander in Chief of Forces Command Colin Powell marked the 45th anniversary of D-Day.

After walking the hallowed sands of the main Omaha beach landing site, I spoke to a surviving veteran of Virginia’s 116th Regimental Combat Team, part of the 29th Infantry Division. Many of his fellow National Guardsmen were killed before reaching “Bloody Omaha” beach on June 6, 1944. The former soldier described through tears the harrowing scenes of carnage he saw. He relayed not the glory of war, but what weapons of war did to his young comrades.

I was also struck by what his wife told me later: This D-Day hero had never before shared his account of that day. I was proud that this veteran, old enough to be my father, could share his experience with me, representing the next generation of guardsman.

Now, as we arrive at the 76th D-Day anniversary and honor our World War II veterans — the less than 400,000 still living and 16 million now dead — we face another global crisis in the novel coronavirus pandemic. Although these historical situations are not the same, the health crisis has also caused misery worldwide: Nearly 400,000 deaths overall, including 107,000 dead in the United States, according to early June data from John Hopkins University.

As we look for bright stories in this grim chapter, we can find them in the young women and men of the National Guard, who are working to fight the pandemic in so many ways. As of June 1, about 45,000 National Guard members are activated for COVID-19 response in all 50 states, three territories and the District of Columbia, according to a National Guard Bureau news release. Here is a snapshot of ways they are serving, as tracked by the bureau:

• In hard-hit New York, where more than 30,000 people have died of COVID-19, the National Guard is assisting with the state’s overwhelmed mortuary services.

• In New Mexico, the National Guard is transporting test specimens and assisting the Pueblo and Navajo nations with cleaning long-term care facilities, distributing food and water and supporting test sites.

• In Oklahoma, the National Guard has delivered 300,000 pounds of food and handed out 65,000 meals in the eastern part of the state.

• In Puerto Rico, the National Guard is conducting coronavirus screening at ports of entry, testing first responders at 10 locations and testing older people at sites around the island.

Should you enlist in the National Guard?

More such stories abound in every state, from coast to coast. As these heroic acts gain notice, they may be sparking interest in National Guard service, perhaps similar to the way the events of Sept. 11, 2001, led to a modest increase military service in that generation.

According to a May 18, 2020, report by The American Homefront Project, National Guard offices in Colorado and Maryland reported a spike in website and social media traffic, and Arizona and California saw an increase in National Guard applicants.

• Do your research. Review online all the information about National Guard service, including how to study for the Armed Services Vocational Aptitude Battery test; what it’s like to go through the Military Entrance Processing Station, which determines applicants’ qualifications to serve; and what to expect in basic training. Do this research before meeting with recruiters, who can answer additional questions, he said.

• Understand your service goals. Everyone has different motivations for serving, including dedication to patriotic ideals and/or practical reasons, such as accessing education and other benefits, learning a skill and training for a career. Make your enlistment decision easier by identifying your reason or reasons for service.

• Be flexible. You may enlist with one specific job or assignment in mind. But Maldonado said all of National Guard opportunities come with education and income benefits and provide valuable skills. Talk to recruiters about all your options to make the best decision for you and your family.

As another D-Day anniversary comes and goes amid an epic public health crisis, could we see another wave of young people and new recruits elect to fight it through service in the National Guard? Time will tell.

John Goheen is an Army National Guard veteran and director of communications for the National Guard Association of the United States in Washington, D.C. He previously served on active duty as public affairs officer for the National Guard Bureau and at the Maryland Department of the Environment. He enlisted as an Army journalist in 1997, joined the Maryland Army National Guard in 1982, earned his commission in 1987 and retired in 2000. He toured then-West Germany from 1979 to 1982; served on a media-escort mission to Saudi Arabia during Operation Desert Shield in 1990; and deployed to Bosnia in 1995.
Posted in these groups:

Lt Col Charlie Brown
Posted >1 y ago
Thank you for your service. I wish what you (the guard) do was more appreciated.
(10)
Comment
(0)

MSgt Neil Greenfield
Posted >1 y ago
I was in the DC Air Guard, NC Air Guard, and retired out of the OH Air Guard. My service then and my Army service before that are never far from my thoughts, especially because of days like this date and watching and reading about National Guard Soldiers and Airmen being called up.
(9)
Comment
(0)

SGT David A. 'Cowboy' Groth
Posted >1 y ago
Great share sir, I went IRR after 24 years with the MIARNG, it was a great experience, and I had several great times while in, thank you for your service sir.
(5)
Comment
(0)
Show More Comments
Read This Next
RallyPoint Home