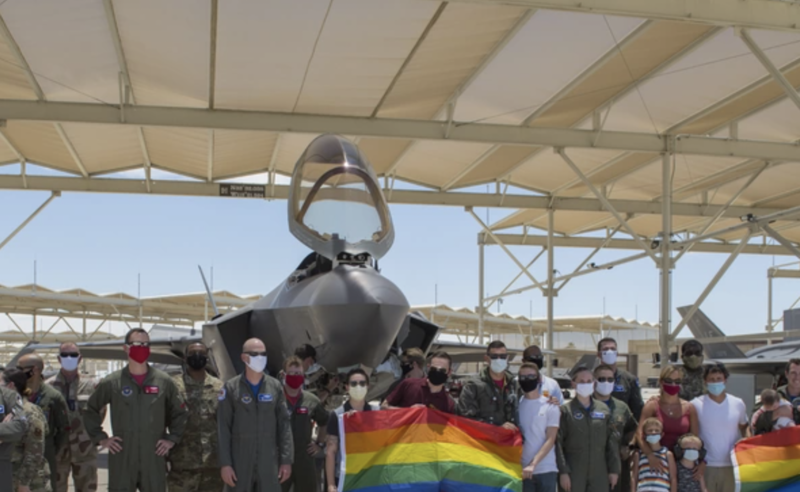 It’s been nine years since the U.S. Supreme Court struck down the federal Defense of Marriage Act (DOMA), which among other expansions of gay rights, enabled same-sex spouses of military Veterans to obtain the federal benefits they’d earned. And it’s been seven years since the high court ruled in Obergefell v. Hodges that same-sex marriage is a fundamental right in the United States.

The U.S. Department of Veterans Affairs (VA) abided by those rulings in granting benefits and services to eligible Veterans and their spouses in same-sex marriages, including surviving spouses. However, VA law to this day defines a Veteran spouse as “a person of the opposite sex who is a wife or a husband.”

That needs to change so that VA’s guiding statute reflects the current law of the land, according to a group of House lawmakers and Veterans’ service and advocacy organizations representing families of the fallen and minority members of the military.

The Supporting All Veteran Families Act (H.R. 6849), a bill introduced in the House this spring by Democratic Reps. Marie Newman of Illinois, Mondaire Jones of New York and Kaialiʻi Kahele of Hawaii, would do exactly that. The measure would formally recognize lesbian, gay, bisexual, transgender, queer and/or questioning Americans and same-sex couples under VA’s marriage law for spouses or surviving spouses of Veterans.

“As public leaders in our nation, each of us has a moral obligation to ensure that all LGBTQ+ Veterans and their families receive the hard-earned benefits they deserve for protecting us and serving our country honorably,” Newman said in the March 3 news release. “The time to remove this discriminatory language is long overdue, which is why I am proud to partner with my colleagues on this critical legislation that will clarify that supporting LGBTQ+ Veterans and their families is the official, written policy of the VA.”

New uncertainty about the security of constitutional rights

Since Obergefell, VA has made clear in policy directives that same-sex Veteran couples and their children are eligible to receive spousal benefits. On forms, references to “husband” and “wife” now refer to a “spouse” instead. VA encourages the roughly 1 million LGBT Veterans in the United States to apply for benefits and services, and to tap into LGBT Veteran Care Coordinators positioned at every VA health care facility (https://news.va.gov/89602/vba-celebrates-veterans-pride-month).

As Pride Month celebrations take place this month, some also worry about percolating legal threats to marriage equality rights and to other constitutional protections many Americans may have considered secure. That’s due to a recently leaked Supreme Court draft opinion indicating that a majority of the justices could vote this summer to overturn Roe v. Wade, the nearly 50-year-old precedent holding that the U.S. Constitution protects a woman’s right to an abortion.

Even though opinion polls matter little in swaying the way the Supreme Court rules, a Gallup poll released on June 1 found that an all-time-high of 71% of Americans support same-sex marriage. (Just 27% of Americans supported this right when Gallup asked this question in 1996, according to the pollster.) Similarly, a Gallup poll from June 2 found that 63% of Americans said they thought overturning Roe and allowing each state to decide whether to allow, restrict or ban abortion would be a “bad thing,” the pollster said.

Among the groups joining the House lawmakers’ statement in support of H.R. 6849, which would expand VA’s definition of marriage to recognize all same-sex couples, is the Tragedy Assistance Program for Survivors (TAPS), a nonprofit VSO. TAPS has since 1994 operated programs here and abroad for adult and youth survivors of the death of a military or Veteran loved one. Last year the group made supportive connections with more than 9,000 newly bereaved family members.

Bonnie Carroll, the organization’s president and founder, said in the news release that the “hold yourself out to be married” clause in the VA law is “archaic,” and it can wind up causing “many surviving spouses to live in fear of losing their survivor benefits when moving forward in their lives.”

That’s because so many VA benefits and services — education, health care, home loans, pensions and more — are tied to a Veteran’s marital status, including a Veteran’s “spouse” or “surviving spouse.”

Lindsay Church, executive director of Minority Veterans of American, added in the statement that it is “beyond time” that the law is updated, noting that “LGBTQ Americans have been serving in our military throughout history, often sacrificing their rights and identities to do so.”

H.R. 6849 is pending before the House Committee on Veterans’ Affairs Subcommittee on Disability Assistance and Memorial Affairs.

Read more about VA benefits and services for LGBT Veterans at https://news.va.gov/89602/vba-celebrates-veterans-pride-month

Read the news release on H.R. 6849 at https://newman.house.gov/posts/reps-newman-jones-kahele-introduce-bill-to-recognize-same-sex-marriages-under-veteran-affairs-marriage-laws

My sister goes to church every week and is fighting breast cancer. Don’t you DARE try to judge her you miserable piece of shit.

That’s the problem with you asshats. You’ve created a god in your own petty, vicious image where all things are righteous because you assume that bad things happen to other people because they’ve wronged god but they happen to you because you’re such a paragon of virtue that you’d be a notch in satan’s belt.

The whole damn scam is just a way to control your daughters and hold yourselves above others.

You desperately need it to be real to justify your assholery.
(2)
Reply
(0)

Some people need to be called names. Get back what you put into the world.
(2)
Reply
(0)

SGT (Join to see)
Posted 19 d ago
All should be treated equally.
(9)
Comment
(0)
show previous comments

SFC (Join to see)
13 d
Sgt James Dare you’re one of those “we’re the only ones who get to heaven” Baptists aren’t you?

Hell would be listening to you. Your last post reveals you to be a cult within a cult, as many of your fellow Rallypointers who might nominally be on your side will be shocked to know they’re not Christians in your eyes.

A real man of god would not be looking to exclude people over minutiae.

Jsut be honest, you’d have me burned at the stake if you could. Just for thinking that people, humans, citizens of the United States, have the right to be free of your pathetic, sniveling fuckery.

My biggest complaint about you godbothering types is you’re never quite honest about how you feel. Your mouth is full of repent and be saved but your shriveled little spiteful heart dreams of being god’s “righteous” wrath on earth. You’re too old to be a school shooter so what’s your play, preacher man?
(3)
Reply
(0)

Sgt James Dare
13 d
SFC (Join to see) - Your hate filled heart is evidenced by your hate filled rant. You are a miserable vile soul. That is sad. You are missing out on the real joy of life. You, a pervert sodomite, are missing out on the real joys of life. Why? Because you have purposely rejected God and His program. REPENT. Sadly you are probably already a reprobate. I hope that is not the case...
REPENT while you can. God can and will give you a clean mind and a clean heart that will bring joy instead of turmoil, hatred and perversion.
(0)
Reply
(0)

Erika Fitzpatrick
18 d
Thanks. Will adjust the headline. Appreciate it.
(0)
Reply
(0)
Show More Comments
Read This Next
RallyPoint Home