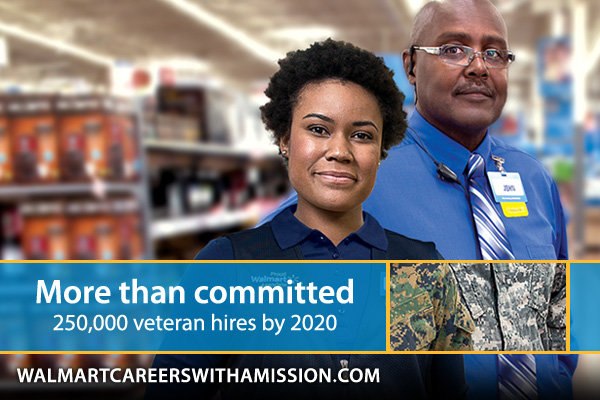 Walmart is changing the face of veteran employment. Here’s why!:
--
The Office of the Chairman of the Joint Chiefs of Staff estimates that 250,000 service members may separate from the military per year over the next five years. This means, the need for America’s leading businesses to contribute to their transition will continue to grow in importance.

Veterans represent one of the largest, diverse, talent-rich pools in the world and are an essential segment of the next generation of workforce. Throughout our country’s history, veterans have played an important role in revitalizing our economy – think of the roaring 20’s after World War I and the long economic boom following World War II.

Too many service men and women who fought for us abroad find themselves having to fight for a job when they return home. What if American businesses focused even more on helping make sure our veterans returned to a land of possibilities?

U.S. Army Captain Sam Walton founded Walmart over 50 years, and, from that humble beginning, our relationship with veterans and military families has grown and strengthened.

Hiring a veteran can be one of the best business decisions you can make. Veterans have a record of performance under pressure. They’re quick learners, and they’re team players. These are leaders with discipline, training, and a passion for service. Walmart is already the largest private employer of veterans in the country – and they want to hire more.

Since the launch of Walmart’s Veterans Welcome Home Commitment on Memorial Day 2013, they have experienced a tremendous response, and as more service members’ transition from active duty, they know they can do more. Recently, Walmart announced their next step by guaranteeing a job offer to any eligible U.S. veteran honorably discharged from active duty since the Commitment’s original launch on Memorial Day 2013 - previously it was for veterans within 12 months off active duty.

In addition to the Veterans Welcome Home Commitment, Walmart is expanding its 2013 projection of hiring 100,000 veterans by 2018, increasing the projection to 250,000 veterans by the end of 2020. Since Memorial Day 2013, Walmart has hired more than 92,000 veterans, and nearly 8,000 have already been promoted to jobs with higher pay and greater responsibility.

In 2011, Walmart and the Walmart Foundation committed $20 million by 2015 to support veterans and their families with assistance from programs that provide job training, transition help and education. After delivering on this commitment in 2014 (one year ahead of schedule), Walmart and the Walmart Foundation renewed their commitment, announcing an additional $20 million through 2019 to support veteran job training, education and innovative public/private community-based initiatives that address the challenges many of our veterans face when returning to the civilian workforce and their communities.

At Walmart, it is their duty and honor to support our men and women in uniform not only when they are on the battlefield, but also when they return home and transition into civilian life. The company is grateful for the sacrifice our nation’s veterans and their families have made in service to our country, and are honored to have the opportunity to employ them, to learn from them, and to support them and their families in every way possible.

Learn more at: http://rly.pt/walmart-career
Posted in these groups:

CPT Aaron Kletzing
Posted >1 y ago
I know several veterans and retirees who have worked at Walmart in various in-store and HQ roles and they all had really positive things to say about it. Some people assume incorrect things about what it may be like to work there...but there are a ton of diverse positive challenges to discover if you give this company a look. It's worth a serious look!
(3)
Comment
(0)

Capt Brandon Charters
Posted >1 y ago
The most impressive takeaway for me is seeing that Walmart has already promoted 8K veterans who were hired since May of last year. Shows me they are really being proactive about veteran career progression.
(3)
Comment
(0)

SGT Steve Oakes
Edited >1 y ago
Posted >1 y ago
I received the message below telling me of Walmart's commitment to hire RECENT veterans. I guess if you got out before Memorial Day 2013 you are not a true veteran?
I would rather panhandle on the streets ( most likely making more money) then work for a company with thier track record. I do not know why Rallypoint has decided to partner with a company that has so many well documented cases of employee abuse.


RallyPoint partners with institutions that seek to serve the military community. The following is a message from our sponsors:
Steve,

YOUR SKILLS, PRIDE AND PASSION HAVE A HOME AT WALMART.

On Memorial Day 2013, Walmart launched their Veterans Welcome Home Commitment. Since then, more than 92,000 new veterans have been hired at a Walmart or Sam’s Club. This Memorial Day, they have expanded their eligibility requirements to all applicants that have been honorably discharged since Memorial Day 2013. Veterans who were discharged prior to Memorial Day 2013 are not eligible for priority status, but will be highly valued candidates based on their training and experience.

My thoughts are that they have misused as many of the regular civilian workforce as they can and now they need a new source of labor. I don't shop at Walmart and I would sure not work there.
(1)
Reply
(0)
Show More Comments
Read This Next
RallyPoint Home