"Patrick Henry Brady (born October 1, 1936), is a retired United States Army major general. While serving as a helicopter pilot in the Vietnam War, he received the Medal of Honor, the nation's highest military decoration for valor.

Brady attended O'Dea High School[1] in Seattle, Washington, an all-boys school run by the Congregation of Christian Brothers, where he was active in sports.

While in college at Seattle University, he initially hated the compulsory ROTC program and was kicked out.[2] Brady realized he would probably be drafted after graduation and reentered the ROTC program in order to enter military service as an officer. After graduation, he was commissioned a Second Lieutenant in the Army Medical Service Corps On March 20, 1959. On April 4, 1959, he went on active duty. He served in Berlin (Germany), from September 1959 to August 1961, with the 6th Infantry Brigade. In August 1961, he became the Motor Pool Officer of the hospital in the 279th Station Hospital in Berlin. He became the Detachment Commander in June 1962 until October 1962. In December 1963, he graduated from the United States Army Aviation School at Fort Rucker, Alabama.[3]In January 1964, he deployed to Vietnam.

During his first tour in Vietnam, from January 1964 to January 1965, then-Captain Brady served as a Dust Off pilot with the 57th Medical Detachment (Helicopter Ambulance), where his commanding officer was the legendary Major Charles Kelly. After Kelly's death on July 1, 1964, Brady took command of Detachment A, 57th Medical Detachment, at Sóc Trăng. The following day, a Commander tossed the bullet that killed Kelly on Brady's desk in front of Captain Brady and asked if they were going to stop flying so aggressively. Brady picked up the bullet and replied, "we are going to keep flying exactly the way Kelly taught us to fly, without hesitation, anytime, anywhere."[4]

On his second tour of duty in Vietnam, 1967 to 68, Brady, now a Major, was second in command of the 54th Medical Detachment.[5] It was during this second tour in Vietnam that Brady was awarded the Medal of Honor.

Brady flew over 2,000 combat missions and evacuated more than 5000 wounded during his two tours of duty in South Vietnam.[1]

Brady retired from the US Army as a Major General on September 1, 1993 after 34 years of service.

For conspicuous gallantry and intrepidity in action at the risk of his life above and beyond the call of duty, Maj. BRADY distinguished himself while serving in the Republic of Vietnam commanding a UH-1H ambulance helicopter, volunteered to rescue wounded men from a site in enemy held territory which was reported to be heavily defended and to be blanketed by fog. To reach the site he descended through heavy fog and smoke and hovered slowly along a valley trail, turning his ship sideward to blow away the fog with the backwash from his rotor blades. Despite the unchallenged, close-range enemy fire, he found the dangerously small site, where he successfully landed and evacuated 2 badly wounded South Vietnamese soldiers. He was then called to another area completely covered by dense fog where American casualties lay only 50 meters from the enemy. Two aircraft had previously been shot down and others had made unsuccessful attempts to reach this site earlier in the day. With unmatched skill and extraordinary courage, Maj. BRADY made 4 flights to this embattled landing zone and successfully rescued all the wounded. On his third mission of the day Maj. Brady once again landed at a site surrounded by the enemy. The friendly ground force, pinned down by enemy fire, had been unable to reach and secure the landing zone. Although his aircraft had been badly damaged and his controls partially shot away during his initial entry into this area, he returned minutes later and rescued the remaining injured. Shortly thereafter, obtaining a replacement aircraft, Maj. BRADY was requested to land in an enemy minefield where a platoon of American soldiers was trapped. A mine detonated near his helicopter, wounding 2 crew members and damaging his ship. In spite of this, he managed to fly 6 severely injured patients to medical aid. Throughout that day Maj. BRADY utilized 3 helicopters to evacuate a total of 51 seriously wounded men, many of whom would have perished without prompt medical treatment. Maj. BRADY'S bravery was in the highest traditions of the military service and reflects great credit upon himself and the U.S. Army. " 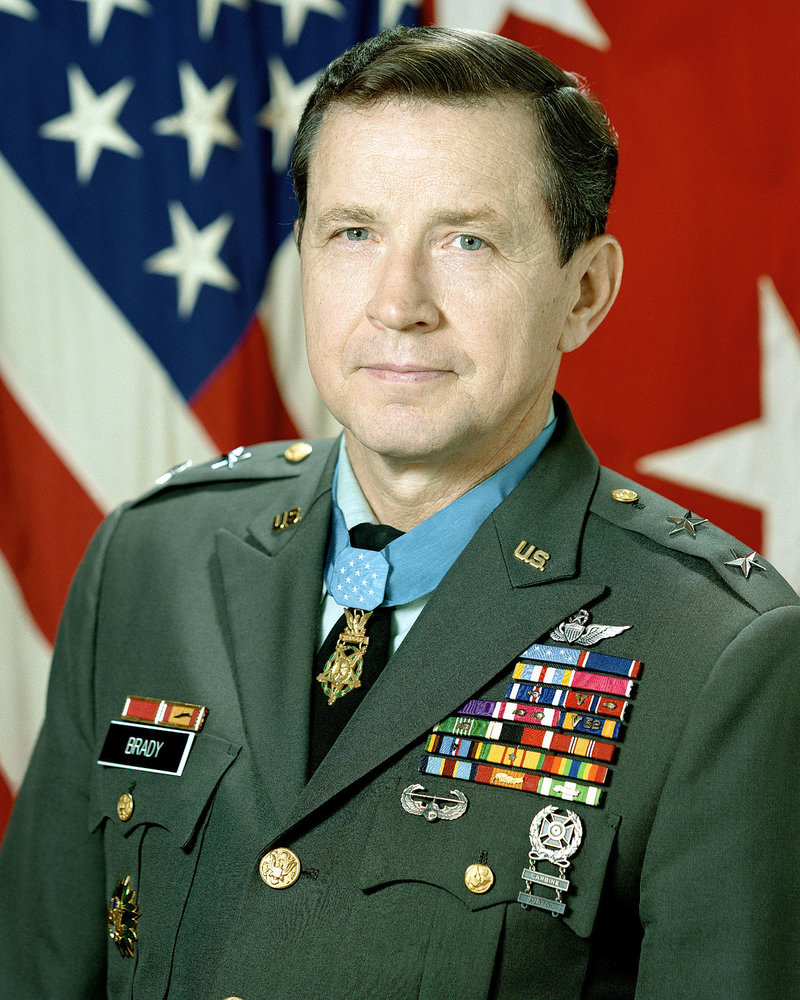