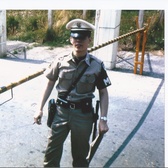 5 Endorsements
I worked on the Security Alert Team and the Backup Alert Force. I worked Commander Of Relief at the entry control point gate to the Nuclear Weapons exclusion zone. I recorded authorized persons and vehicles entering and exiting the exclusion zone in duty log. I issued photo ID badges and observed the exclusion zone alarm board for intrusion alerts.

Certificate of Honorable Discharge from the Armed Forces of the United States of America.

Certificate of Appreciation for Service in the Armed Forces of the United States. President Richard Nixon, Commander in Chief.