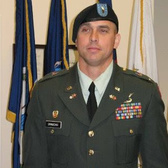 Deployed as a UH-60 Blackhawk crewchief/mechanic with the 1-147th AVN BN. Flew 120 hours of immanent danger zone flight in all mission profiles, to include lower level, day and night vision goggles within a 10 kilometer buffer zone of the Iraq border in a desert environment. Maintained ACFT resulting in a unit Operation Readiness Rate of 91%. AAM
Jan 1995 - Apr 1995
Operation Uphold Democracy (Haiti)

Deployed as a UH-60 mechanic with the 4/25th AVN BN. Maintained aircraft readiness rate of %80 during deployment to Cambodia. AAM