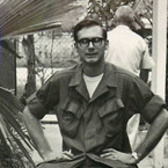 After active duty Air Force, I worked at radio and TV stations in Florida, Hawaii, and Georgia. Worked in Law Enforcement in Hawaii and Georgia. In 1980 went to work for CNN as a broadcast systems design engineer working my way up to Director of Engineering, satellite radio division. I retired in 2000 and enjoying life in the slow lane. Ham Radio operator, W4SKB

May 1970 - Apr 1971
Radio TV Production Specialist
HQ 7th Air Force | Tan Son Nhut Air Base, Vietnam
Combat journalist. Combat Photography. TDY to every Air Force installation in Vietnam to document military operations via still photography and audiotape recordings. Several TDY operations were aboard C-130 Aircraft during the Search and Rescue of downed pilots. I was tasked with additional duty on arrival at Tan Son Nhut AB to provide HF Radiotelephone patch communications for Ambassador Ellsworth Bunker to his wife, the Ambassador to Nepal. It was in my service record that I held an Amateur Radio (Ham) license so I went to the MARS station to run the patches. Due to the fact that the phone patch had to be on Ham Radio frequencies and not military frequencies I received the assignment and ran the patch once a week.
May 1969 - May 1970
Information Specialist
6486 Air Base Wing | Joint Base Pearl Harbor-Hickam, HI
I was responsible for setting up all press conferences for CINCPAC Admiral John McCain. Later, my OIC tasked me with setting up a radio network feed between the Hickam AFB Base Operations building and local civilian radio media, providing coverage of the Apollo 10 and 11 Mobile Quarantine Facilities arriving from Pearl Harbor. There were a total of 24 radio stations taking this feed.
Jan 1968 - May 1969
Radio TV Production Specialist
6213 Support Sq | Taipei, Taiwan
I was assigned to the Armed Forces Radio Station (AFNT) in Taipei, Taiwan. I arrived just as the station was in the process of moving from downtown Taipei to the top of Yandmingshan mountain. The station consisted of one AM, one FM, and two shortwave broadcast facilities. We did have better studio facilities on the mountain with separate studios for AM and FM. The shortwave transmitters duplicated the AM radio feed. We had an extensive library of all genres of music and most of the old-time radio shows like Gunsmoke, The Shadow, and many more. Of all my assignments, this was the plum.