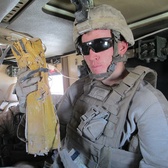 Ever since I was 10 years old, when our country was attacked by Islamic extremists, I wanted to be a United States Marine. I finally achieved that dream at the age of 18. I served for four years as a Rifleman and deployed to Afghanistan twice. I am now a husband, father of two, and a published author. 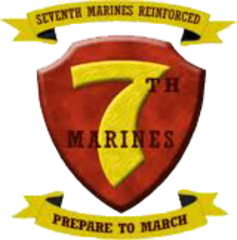 Radio Operator (Platoon and Squad)
L Co, 3/4, 7th Marines, 1st MARDIV | Twentynine Palms
Served as an 0311, but also had to become just as proficient with radios as an 0621. Was the squad radio operator on my first deployment, where I was awarded the Navy and Marine Corps Achievement Medal with Combat Distinguishing Device. Still a Lance Corporal, I became the platoon radio operator (this billet is usually held by a sergeant) for my second deployment.

The Darkside was tasked with holding key positions in Helmand, with an endstate of either dismantling or handing over to ANA forces these positions. Lima Company had the honor of holding and handing over the storied FOB at Now Zad, which has been a point of contention between ISAF forces and Taliban insurgents since 2006.
Apr 2011 - Oct 2011

The Darkside was tasked with protecting a stretch of Route 611. To facilitate this, Lima Company was sent into the Green Zone of the Upper Gereshk Valley with the mission statement of flushing out Taliban fighters and keeping their attention on us and not the contractors working on the road.

B, Political Science And Philosophy