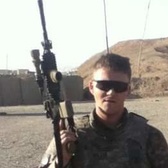 Spent 4 years AD and 2-3 years NG. 2 deployments, both to Iraq one as a Bradley Gunner the other as a rifleman. Now I sell insurance and am always looking for that next vertical move. Love shooting guns, watching sports and playing games.

Rifleman
A Co, 2-12 CAV, 1st BCT, 1st CAV | Fort Hood
Spent the first two years as a rifleman and the second two as a Bradley gunner. Unit was originally 367 4th ID, but on the day of my arrival we reflagged to 1CAV. When assigned to the unit the vets had just got back from Rustymiah about 6 months ago. We geared up for Nasiriya and a year after we got back from that trip we went to Kirkuk.
Aug 2007 - Dec 2007

Recruit
D Co, 3-330 IN (OSUT), 4th BDE, 95th TD | Fort Benning, GA
I learned what makes the grass grow as well as how to engage with destroy the enemies of the United States of America in close combat. I did lots of running and plenty of push ups and survived pneumonia as well as several fire ant attacks.

Ran checkpoints, and helped train Iraqi Army in Kirkuk. We were based out of a FOB, but would do 2-3 rotations out to the checkpoints. Much easier than our first one.
May 2008 - May 2009

Helped secure local elections and train local police forces, also worked with Peshmurgha forces. Most of the deployment was spent at a COP, it wasn't the Hilton but it worked.