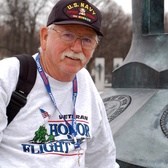 Deployed on USS Ranger Attached to VF21 as AME shop supervisor. ON April 5 we collided with super tanker m/v Fortune severely damaging the tanker and causing significant damage to our bow.Spent most of the cruse in dry dock.
Mar 1973 - Nov 1973

Deployed on USS Coral Sea Attached to fighter squardon 111. Spent half the cruise in the Tonkin Gulf off the coast of Vietnam.
See 2 more