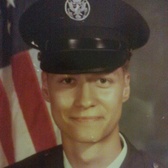 Jul 1980 - Jul 1984
Telecommunications Specialist
Det 1, 2166 Comm Sqd | RAF Wethersfield UK
Little of my 4 years would be of much interest to most Vets, but for myself, receiving a particular TS message in October 83' stood out in a big way.... I received/sorted the message concerning the 1st Battalion 8th Marines who beyond tragically lost 220 Marines, 18 Sailors and 3 Soldiers; along with 58 French military personnel, 6 civilians and 2 terrorists...Remember being a sucky day and prayers going out.... It was obviously a shocking message to receive as we as a nation had not been in any attacks since Nam..If recall correctly President Reagan was all over that one behind the scenes...

Telecom Operator Specialist, and was Operator 16 at the switchboard for 2 yrs. Unfortunately not the greatest of support for younger Airmen in our Squadron, and a supervisor that frustratingly massively abused his power was the main reason for my giving up on my plans to stay in to retirement. Incredibly, recently became friends on facebook with a girl who I worked with, and her experience was even worse. Actually apologized to me for not following through on a serious complaint about this individual. That is that for whining as other than that, I loved the military and massively regret allowing myself to be pushed out. Young and stupid I guess.lol