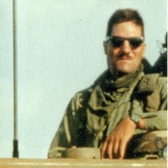 I have been with my current employer for over 28 years. I handle almost all day to day operations in the plant. I started out in Maintenance as a millwright and moved up from there. I am the Head of Maintenance and Purchasing also the Safety and Personnel Manager. My wife and I also have our own metal art business. Renos Wilderness Art. Check renowildernessart.com to see some of our work. Welding and fabrication, equipment design and istallation, electrical, phaumatics and hydraulics. Logistics and personnel management. design safety plans for new equipment. Administer plant safety plan.

Feb 1985 - Nov 1986
Squad Leader
C Co, 3-7 IN, 197th IN BDE | Fort Benning, GA
Went to basic and AIT at Ft. Benning. Spent my first 2 years in Berlin, with the 2nd Bn, 6th Inf. and the 4thBn, 502 Inf. Most of our training in Berlin was for Urban Combat. We had a huge training center for it. Also went to Italy for a month of winter training in the Alps. Came back to the states in Feb. of 1985 Went to Desert training at Ft. Irwen, and in 1986 went to desert training at 29 Palms. Most of our training at Ft. Benning was in support of the different schools and programs they were running there. I was able to move up through the ranks pretty quickly. Went from E-1 to E-4 in a year, went to my first E-5 board with less than 2 years. Had to have a waiver for time in service and time in grade. Was promoted to E-5 after I was at Ft. Benning.

Spent 2 years in Berlin, with training in Italy. Tense Time in Berlin, lots of anti American protests. Marine barracks had been bomded in Beruit at that time. We were getting a lot of bomb threats. Compound was not set up for this type of threat. A lot of barracks were right along the fence lines.