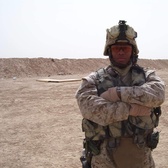 I entered this plane with a highly progressive mindset, with the attitude and skills to make the world a better place. The key word for me is freedom. I'm naturally versatile, adventurous, and advanced in my thinking. The greatest lesson I've learned & teach others is to Learn why some people make dream after dream come true, while others just continue dreaming and spend their lives wasted I'm an Author, Who hails from very humble beginnings, I can be compared to the Phoenix from the ashes of my pass being homeless i raised as a Master Career Strategist, a consummate entrepreneur with a passion for studying Human Behavior, personal development, Psychology, philosophy and creating strategies that actually work. My expertise has helped Fortune 500 companies, including Chevron, Wal-Mart stores, Walgreens, intel, and others.

Aug 2004 - Dec 2015
Detachment Commander
MSG Echo Co | Madrid, Spain
At a diplomatic post, the detachment commander and RSO form the Post Security Team. Their relationship is the key to the security program's success. The RSO is overall responsible for all internal and external security programs, as well as all background and criminal investigations. The detachment commander is ultimately responsible to the Chief of Mission, but normally reports to the RSO on day-to-day issues. At larger posts with several RSOs, the detachment may report to one of the Assistant RSOs. The detachment commanders are responsible for the operation of the detachment and are considered "commanders" by the Marine Corps. This is a unique distinction because it is one of the very few times a staff noncommissioned officer (SNCO) can officially carry this title.
Jun 2002 - Aug 2004
Platoon Sergeant
Fox Co 2/3 | Kaneohe, HI
The infantry unit leader assists commanders and operations officers in the training, deployment and tactical employment of rifle, weapons, LAR, and antitank platoons/companies and infantry, and LAR battalions, are proficient in all the infantry weapons systems. They supervise and coordinate the preparation of personnel, weapons and equipment for movement and combat, the establishment and operation of unit command posts, the fire and movement between tactical units, the fire of supporting arms, and the unit resupply and casualty evacuation effort. As a platoon sergeant or section leader in the rifle, scout sniper, weapons, heavy machinegun, LAR, and anti-armor platoons, he advises the platoon commander on all issues of discipline, morale and welfare.

Responsible for providing light anti-armor, breaching, and demolitions support for the rifle Companies in an Infantry Battalion. The section is also called upon to eliminate bunkers and breach urban targets with the MK153 SMAW. Responsible for the discipline, appearance, training, control, conduct, and welfare or the section at all times.
Jan 1995 - Aug 1995