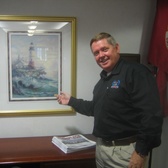 I have owned my business consulting firm for over 25 years while a member of the Army Reserves. Blessings include the ability to attain, sustain, and grow two careers simultaneously. The closer I get to the senior decision table the better my skill sets are realized, but I remember how each decision impacts those who accomplish the work. If the goal is change and improvement, start here.

Was attached to EUSA as wartime advisor as S4/S3 operation to work directly with Korean government to rework wartime planning and movement loads.
Jun 1988 - Jul 1988
Canada

As HHD Commander and BN S1 trained with another Maintenance BN (Fwd) and members of the Canadian forces.
May 1981 - Jun 1981