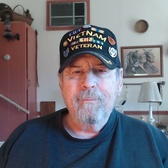 Born and raised south of Boston, Mass. in 1946. Graduated high school in June 1965 and entered the Air Force on June 25, 1965. Served until October 25, 1969. My overseas tour was for two years and ten months; mainly at Yokota Air Base, Japan, Danang Air Base, RVN and CamRanh Bay Air Base, RVN. After the military I went to night school at UMass Boston and graduated with a Bacholers in Economics